Reptile surprise in carton that sailed from Colombia

The workers were scared but they did not respond with violence; instead, they alerted the forest department 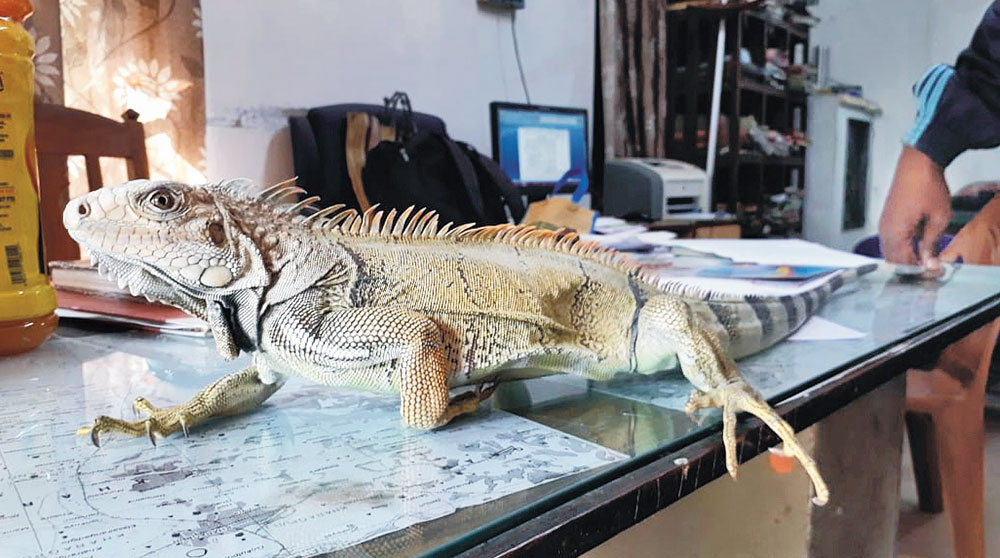 A Colombian landed in West Midnapore after a two-month voyage via Singapore.

The stowaway is a 3.5ft-long reptile with a scaly beard and a row of spines along its back and tail. Workers at a factory about 40km from Kharagpur town, in West Midnapore district, found the green iguana on Tuesday in a container that arrived from Colombia.

“It was like a lizard several times bigger and weirder. It was slunk in a corner,” one of the workers said.

The workers were scared but they did not respond with violence. Instead, they alerted the forest department.

“The reptile, pregnant and looking for a safe place to lay eggs, seems to have sneaked into the container before it was shipped,” an official said.

“It is a miracle the animal survived without food and water for two months,” said Arup Mukherjee, divisional forest officer of Kharagpur. “Faced with the scarcity, the young female stayed in hibernation for a long time. But even then, the survival is astonishing.”

The animal has travelled close to 11,000 nautical miles (20,372km) from the Latin American country, the voyage including a stopover in Singapore.

The container was shipped from Cartagena, a port on Colombia’s Caribbean coast, on January 9. “It was transferred from one vessel to another in Singapore,” said a senior official of the Mumbai-headquartered plastic manufacturing company that owns the Kharagpur factory.

The container arrived at Kidderpore dock on March 15 and reached the factory, off Odisha Trunk Road, a day later.

The container contained around 100 bags of PVC Resin, a raw material used to make pipes and protective packaging. “The bags were being taken out by a forklift when the driver noticed something moving on one of the bags. He alerted others. A reptile that looked like a mini-dragon was resting on the bag. On the next bag, there were some eggs,” said Prosenjit Lahiri, the chief safety officer of the factory, who got in touch with the forest department.

With a row of spines along its back and long tail, multitude of skin textures and a scaly beard or dewlap under its chin, a green iguana does look like a mini-dragon. With long sharp claws, they are excellent climbers. Though called green iguanas, the reptiles can sport multiple colours.

“The adults become more uniform in colour with age, whereas the young may appear more blotchy or banded between green and brown. The colour of an individual may vary based on its mood, temperature, health, or social status,” says the website of Animal Diversity Web, a US-based online database of animal natural history, distribution, classification and conservation.

The one found in the factory weighs around 1.5kg and is over 1.08m long.

After a primary examination by a vet in Kharagpur, the iguana was given a mash of fruits, carrots and lettuce leaves at the forest department office. On Wednesday, it was brought to Alipore Zoo Hospital, where it will be kept under observation. “It will be kept at the hospital for at least a month,” said Asis Kr Samanta, the director of the zoo. “The zoo vets will try to artificially incubate the eggs.”

Green iguanas are “found in tropical forests and spend a lot of time camouflaged in the trees but adjust well to more open areas. No matter where they inhabit, they prefer to have water around as they are excellent swimmers and will dive beneath the water to avoid predators,” according to the ADW website.

The zoo has never handled a green iguana before. “The climate is not going to be too different here (compared with Colombia). The iguana looks weaker because of lack of exposure to sunshine for so many days. It will get the sunlight it needs at the hospital and the zoo,” he said.

The green iguana is arguably the most common reptile in the pet trade today. Almost one million of them are imported into the US annually as babies, according to conservative estimates.