It will largely help the people of north Bengal, especially the business fraternity and patients who need better treatment in Calcutta 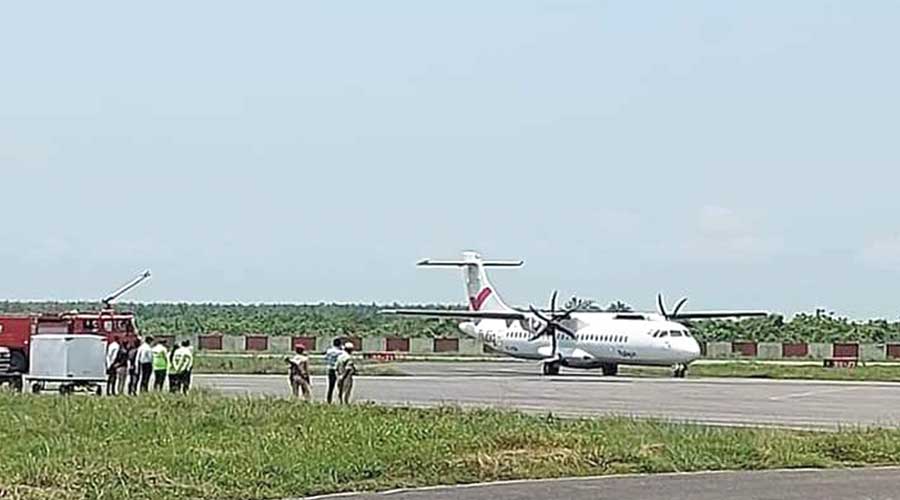 A World War 2-era airport at Rupsi in Assam’s Kokrajhar district reopened after 35 years on Saturday, bringing cheers to the residents of Cooch Behar and Alipurduar districts in Bengal as they could avail themselves of flights after a two-hour travel by road.

Alipurduar and Cooch Behar are the two districts located farthest from Calcutta. For the people of these two districts, they have to travel by road for around four hours to reach Bagdogra, their nearest airport located around 200km away.

Rupsi, on the other hand, is just 70km from the two districts.

Prasenjit Dey, the secretary of the Alipurduar Chamber of Commerce, said there had been a longstanding demand of the residents of the two districts that the Cooch Behar airport, which was operational during the royals’ regime, be reopened. “A number of initiatives were taken up by both the state government and the Centre to reopen the Cooch Behar airport, but all such efforts were short-lived. It is good that the Rupsi airport has reopened. We can now easily take flights to Guwahati and Calcutta. It is just a one-and-a-half hours’ road ride to reach Rupsi,” said Dey.

The airport, sources said, has been made operational under the RCS-UDAN (regional connectivity scheme) of the Centre. On Wednesday, a trial run had been conducted and flight operations formally resumed on Saturday.

On Saturday, an ATR 72 aircraft carrying 24 passengers from Guwahati landed at the Rupsi airport. Later, the flight departed for Calcutta.

The airport has 10 check-in counters and is located on 337 acres of land.

Tour operators have welcomed the development. They said a considerable number of tourists who entered Bhutan via Phuentsholing, the commercial capital of the neighbouring country and the most popular transit point located around 40km from Alipurduar, could avail themselves of flights at Rupsi.

“Tourists used to disembark flights at Bagdogra and then take car to reach Phuentsholing. More than four hours are needed for travel from Bagdogra to Phuentsholing. But now, it would hardly take two hours to reach the border town from Rupsi. Tourists bound for Jaldapara National Park and Buxa Tiger Reserve in the eastern Dooars can also take the Rupsi flights,” said Biplab Dey, the secretary of the Dooars Tourism Development Forum.

Also, Bhutanese nationals staying in and around Phuentsholing can avail themselves of the flights from Rupsi, instead of travelling for six hours to reach the Paro airport near capital Thimphu. The Rupsi airport caters for lower Assam districts like Dhubri, Kokrajhar, Bongaigaon and Goalpara.

“It will largely help the people of Cooch Behar, especially the business fraternity and patients who need better treatment at Calcutta or other places. We had expected a similar service here but it is good that we have an airport close to us now,” said Narayan Modak, the president of the Cooch Behar Byabsayee Samiti.