A fallen occult practitioner, created by Bibhutibhushan Bandyopadhyay and continued by son Taradas, is getting resurrected in print and installation art. Taranath tantricwill not only star in a graphic novel, based on one of Taradas's stories, but will also have a house temporarily recreated as the former tantric's lair. 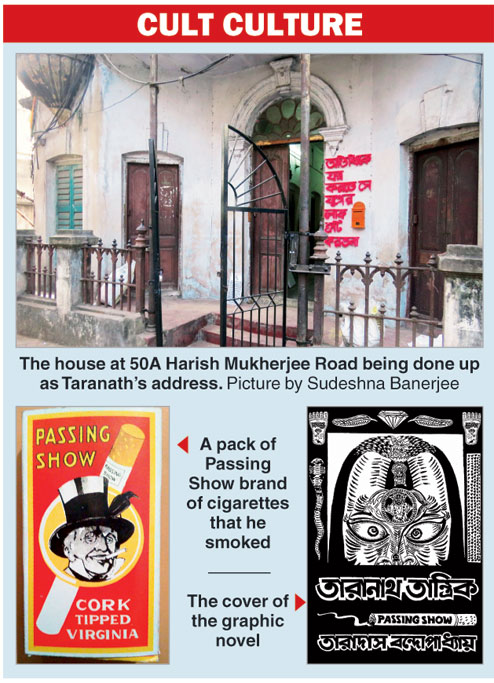 Jan. 24: A fallen occult practitioner, created by Bibhutibhushan Bandyopadhyay and continued by son Taradas, is getting resurrected in print and installation art. Taranath tantricwill not only star in a graphic novel, based on one of Taradas's stories, but will also have a house temporarily recreated as the former tantric's lair.

Taranath used to stay in a house in central Calcutta after having lost his supernatural powers because of malpractices.

Bibhutibhushan had written two stories on the figure and his son a couple of dozen more. "Taradas describes this genre, quoting British evolutionary biologist J.B.S. Haldane: 'The universe is not only queerer than we suppose but queerer than we can suppose'," points out Surojit Sen of OddJoint, the artists' collective behind this venture.

The Bengali graphic novel, titled Passing Show, is named after the brand of cigarette he smoked. Illustrated by Sambaran Das and scripted by Sen, it will be launched on Wednesday afternoon at Victoria Memorial at the Tata Steel Kolkata Literary Meet (Kalam), held in association with The Telegraph, while Taranath's house at 50A Harish Mukherjee Road will receive visitors from January 27 to 29 from 5pm to 8pm.

The building is old and slightly run-down, which fits the requirement. "The stories are set in the 1940s. It harks back to a time when Bengal villages were self-reliant, insulated from outside influences and rooted in folk traditions," says Sen, the co-writer of Q's film Gandu, who is the brain behind the initiative.

Outside the house, a stone slab carries the words from Bibhutibhusan's first story on "Taranath Jyotirbinod", the "astrologer and palmist" soliciting clients. Inside is Taranath's meditation spot. An ant hill reaches ceilingwards with idols of lesser gods like Shani and Manasha, their paint peeling off, sticking out.

In the next room is a terrible figure - jet black, reddish eyes, three heads, six hands and legs, with thorns sticking out from the body. "This is Jwarasur, as described by Taradas in one of his stories, who has to be appeased for high fever to subside," says Sen. "The creator is from Kalighat specialising in the terrible forms of Kali worshipped in Chetla," says artist Sumantra Mukherjee.

Across the corridor in a room is the panchamundir asan, the seat of power propped up with skulls of five different creatures, including a man's. The fourth room is his drawing room.

At the Kalam launch, skull-shaped sandesh will be distributed. The graphic novel is coming out under the Kalam imprint. "We are celebrating a slightly underrated character in Bengali literature. The medium is funky and will reach out to the younger generation. Our aim is to make readers want to rediscover the original texts," said Malavika Banerjee, Kalam director.

Tathagata Banerjee, Bibhutibhushan's grandson, who will take part in a discussion on Taranath at the launch, welcomes the initiative. "There isn't much in Bengali in the paranormal genre and graphic novel is fit for this age and lends itself well to this format," he said.