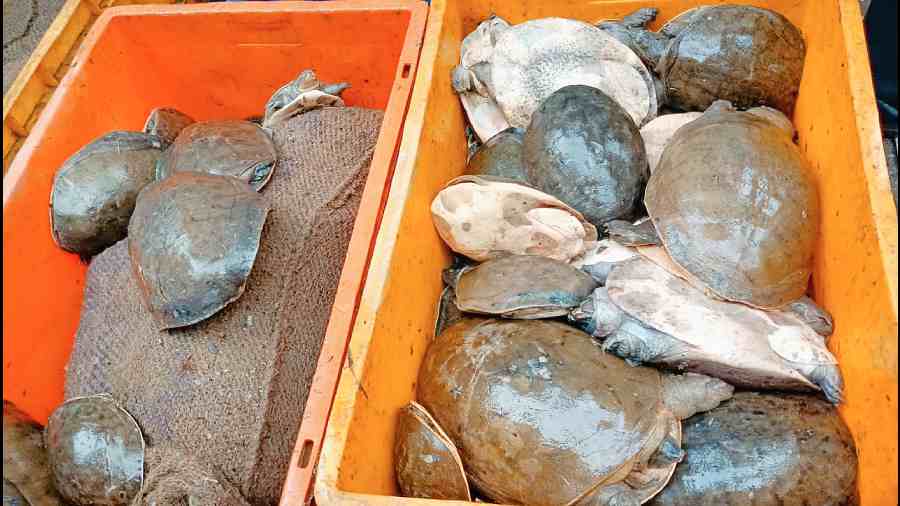 Some of the Indian softshell turtles seized from Swarupnagar on Sunday.
Pashupati Das
Subhasish Chaudhuri   |   Calcutta   |   Published 30.05.22, 01:35 AM

The endangered species of turtle is generally found in the lower middle stretch of the Ganga and its tributaries connected through Bangladesh. The turtles were seized after they had been smuggled in from Bangladesh and were being sent to the Swarupnagar market.

Police have arrested two persons from Charghat village of Swarupnagar for allegedly stocking and smuggling the turtles.

Acting on a tip-off, a team of wildlife department officials conducted a raid on a stockyard where the two accused — Swapan Banik and Sukumar Roy — were loading the turtles onto a truck after packing them in jute sacks.

Barasat forest ranger Bhaskarjyoti Pal said: “We came to know from a reliable source that a huge consignment of Indian softshell turtles, suspected to have been smuggled in from Bangladesh, was being sent to the Calcutta market from Charghat village. We got it confirmed by local sources and conducted raids a little before the smugglers were set to leave for Calcutta.”

“We seized over 50 sacks, from which 450 turtles were recovered. They are worth around Rs 3.5 lakh,” a forest officer said.

“We are trying to find out if the accused duo have any link with international racket of smugglers involved in the sale of turtles and other animals,” the forester added.

According to the guidelines of the International Union for Conservation of Nature’s (IUCN) red list, the Indian softshell turtle is considered to be vulnerable because of multiple threats, particularly because of loss of habitation, poaching and trapping for illegal sale.

The seized turtles were later sent to the wildlife department’s Salt Lake office for medical examination before they would be released into the river.

“The turtles will be released into the suitable stretches of the river once we get a clearance from the court,” a senior official of the wildlife department said.

The accused Banik, a resident of Bongaon, and Roy, a resident of Swarupnagar, were produced in the additional chief judicial magistrate’s court in Basirhat and remanded in five days’ police custody.