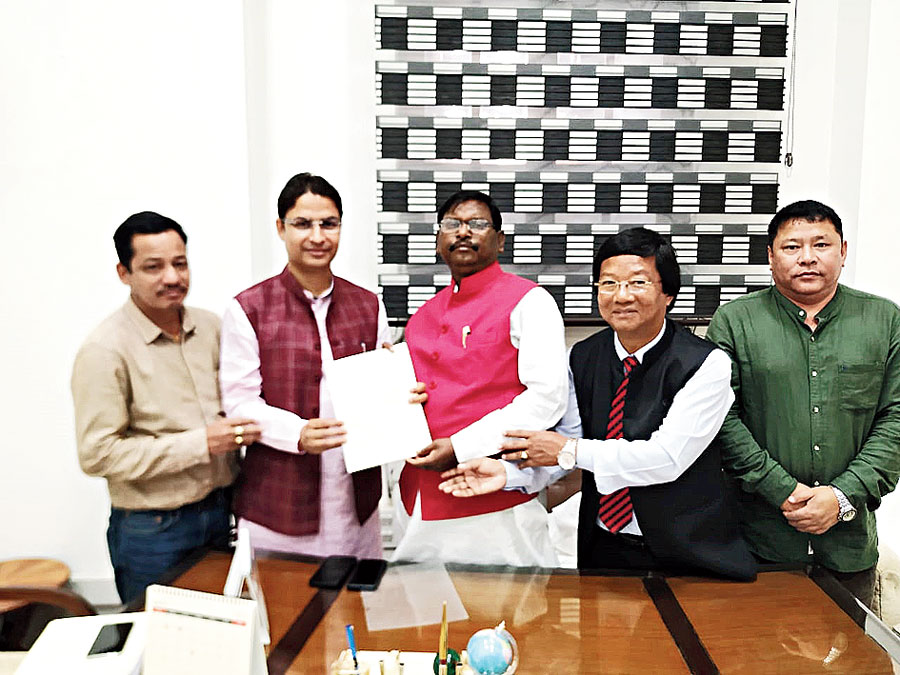 MP Raju Bista on Thursday requested Union tribal affairs minister Arjun Munda to stop the construction of the Sevoke-Rangpo railway line till all norms and requirements under Forest Rights Act (2006) were fulfilled to the satisfaction of local communities.

The ministry of tribal affairs is the executing authority of The Scheduled Tribes and Other Traditional Forest Dwellers (Recognition of Forest Rights) Act, 2006 (also known as Forest Rights Act, 2006).

The Darjeeling BJP MP said in a written statement that he had informed Munda that the railway project was “negatively” impacting around 800 households at 24 forest villages in Bengal. The MP alleged that the Forest Rights Act had not been properly implemented in the state and the villagers were being deprived of fair compensation and rehabilitation though the state government had received “all dues” from the ministry of railways.

“I therefore requested Hon’ble Munda ji to kindly put a stop to Sevoke-Rangpo rail line construction, till all the norms and requirements under Forest Rights Act (2006) is fulfilled to the satisfaction of local communities,” reads Bista’s statement.

The MP was part of a delegation that met Munda in Delhi on Thursday.

The 44.98km-long line will put Sikkim in the country’s railway map.

Bista said the tribal minister had assured the delegation that he would instruct the Bengal government to implement the Forest Rights Act at the earlier. “Hon’ble Munda ji also informed us that he would send a team of experts to ascertain the hardships being faced by Forest Dwellers in the districts of Darjeeling and Kalimpong, and take necessary action to provide relief to the people here,” said Bista.

Asked about the alleged non-implementation of the Forest Rights Act, Lila Kumar Gurung said: “The 165 forest villages in the GTA area have not yet been notified as a revenue villages through a gazette notification as mandated by the act.”

He said land rights of community assets like school, hospital and playgrounds had not been given to village gram sabhas. “Community rights like grazing rights should also be handed over the community forest governance committee,” said Lila Gurung.

“Most importantly, the gram sabhas of 24 forest villages have not yet given no-objection-certificates to the railways for the project,” the leader said.

Darjeeling district magistrate Deepap Priya P. could not be contacted immediately for comments on the remarks by Bista and Lila Gurung.

Although the rail project had been sanctioned in 2009, the work started recently. Almost 86 per cent of the tracks will pass through underground tunnels, each of which will have a diameter of 8m.

The railways are hopeful that if everything goes according to the plan, the project can be completed by June 2021.

The project is being executed by AMBERG Engineering in Switzerland, US-based AECOM and D2 Consults PEMS in Austria.

Bista also said Munda had told the delegation that he would find out the status of the process to accord tribal status to 11 Gorkha communities.