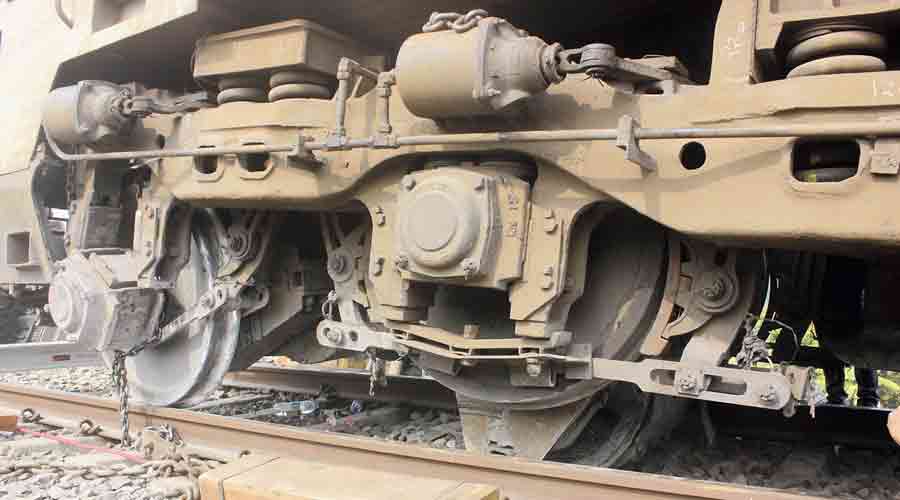 Railway minister Ashwini Vaishnaw on Friday hinted at the possibility of a mechanical error in the locomotive as the reason for the derailment of the 15633 Bikaner-Guwahati Express.

Vaishnaw, who visited the accident site at Domohoni in the Maynaguri block of Jalpaiguri district on Friday morning with senior railway officials, said: “I have inspected the tracks and the locomotive. It seems there has been an issue with one of the parts of the locomotive. But it has to be dismantled from the locomotive so that the signs can be studied to ascertain the problem. There is no issue of speed or the tracks.”

The minister asserted that the commissioner of railway safety would conduct an inquiry and the Railway Protection Force was also investigating.

A railway employee said: “The train was travelling at a speed of around 95km when the driver slammed the brakes and this led to the derailment of some of the coaches.… There must have been some problems with the tracks.”

The minister was asked as to why old ICF coaches were still being used instead of LHB bogies, which are considered safer. “We have taken the task of gradually phasing out ICF coaches. After 2009, production of ICF coaches stopped and only LHB coaches are being made now,” said Vaishnaw.

Even the Comptroller and Auditor General of India (CAG) noted that more people had lost their lives or suffered injuries in train accidents where ICF coaches (manufactured at the Integral Coach Factory in Perambur near Chennai) as compared to the accidents (both collision and derailment) involving LHB (Linke Hofmann Busch) compartments (made at the Rail Coach Factory in Kapurthala).

Later in the day, Sanjay Chander, the director general of the RPF, visited Domohoni. He said the RPF was probing the derailment in association with Bengal police.

Latif Khan, the commissioner of railway safety, reached the accident site in the afternoon. He took stock of the damage and said the investigation would start on Saturday.

“We will check the loco, the coaches and the tracks. Records would be checked and all the railway staff, who were associated with the incident, will be called in for the inquiry,” said Khan.

The damaged coaches were removed from the spot. Vaishnaw called on the injured people at hospitals in Jalpaiguri and the North Bengal Medical College and Hospital in Siliguri. “The disbursal of the ex-gratia which has been announced by the railways for the next of kin of the deceased and the injured has already started,” he said.