To resume train connectivity on the route, around 4.5km of rail tracks have been laid on the Indian side (till the international border) while on Bangladesh side, 7.5km of tracks have to be laid 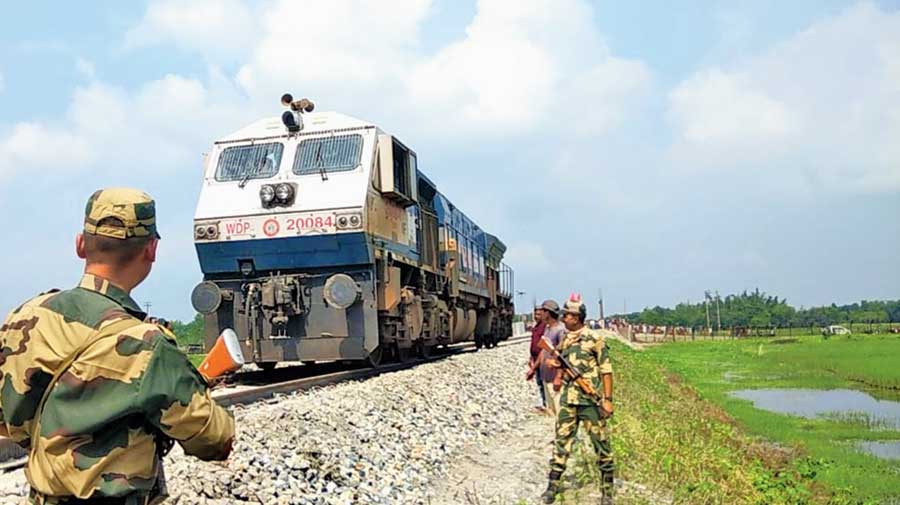 The railway engine at the no-man’s land on India–Bangladesh border during the trial run along Haldibari-Chilahati route on Thursday.
Biplab Basak
Our Bureau   |   Siliguri, Jalpaiguri   |   Published 09.10.20, 02:21 AM

Residents of Haldibari in Cooch Behar, and Chilahati in Bangladesh’s Nilfamari district, witnessed a historic  Thursday as a railway engine from India chugged into the no-man’s land on the international border after a gap of 56 years.

Till 1965, trains would run via Haldibari-Chilahati. Even prominent passenger trains from north Bengal would take this route to reach Calcutta. The India-Pakistan war stopped train movement on this route.

In 2018, both the countries decided to resume the rail route — the fifth such route between Bengal and Bangladesh.

On Thursday, hundreds of residents assembled on both sides of the border to witness the trial run. The engine that reached Haldibari station from New Jalpaiguri, moved towards the border amid loud cheers and claps.

As it moved through a gap of the fences and reached the no-man’s land, waiting Bangladeshis, likewise, clapped and cheered.

The engine halted at no-man’s land where senior officials of Indian Railways and Bangladesh Railway (Bangla Rail) greeted each other and discussed the progress of the project in presence of India’s Border Security Force and the neighbour’s BGB (Border Guard Bangladesh) personnel.

“It is an important day for Haldibari residents. We have heard from our seniors about the rail route that is closed for over a half-a-century now. Now we hope to witness railway services along the route again. If trains bound for Calcutta are run on this route, it would save much time,” said Bulu Mohammad, a Haldibari resident.

“An engine conducted a trial run from Haldibari station to the no-man’s land. It was successful. On the Indian side, the track laying work is complete. Some other ancillary works are yet to be done and we believe those would end by December this year,” said S. Chanda, the chief public relation officer of Northeast Frontier Railway (NFR).

Abdur Rahim, an executive engineer of Bangladesh Railway who is looking after the project, said on their part, the track-laying work had reached its final phase. “We hope to conduct trial runs along the entire route in another couple of weeks. Work is on in full swing,” said Rahim.

To resume train connectivity on the route, around 4.5km of rail tracks have been laid on the Indian side (till the international border) while on Bangladesh side, 7.5km of tracks have to be laid, said sources.

The CPRO, when asked when the rail route would be opened, said it would be decided through bilateral talks.

Sources hinted the route is likely to be operational by March next year.

“Initially, it has been planned to run goods trains along the route. But from both countries, there is a steady demand of citizens for passenger trains,” said a source.