Two workers of Sevoke-Rangpo railway construction washed away in Kalimpong 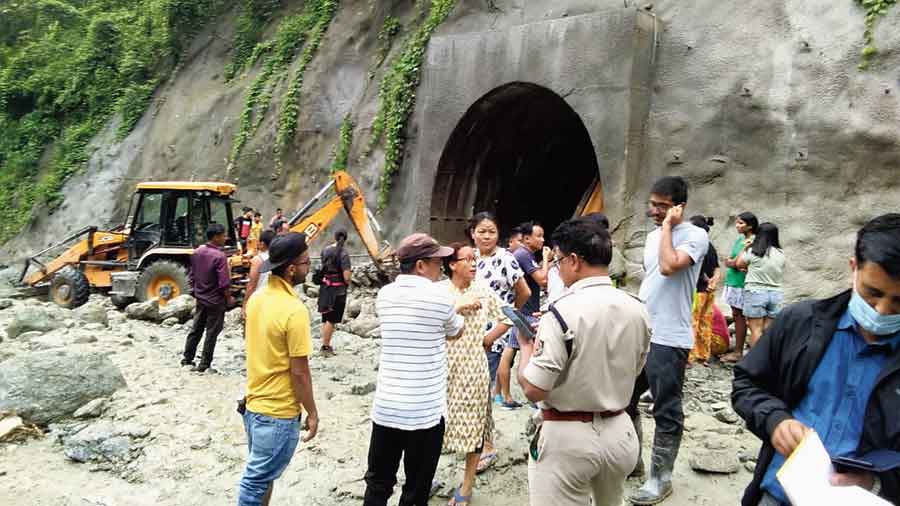 Two labourers of the Sevoke-Rangpo railway construction project were killed when a rivulet swollen because of incessant rain apparently swept away their tent in Kalimpong district early on Friday.

Three more workers went missing and two suffered injuries in the tragedy that happened after a landslide had brought boulders to the Mamkhola rivulet which swelled up in the impact.

“A rivulet at Rangpo (near the Bengal-Sikkim border) rose after intense rain caused boulders to fall into the water this morning,” said Hari Krishna Pai, the superintendent of police, Kalimpong. The site is about 23km from Kalimpong town.

The deceased were Dhan Singh Bhandari, 35, a citizen of Nepal, and Ronit Tirkey, 19, of Alipurduar district. Bhajan Das and Alok Dera, both in the age group of 35-40 years and residents of Cooch Behar district, suffered injuries and were admitted to a hospital in Sikkim.

Arun Rai, 24 of Tarkhola, Bikash Tamang, 22, of Sangsey and Nepali national Damber Ram, 50, are still untraceable. Tarkhola and Sangsey are in Kalimpong district.

Sources said the labourers had pitched a tent just outside a tunnel that was being constructed as part of the railway project near Rangpo. “We suspect the tent was swept away between 1am and 2am,” said a local resident.

Heavy machinery on the site was also damaged by the swollen rivulet.

This is the second time in the past two months that workers involved in the Sevoke-Rangpo railway project are killed. On June 17, a 2m rock had crashed on labourers working in an under-construction tunnel at Bhalukhola, which is very close to the latest accident site, killing two and injuring five.

Almost 86 per cent of the 44.98km link connecting Bengal with Sikkim will run through 14 tunnels. Each tunnel will be eight meters in diameter. The Rs 4,000cr project is scheduled to be completed by December 2023.

Wing Commander (retd) Praful Rao, founder, Save The Hills, a non-profit organisation working on environmental issues, said Kalimpong had received a rainfall of 200mm in a span of 13 hours starting from 11am on Thursday.

“The intensity of the rainfall in a short span of time has caused a lot of damage in Kalimpong. From government agencies to civilians, we must always remain vigilant, get our resources ready and undertake simple activities like clearing drains at regular intervals,” said Rao.

Apart from the Mamkhola incident, a number of landslides were reported from various parts of Kalimpong and Darjeeling districts on Friday. Houses and cars were damaged and three people suffered injuries in Kalimpong.

The NH10 that connects Sikkim with the rest of the country remained closed through most part of the day. A single lane traffic was thrown open around 4pm.