Many supporters seen demonstrating outside central agency's office and Raj Bhavan, prompting police to push them back 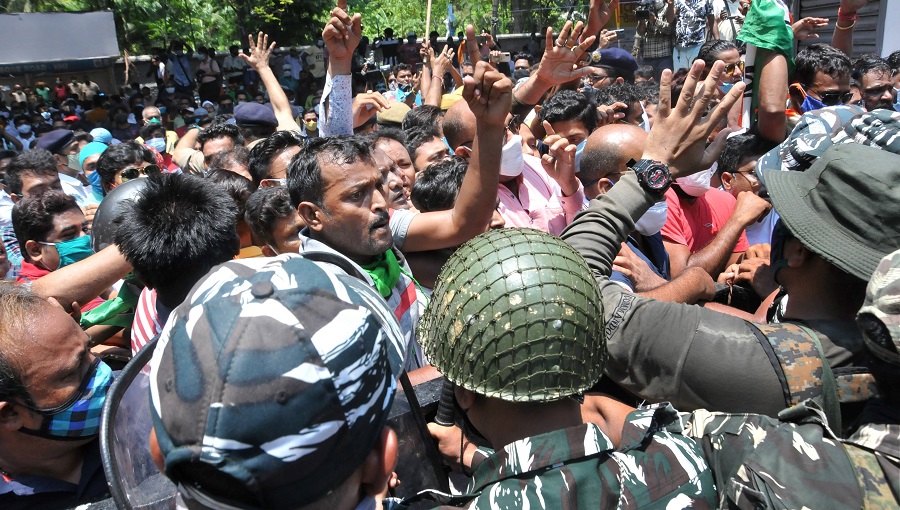 Hundreds of TMC activists on Monday took out protest rallies in the city and elsewhere in West Bengal, thumbing their noses at lockdown regulations, after the CBI arrested two state ministers, an MLA, and a former party leader in connection with the Narada sting case.

Many of them were seen demonstrating outside the central agency's office here and Raj Bhavan, prompting the police to push them back.

The CBI, earlier in the day, apprehended state ministers Firhad Hakim and Subrata Mukherjee, MLA Madan Mitra and former party leader Sovan Chatterjee for their alleged involvement in the case.

The agitators, waving TMC flags, raised slogans outside Raj Bhavan against Governor Jagdeep Dhankhar, who had recently sanctioned the prosecution of the four leaders.

At the CBI's Nizam Palace office, the TMC supporters broke barriers set up before the main gate and took to sloganeering against Union Home Minister Amit Shah and Prime Minister Narendra Modi.

Some of them hurled stones and plastic bottles at the security personnel posted outside the agency office.

In several other areas, including Arambagh in Hooghly district and Kamarhati in North 24 Parganas, the protesters burnt tyres and blocked roads, demanding immediate release of party leaders.

TMC MP Abhishek Banerjee, who is also the party's youth wing president, urged the demonstrators to have faith in judiciary.

"I urge everyone to abide by the law & refrain from any activity that violates lockdown norms for the sake of the larger interest of Bengal and its people," the Diamond Harbour MP, who is also CM Mamata Banerjee's nephew, tweeted.

Sad- situation is being allowed to drift with no tangible action by authorities.

The party's spokesperson, Kunal Ghosh, taking a dig at the BJP, said that "the daily passengers to Bengal, who were summarily rejected by the people of the state during elections, have hatched a conspiracy for backdoor entry, amid this pandemic-induced crisis".

Ghosh, too, urged the party supporters to exercise restraint, and not get swayed by emotions.

He also sought to know why no action has been taken against Mukul Roy and Suvendu Adhikari, two leaders who have quit the TMC to join BJP, given the fact that their names had also surfaced in the case.

Rejecting the allegation, BJP state president Dilip Ghosh said both Roy and Adhikari had "co-operated with the CBI investigation, unlike those who have been taken into custody".

He slammed the protesters for openly flouting the lockdown norms.

"Instead of demonstrating on the streets, the party should seek a legal remedy," he added.

The sting operation was purportedly conducted by Mathew Samuel of Narada TV news channel in 2014 wherein people resembling TMC ministers, MPs and MLAs were allegedly seen receiving money from representatives of a fictitious company in lieu of favours.

The tapes were made public just before the 2016 assembly elections in West Bengal.

The Calcutta High Court had ordered a CBI probe into the sting operation in March 2017.