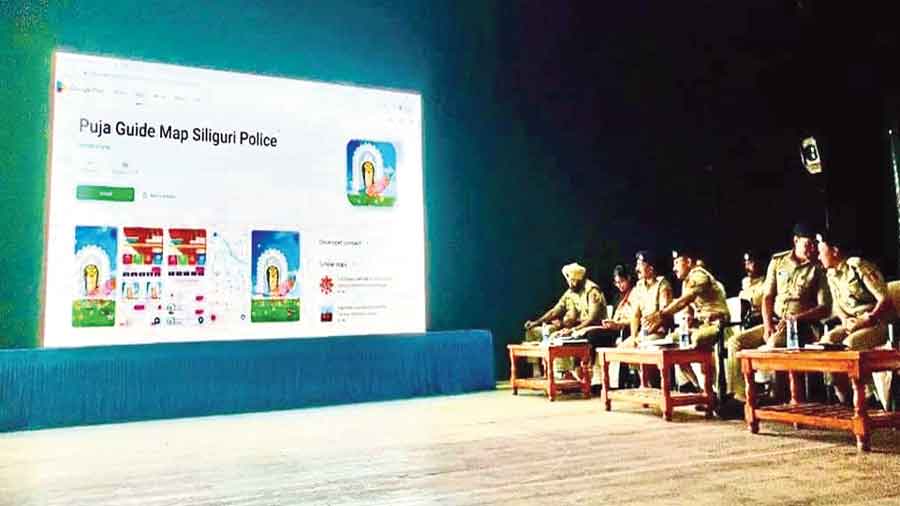 Durga Puja coordination meet organised by SMP in Siliguri where the updated version of the Puja app was launched.
Passang Yolmo
Binita Paul   |   Siliguri   |   Published 13.09.22, 02:48 AM

The Siliguri metropolitan police (SMP) have launched an updated version of its mobile application, introduced last year ahead of Durga Puja, which will assist and provide Puja related information to revellers during the festivities this year.

The latest version of the app called “Puja Guide Map Siliguri Police” was updated on September 7. It can be downloaded or updated from Google Play Store, police sources said. According to sources, the app contains a list of information including location of Puja pandals across Siliguri town and nearby eateries, emergency helpline numbers of police, update on traffic situation and other allied information.

A large number of people from neighbouring towns visit Siliguri for pandal hopping. “This app will help make Puja tour of Siliguri easier from them,” police said.The law enforcers foresee a major rush this year following two years of relative lull due to pandemic concerns. Keeping in mind the expected rush, various roads of the city will be kept closed, the sources said.Joy Tudu, deputy commissioner, SMP, said the app would help people get all necessary information.

“Apart from the app, the police assistance booths will also be opened at various places to assist people,” he added.In case of any difficulty, people can directly contact the police control room through the app.Drones will also be used during the Pujas for aerial surveillance, the police said.