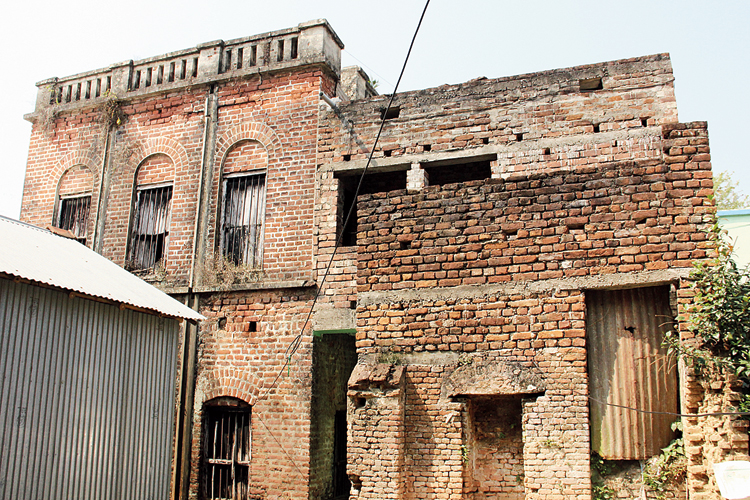 Nadia administration has begun a probe into alleged occupation of the residence and adjacent land of eminent Bengali poet Jatindranath Sengupta (1887-1954) at Haripur village in Santipur.

The district administration has been contemplating to build a memorial and a library on poet’s land as demanded by local people. But the illegal occupation of the land by two families coupled with no trace of the poet’s descendants, the actual owners of land, has come up as an impediment to the project.

Members of the Jatindranath Sengupta Smriti Raksha Committee, who lodged complaints against illegal occupation of the poet’s properties with the Nadia administration, demanded that the state government restore the poet’s home, set up a memorial and build a library.

The poet’s ancestral home is located on 3.5 cottah land in Haripur, on the outskirts of Santipur town, where he stayed until he joined the job of the estate engineer in the Cossimbazar Raj Estate. Many of his works were penned in Santipur.

“We will try to fulfil the demand as far as possible,” the BDO said. But a section of villagers thinks unless the descendants of the poet gave their nod, the district administration could do little.

A senior officer of the Nadia administration said: “Without a formal nod or acquisition no government project can be executed.”

At least two families, who have been staying at the poet’s home for the past couple of years, have made illegal constructions, claiming they were authorised to do so by the poet’s descendants. But they could not show any proof in support of their authorisation.

Local sources said since the late 50s, the poet’s connection with Santipur gradually came to an end. His two sons Nirmalkanti and Tarunkanti made occasional visits to the dilapidated home but never shown any interest to protect it.

They said since the late 60s, illegal occupants started grabbing the poet’s residential plot. For the last couple of years, Nila Debnath and Ashok Ghosh have been staying there claiming they had the permission of the poet’s descendants. But, members of the Jatindranath Sengupta Smriti Raksha Committee rubbished the claim.

Somnath Banerjee, a member of the committee, said: “The two families have been telling lies. They have been illegally staying exploiting the apathy of the poet’s descendants to protect his memories. Now they have been opposing our proposal to build a memorial for the poet. They have even threatened us.”

“We apprehend that they will gradually grab the entire plot removing the memories of the poet,” committee president Sumanta Banerjee said.

The sources said the poet’s son visited the home during his birth centenary celebrations in 1987.

“Then they used to live in Salt Lake and had come to inaugurate a plaque in the memory of the poet. But they never visited the land again,” said Kalyan Krishna Debnath, a schoolteacher, who had organised the event.

“But, we don’t know where they stay now,” he added.

Refuting the allegations, Debnath, who expressed ignorance about whereabouts of poet’s descendants, said: “They told us to stay, but have never come here during past several years. We have no contact with them for long.”

The two illegal occupants failed to submit any documents in support of their claim when BDO Santipur went there on Tuesday to conduct an inquiry.

The BDO said: “It is a difficult situation. The occupants have no documents even though they have been staying there for several years. On humanitarian ground we cannot evict them. But we will try to use the available land for building the memorial and a library.”

However, an officer of the district administration said: “Before taking up any such project we will try to trace the poet’s descendants for their approval.”

Sengupta, along with two of his contemporary poets Mohitlal Majumdar and Kazi Nazrul Islam, is known for heralding a new modern genre in Bengali poetry that in a way marked the breaking away from the influence of Rabindranath Tagore.

A civil engineer by profession, his poetic excellence is reflected in works such as Marichika, Marushikha, Marumaya, Trijama and in many other creations that earned him the label of an atheist and a pessimist.