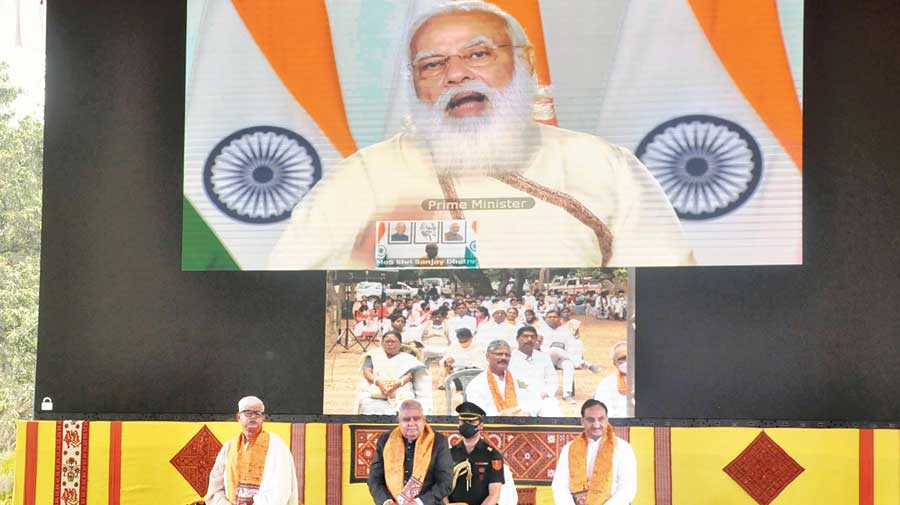 Prime Minister Narendra Modi on Friday tried to draw a parallel between Rabindranath Tagore’s vision of education and his government’s controversial New Education Policy saying both sought to build a modern India, but critics said the two ideas were as different as chalk and cheese.

Addressing the Visva-Bharati convocation virtually from New Delhi on Friday, Modi said: “The education system and process that Gurudev ensured in Visva-Bharati helped the then education system get rid of the shackles of subordination and make India modern. The New Education policy…will also help break the old shackles to give students freedom to show their excellence.”

Friday’s speech comparing the NEP to Tagore’s idea of education is Modi’s second attempt to link the vision of Visva-Bharati’s founder with the programmes of his government. Barely two months ago, while speaking at the centenary celebrations of Visva-Bharati, Modi had tried to connect his government’s Atmanirbhar Bharat project with Tagore’s idea of inclusiveness and self-reliance.

The attempt of the Prime Minister, who is also the varsity chancellor, to use Tagore as a tool to justify schemes of his government has run into criticism from Visva-Bharati alumni and senior officials of the university. The critics said the two ideas were not one and the same as Gurudev believed in making education inclusive and holistic, while the NEP sought to make it exclusive and inaccessible. They also raised questions about the varsity administration’s faith in the ideas that Tagore propagated.

“It is interesting that the chancellor is finding the ideology of Tagore to relate policies of his government schemes. Ironically, I have doubts whether the present varsity administration and the Prime Minister himself are practicing Tagore’s ideals. Tagore’s ideology of truth, courage, welfare and development for all is not followed by the government but contradicted when we see thousands of farmers fighting in Delhi against the farm laws and Modi refuses to listen to them,” said Dikshit Sinha, who retired as professor of sociology from Visva-Bharati.

Modi’s praise for his education policies came on a day when state education minister Partha Chatterjee criticised the NEP and said through it, the Centre wanted to privatise the education sector.