Plan for new terminal at Bagdogra

State requested to acquire land for second building at airport 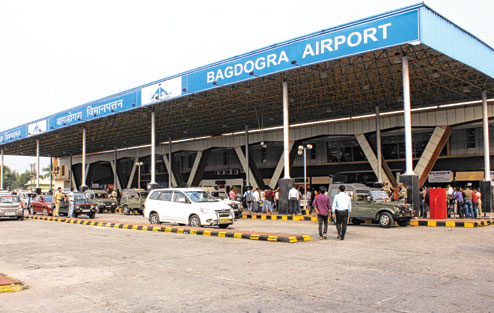 Siliguri, April 27: Officials of the Airports Authority of India today said they had proposed to build a new terminal at Bagdogra airport as the sate government couldn't provide land contiguous to the existing one for the extension.

The Bagdogra airport witnessed a passenger traffic growth of 40 per cent in the last fiscal compared to the 2015-2016 financial year. The existing infrastructure at the airport is ill-equipped to meet the increase in flights and passengers.

The AAI had mooted the proposal for the second terminal at a meeting its officials had held with state government representatives on April 25.

"Earlier, we had sought around 120 acres of land contiguous to the present terminal so that it can be expanded to meet the growth in passenger traffic at Bagdogra. But the government refused to acquire so much land and we had to scale down our project. We then sought around 50 acres," a source in the AAI said.

The state government apparently agreed to the proposal and zeroed in on four sites close to the airport.

"However, two plots were dropped for some reasons. The other two sites of around 50 acres and 52 acres have been selected for a survey. At the meeting on Tuesday, we requested the state to acquire any of the two sites for the terminal," the AAI source said.

As none of the sites are contiguous with the existing terminal - they are near the end of the runway, a new building needs to be constructed.

"We mooted a proposal that we could build a new terminal on the new site as well as run the existing one. If we can run both the facilities, the congestion will come down and flights can be assigned specific terminals during landingake-off," another AAI official said.

At the April 25 meeting, where the divisional commissioner of Jalpaiguri was present, it was decided that the state would carry out a survey on both the sites. "Once the survey is done, we will again hold a meeting, probably next week," the AAI official said.

The AAI officials said they were ready to take up the construction of the new terminal once the state acquired the land. Both the plots have tea plantations, private holdings and some patches of government land.

Asked about the meeting, Rakesh Sahay, the airport director of Bagdogra, said: "At the meeting, discussions were held on some of the sites. We hope government officials present at the meeting will take necessary steps."