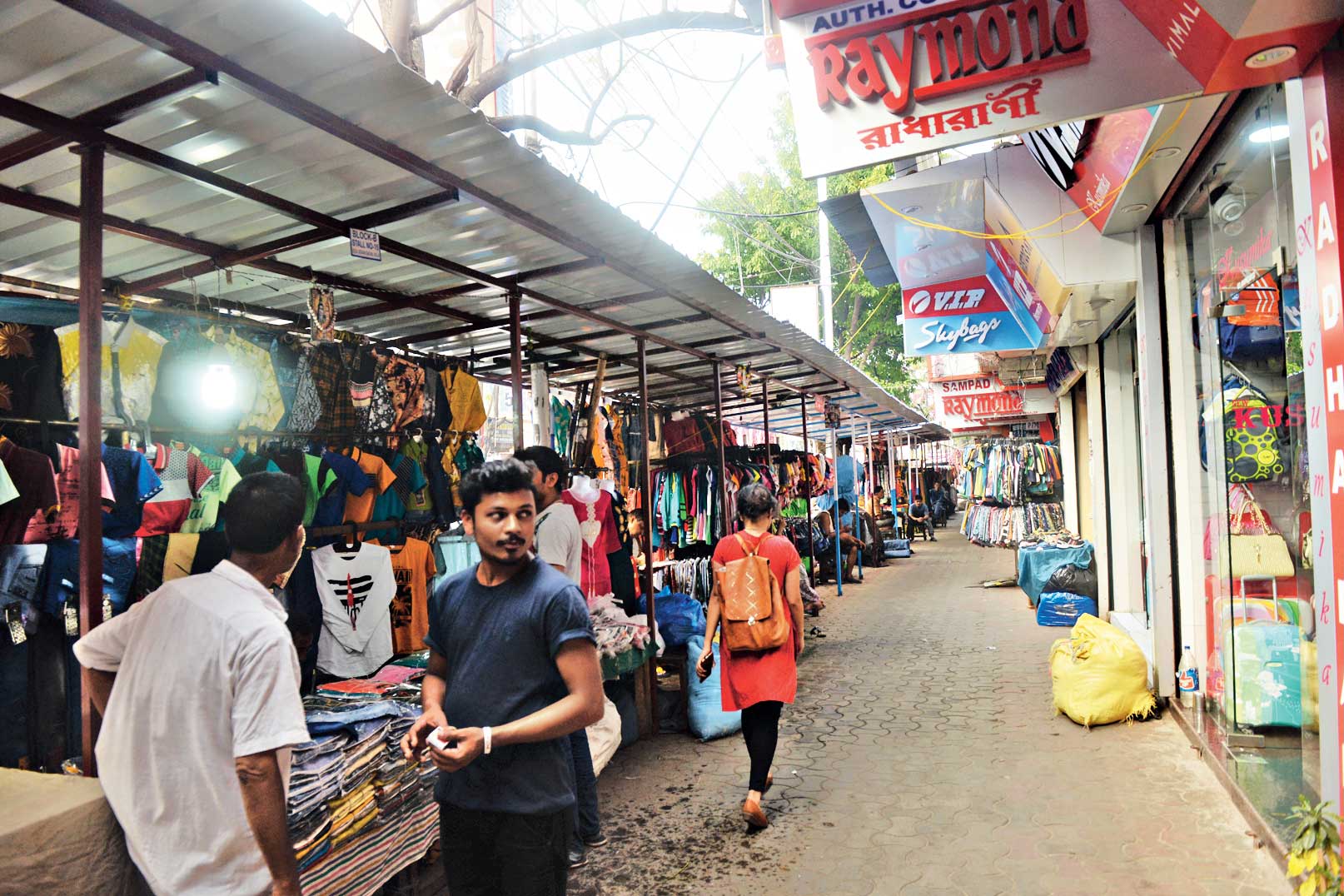 Hawkers in Hatibagan are erecting permanent structures on pavements with metal poles and corrugated sheets as sheds, in violation of rules.

The stalls are replacing the ones with a bamboo frame and plastic sheets wrapped around it.

Mayor Firhad Hakim had banned the use of plastic sheets after a Gariahat building that housed two popular sari shops — Traders Assembly and Adi Dhakeswari Bastralaya — went up in flames on the night of January 20.

A narrow passage between rows of stalls is all that is left for pedestrians on a pavement.
Picture by Bishwarup Dutta

The fire had apparently spread to the building from a roadside stall.

Metro visited Hatibagan on Sunday afternoon and came across a series of violations, of the West Bengal Urban Street Vendors (Protection of Livelihood and Regulation of Street Vending) Rules 2018 as well as rules announced by mayor Hakim.

A cluster of stalls that has come up on roads in Hatibagan.
Picture by Bishwarup Dutta

The new stalls that are coming up have iron and steel poles inserted into the footpaths. “The poles make the structures permanent because removing them would require breaking the concrete surface of the pavements,” said a man who runs a shop at the Hatibagan market.

The new stalls, like the old ones, do not have any wheels.

The 2018 rules prohibit the setting up of permanent structures on pavements.

Hakim had said after the Gariahat fire that the civic body would introduce wheeled carts that hawkers could take away at night.

Hawkers along the stretch between the Shyambazar five-point crossing and Hatibagan had started building the structures with metal poles and sheds made of corrugated sheets about 10 days back.

Around 100 stalls have already been built and according to hawker union leaders, around 1,100 more will come up on the stretch.

“We have been told not to use plastic or other inflammable materials. But we need a shed to protect our goods. The union leaders have told us to use corrugated sheets,” a hawker said.

Owners of shops along both sides of the road are annoyed with the new structures. Sampad Saha, secretary of the North Calcutta Retail Dealers Association, said they had tried in vain to prevent the hawkers from putting up permanent structures.

Biswajit Nandy, the general secretary of the hawkers union in Hatibagan, said the hawkers had been told that they would have to pull down the structures if the Calcutta Municipal Corporation provided them with wheeled carts. “These are not permanent structures. The hawkers were asked not to use any inflammable material,” said Nandy.

One of the rules announced in 2018 requires hawkers to leave at least two-thirds of a pavement free for pedestrians. Nowhere in Hatibagan has this rule been complied with.

On several stretches there is space barely for one person to pass between two rows of stalls set up along both sides of the pavements.

Almost the entire length of the footpath between Town School and the Hatibagan crossing is so crowded that even one person finds it difficult to walk comfortably. “The stretch in front of Citi Mart is about 7ft wide while hawkers occupy 5ft or more,” said one shop owner.

A couple of stalls at a crossing in Hatibagan.
Picture by Bishwarup Dutta

After the Gariahat fire, mayor Hakim had said hawkers would not be allowed within 50ft of any crossing. A meeting was held with several hawker unions at the CMC headquarters to enforce the rule but nothing has changed.

Like most crossings in the city, the rule is violated with impunity at the Hatibagan intersection, too. The north-western and south-western corners of the crossing are worse than the other two.

Nandy, the general secretary of the hawkers’ union, said those breaching the 50ft-rule were not members of the association. “We don’t control them,” he said. Sources, however, said no one could do business on the pavements without the local union’s support.

Hawking on the road

The 2018 rules also prohibit hawking on the roads. The Hatibagan crossing is a picture of violation on that count, too.

Hawkers spread out their wares at the crossing of Shyampukur Street and Bidhan Sarani. The lane opposite Sikdar Bagan Street also has tables and stands on the road with garments displayed on them.