Patient discharged but home after 28 hours 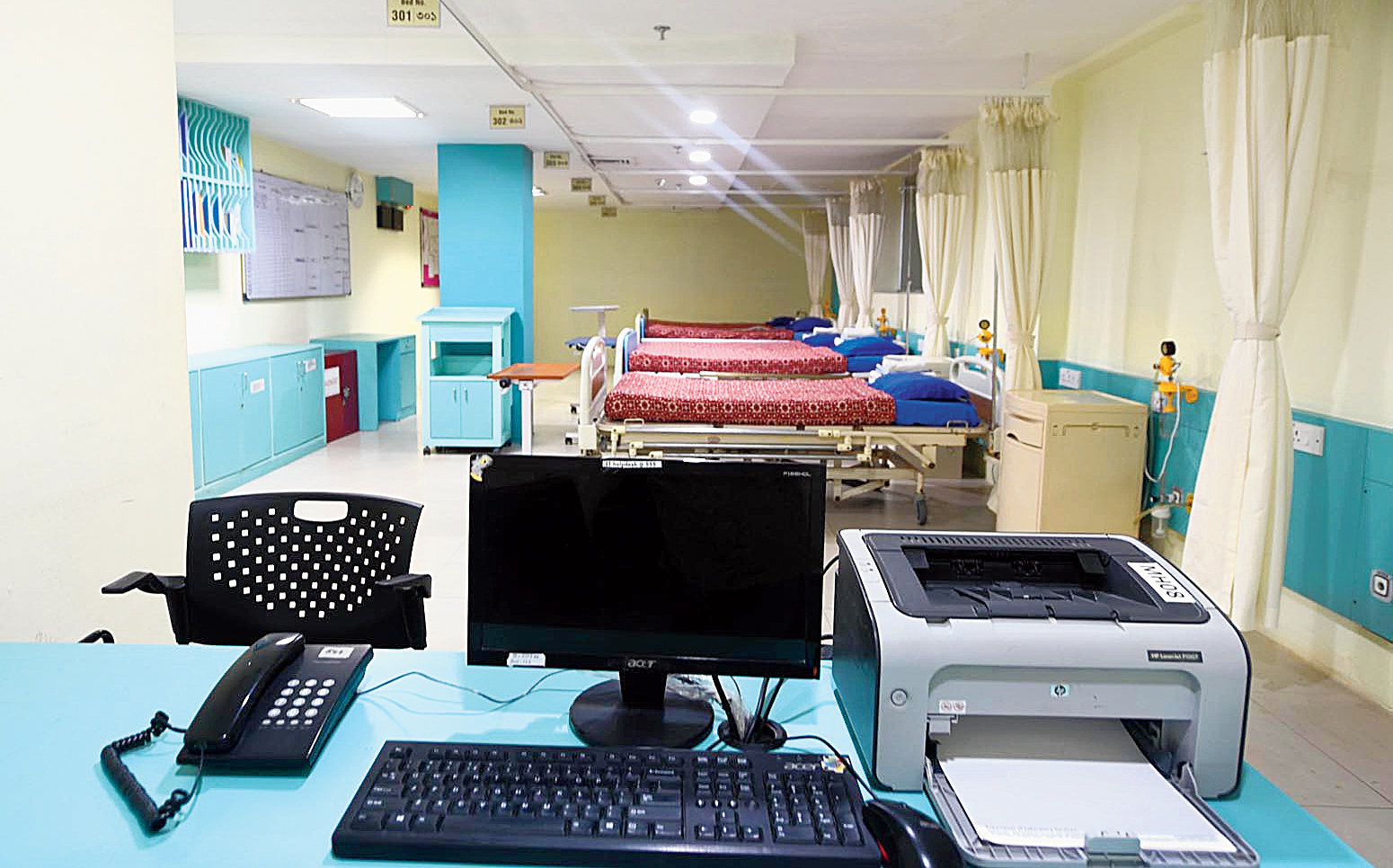 A ward created at Medica Superspecialty Hospital where patients who are to be admitted can be kept till a bed is available. Hospital officials say beds remain occupied because delay in processing insurance claims prevents patients who have been discharged from leaving the hospital.
Picture by Pradip Sanyal
Sanjay Mandal   |   Calcutta   |   Published 08.06.19, 01:12 AM

An elderly woman admitted to a private hospital went home almost 28 hours after being discharged. The patient’s family alleged that delay in processing their insurance claim led to the harassment.

The consultant under whom the 74-year old was admitted signed the discharge order around 10.30am on Thursday. She left the hospital around 2.30pm on Friday.

“We waited till the evening for the insurance claim clearance before approaching the hospital staff. Employees said the report of an ultrasound test, which was conducted that day, was not sent to the insurance agency. They said the agency’s office had closed at 6.30pm and hence, she could not go home that day,” the patient’s son-in-law told Metro.

The next morning, when the family called the office of the third party administrator (TPA), which processes claims on behalf of insurance agencies, they were told that the hospital had not sent the report.

“Several enquiries later, the TPA finally said they had received all documents needed to process the insurance claim,” the patient’s son-in-law said.

The 74-year-old’s case is not unique. Patients admitted to private hospitals have to wait for many hours before going home because of the long time TPAs take to process insurance claims.

A number of private hospitals and TPAs this newspaper spoke to said the duration had recently increased by several hours following the introduction of Swasthya Sathi, a medical insurance scheme launched by the state government for the poor. Thanks to the scheme, the number of claims has increased manifold.

The inordinate delay in discharge has prompted many private hospitals to create wards where patients who are to be admitted wait till beds are available.

Earlier, patients with medical insurance could leave for home in the afternoon after being discharged in the morning or the night before.

Families of many such patients are complaining that the wait has stretched to 24 hours or even more.

Anita Nankani was recently admitted to a private hospital in south Calcutta for an operation to remove kidney stones.

“The hospital informed me around 11am that the doctor had discharged me. Even after several hours the hospital failed to hand over documents such as the final bill and the discharge summary. My family members called the TPA and learnt that a recent photograph of mine had to be submitted to the hospital,” said Nankani, a Taltala resident.

“The agency was asking for several documents from the hospital. In the afternoon, the hospital staff offered me snacks and asked whether I would have dinner there. I said I would prefer to eat dinner at home, to which the hospital staff said it would be quite late by the time I reached home,” she said.

It was around 8pm when Nankani finally left the hospital.

Officials of insurance agencies and private hospitals said the claims under the Swasthya Sathi scheme had left the third party administrators overburdened.

“The old problems are still there. The TPAs are understaffed and hospitals do not plan the discharge properly. On top of that each TPA is having to process 30 additional claims on an average because of Swasthya Sathi. This has worsened the situation,” the CEO of a private hospital said.

Health department officials, however, denied Swasthya Sathi was responsible for the delay in the discharge of patients.

“All claims are processed online and the amount is paid by the state government,” an official said. “True, the TPAs process the claims but no paperwork is involved.”

A TPA official said: “Processing Swasthya Sathi claims may not be as time consuming as normal insurance claims but they still take time.”

An official of another TPA said they had to process around 300 Swasthya Sathi claims every day, compared with around 250 claims of other policies.

At some private hospitals, around 25 per cent of the patients being admitted with medical insurance are enrolled on the Swasthya Sathi scheme. It was barely one per cent a few years ago.

“In general, the number of patients with medical insurance has gone up. But most TPAs have not increased their human resource,” the official of a TPA said.

The CEO of a hospital said doctors usually do not sign discharge orders before noon. That leads to a late start to the process.

According to TPAs, consultant doctors are often away from the hospital when a query about a procedure or test is made.

“Manpower is a problem. The patients’ families need to be explained the entire process. When we require more documents, patients’ families should know why we need them.... Hospitals often pass on the information to relatives late,” said Jyotirmay Kundu, network manager, Heritage Health Insurance TPA Pvt Ltd.

“The delay in the discharge of TPA patients is a cause of concern. A solution needs to be worked out between the corporate hospitals, TPAs and doctors to regularise the procedure. As far as cancer patients are concerned, such delays may demoralise them as on most occasions the discharge process tends to be completed not before 6pm,” surgical oncologist Gautam Mukhopadhyay said.