The death of the last known trustee of Calcutta's first Parsi fire temple, defunct and decrepit but listed as a Grade I heritage building, has raised concern in the community about land sharks laying their hands on the property. 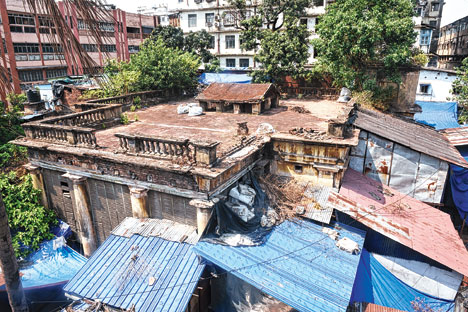 Calcutta: The death of the last known trustee of Calcutta's first Parsi fire temple, defunct and decrepit but listed as a Grade I heritage building, has raised concern in the community about land sharks laying their hands on the property.

Cursetjee Manackjee Rustomjee, who died aged 81 on April 10, was a descendant of the family that had built the Ezra Street fire temple. Nobody in the otherwise close-knit community seems to know if Cursetjee shared the trustee rights with someone before his death.

"Cursetjee used to live on the premises of the fire temple, which used to be run by a family trust. But I have no idea who the other members were and who will look after the property in his absence," said a community member who did not want to be named.

According to an almost blighted plaque outside the building, barely visible from Ezra Street because of ugly constructions all around, the Rustomjee Cowasjee Banajee fire temple was built in 1839.

Rustomjee Cowasjee is acknowledged as the first Parsi to settle in Calcutta with his family. He was a businessman who bought the erstwhile Calcutta Docking Company (now Kidderpore Docks) and also started an insurance firm, a paper mill and a cotton gin.

The temple he built has remained unused for ceremonies since 1989. Portions of the premises now house shops selling mostly lights. A part of the premises has allegedly been encroached on. One of the shopkeepers told Metro that there was an attempted break-in into the room that Cursetjee lived in on the evening of April 10, the day of his death.

Little is known of Cursetjee other than his lineage because he apparently kept to himself and didn't even attend Parsi community gatherings.

Bahadur Postwalla, one of the older members of the community, said the Parsis of Calcutta were concerned that the property would cease to exist in Cursetjee's absence. "Since it is a part of Parsi heritage, we wouldn't want it to be encroached on further. We want its restoration," he said.

Postwalla's initiation ( kushti) ceremony was held at the Ezra Street temple in 1948. "It was free of encroachment then. All this started in the 1980s," he said.

Mohammad Islam Haque, a 63-year-old man who owns a shop on the premises, had been Cursetjee's companion for nearly four decades. He would depend on Haque to run errands for him.

Haque has written to chief minister Mamata Banerjee and several senior police officers, including the joint commissioner of police (crime), about some people trying to break into Cursetjee's home.

Haque told Metro that the premises of the fire temple - the plot originally measured a bigha and 18 cottahs - had been gradually encroached on.

The temple stands in the middle of a rectangular plot, with separate structures on four sides that were used by members of the Banajee clan.

"There used to be a library to the east of the premises. It was forcibly occupied in 1989 by some men who assaulted Cursetjee and threw away all items that the library housed. We had reported the incident to police but there was no response. A company now functions out of that room," said Haque, who had taken Cursetjee to the Infectious Diseases Hospital in Beleghata when he was taken ill.

The fire temple is categorised as a Grade I structure in the Graded List of Heritage Buildings, published by the Calcutta Municipal Corporation.

The Parsis of Calcutta - only 450 of them are left - visit the fire temple on Metcalfe Street for prayers. That temple is run by a public trust.