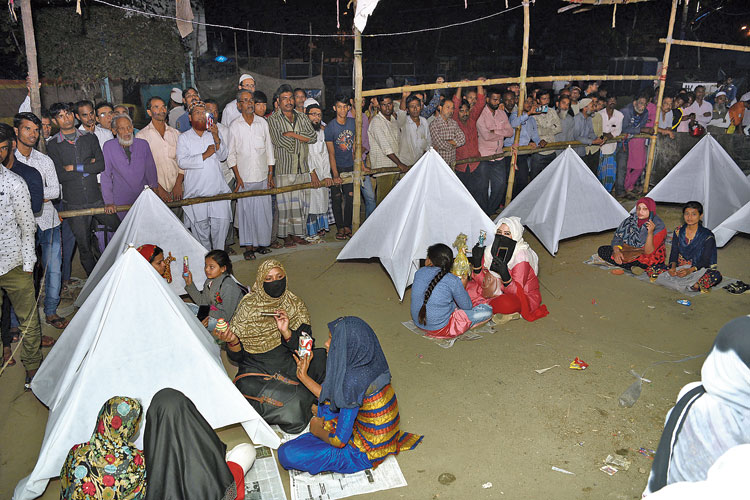 Scores of women smashed a series of detention camps in Calcutta on Wednesday evening.

The enactment was a part of a short play staged at Park Circus Maidan, the venue of a women-led vigil against the new citizenship regime that started 51 days ago.

The stage was the roofed podium at the centre of the ground. The props included mini-tents and a chair hanging from the roof with a net attached to it.

The tents were symbols of detention camps, where people left out of the proposed National Register of Citizens are feared to be sent, and the chair with the net represented the trap of authority, said those behind the performance.

The play depicted a group of people, heads wrapped in black bin bags, pinning a man to the floor and wrapping him in a white fabric. Stickers pasted all over him, he was then dragged below the chair. The stickers said PAN card, passport and Aadhaar card.

After the masked men left the stage, a group of youngsters entered, tore the stickers and unwrapped the man. The freed man then pointed at the camps and asked the audience to “free themselves”. The women sitting by the tents dismantled the structures.

“Art of resistance” is how Pinaki Acharjee, a member of the team that put up the show, described the installations and the performance. “We are just initiators, the art is taken forward by people’s participation,” said Acharjee, who collaborated with two other artists, Jagannath Chatterjee and Kanchan Guha, to create the set and the script.

Sana Firdaus, a second-year student, was in the audience, recording the performance. A regular at the Park Circus protest, Sana has been busy for the past month and a half. Apart from her studies — she is pursuing a bachelor’s in political science — Sana divides her time between Park Circus and slums in the city, where she campaigns against the citizenship matrix.

“We are explaining the perils of the citizenship exercise to the men and women in the slums and urging them to join us in the protests,” she said.

Just before the play started, a mother and her daughter came to the ground. The daughter wrote the final paper of Madhyamik and came straight from the exam centre. When a volunteer arrived, the teenager gave him a few packets of biscuits.

“She was getting restless for coming here but the exams were on. I suggested we go home and come back in the evening but she would have none today,” said her mother, who works with the district consumer forum and has been to Park Circus Maidan before.

Devdan Chaudhuri, columnist and author, had come with friends Shahana Chatterjee and Sohini Gupta. “The question is not why we are here. People sitting in their homes should question themselves why are they not here. If not now, then when,” asked Sohini, who works with an NGO.

Chaudhuri, vocal on social media against the Narendra Modi regime, keeps getting “go to Pakistan” messages on Facebook. He got one on Wednesday as well. “A riot is between two equal groups. What is happening in Delhi is state-sanctioned pogrom,” he said.