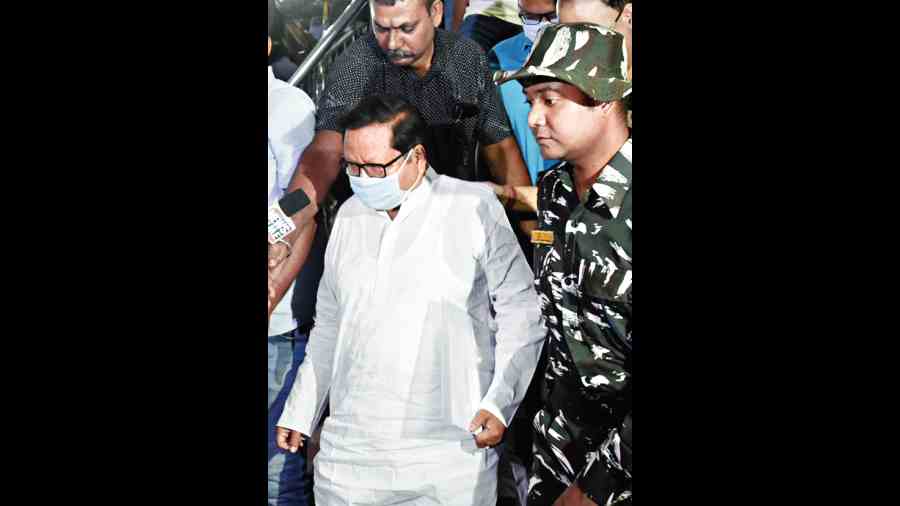 Paresh Adhikary leaves the CBI office on Friday, where he was questioned for almost 10 hours.
Bishwarup Dutta
Tapas Ghosh And Monalisa Chaudhuri   |   Calcutta   |   Published 21.05.22, 03:13 AM

Calcutta High Court on Friday ordered the Cooch Behar district inspector of schools to sack Ankita Adhikary, daughter of minister Paresh Chandra Adhikary, as assistant teacher at a government school where she was appointed through the School Service Commission two years ago.

Adhikary, minister of state for school education, and Ankita are subjects of a CBI probe into hundreds of allegedly illegal recruitments made to government-aided schools on the SSC’s recommendations.

Justice Abhijit Gangopadhyay ordered Ankita to return the amount she had received as salary since the day of her appointment and deposit the money in two instalments with the high court registrar-general.

The first instalment has to be deposited by June 7.

“This court is directing DI Cooch Behar to terminate Ankita Adhikary and ensure that she be not allowed to enter the school where she taught all these years,” Justice Gangopadhyay said.

He observed that Ankita should never be able to identify herself as a “teacher” for the rest of her life as she had “committed cheating in a noble profession like teaching”.

The profession that produces doctors and engineers has been “cheated”, Justice Gangopadhyay observed in court.

Ankita has been charged with cheating, criminal conspiracy and corruption in an FIR lodged by the CBI on Thursday in connection with her recruitment through the SSC. She had been appointed an assistant teacher for Classes XI and XII at the Indira Girls High School in Mekhligunj, Cooch Behar.

CBI officers have said Ankita’s name was inserted illegally into the waiting list for would-be assistant teachers in political science for Classes XI and XII, superseding others with higher marks.

Babita, who was present in the high court on Friday, said she was happy at the court’s order to sack Ankita and now expected to be appointed in Ankita’s place.

“The order has been passed. But to implement it in its truest sense, I should be given an appointment which I deserve,” she said.