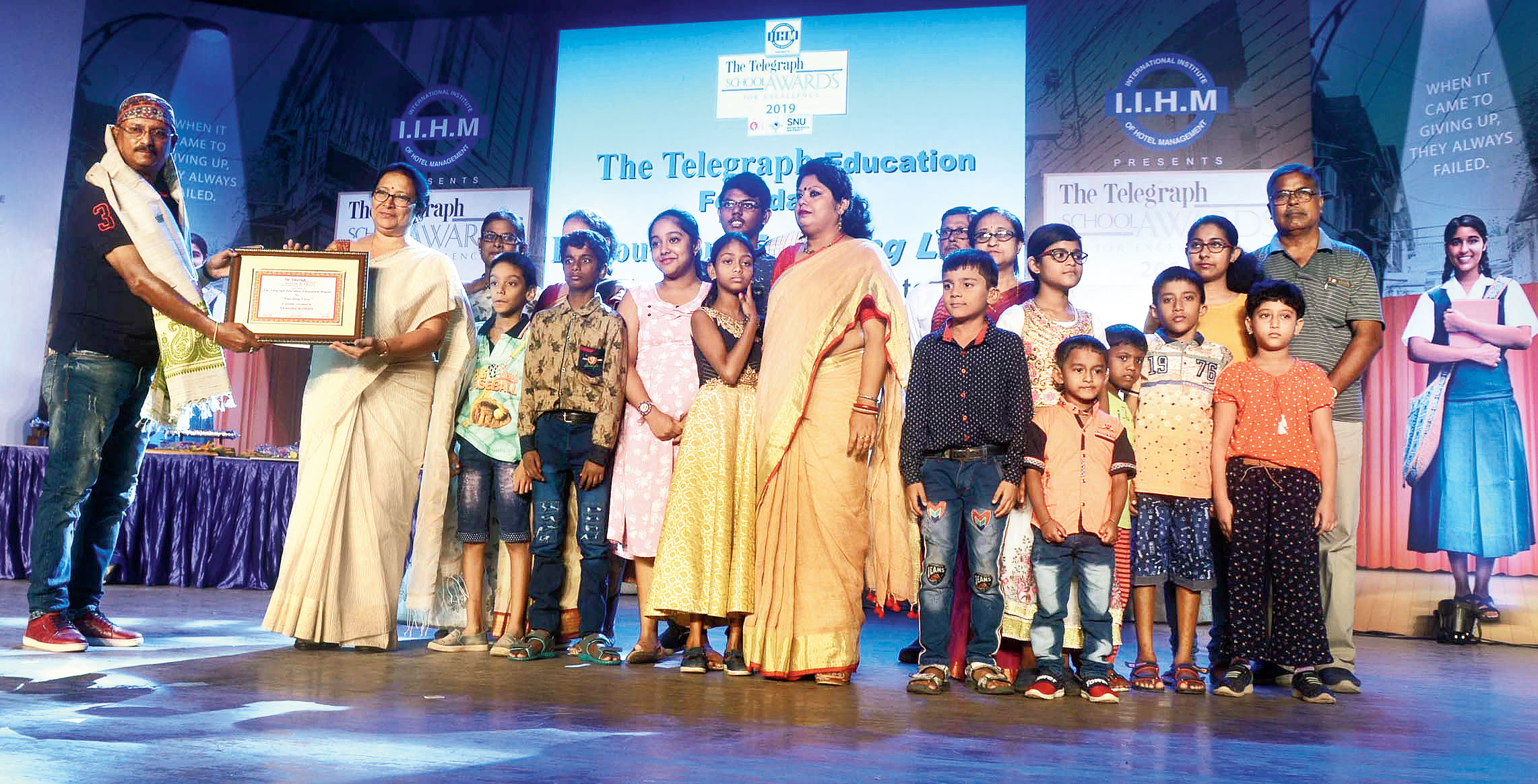 Partha Kar Chowdhury, a pool car driver who collects unsold food from restaurants and distributes them to patients of three government hospitals, hands over The Education Foundation Honour for ‘Touching Lives’ to teachers and students of Anwesha Kolkata at The Telegraph School Awards for Excellence.
Picture by Bishwarup Dutta
Jhinuk Mazumdar   |   Calcutta   |   Published 14.09.19, 08:13 PM

Homemaker Pompi Sarkar travels with her nine-year-old son Prantik from Budge Budge for two hours to reach a nondescript house in a bylane in Jadavpur, where the two attend classes for the next five hours.

Prantik is hearing impaired since birth and the classes are meant not only for him but also his mother, something that the founders of the school believe is “crucial” for the child to learn in a best way possible.

Anwesha Kolkata has been formed by parents of children with hearing impairment. They got together to form a group because they “found strength in each other’s company” and thought of reaching out and provide support to other parents and children.

“Since we were together, we were better off dealing with the challenges that came our way. We were facing the problems ourselves and also finding our own solutions. But sharing our situation with parents of kids who have similar problem gives us more strength,” said Snigdha Sarkar, one of the founder members. 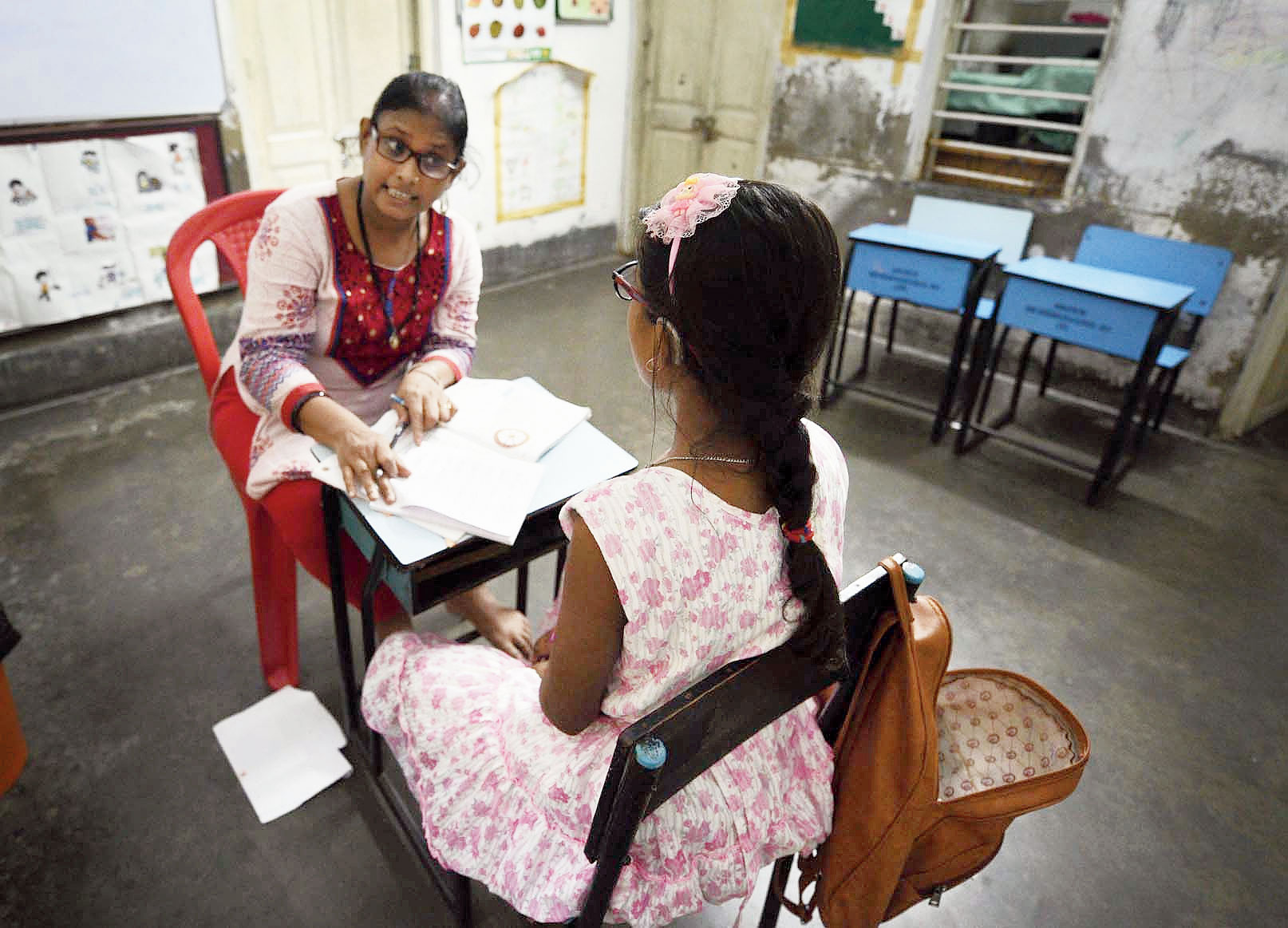 A teacher during a one-on-one interaction with a student.
Picture by Gautam Bose

On September 7, Anwesha was the joint winners of The Telegraph Education Foundation Honour for ‘Touching Lives’ at The Telegraph School Awards for Excellence 2019 presented by IIHM and powered by Sister Nivedita University. The organisation also won a letter of financial assistance.

“When our efforts are recognised, it encourages us and makes us more determined. The awards ceremony recognised not just us but a cross-section of people,” said Sarkar.

Anwesha started in May 2006 and though initially the parents were busy with the growing up of their children, it gradually started getting in more students who needed help and they reached out to them.

Anwesha, an association of parents as they describe themselves, primarily cater to children in the age group of zero to three years for early intervention, three to six years for pre-primary and a resource centre for children aged between six and 14 years. The self-advocacy group primarily consists of children of parents who started Anwesha so that they can speak out for their rights.

“The early years are very crucial because we have to use that time to develop the language skills of a child through sounds and we can maximise their language skills,” said Anindita Chakraborty, a core member. 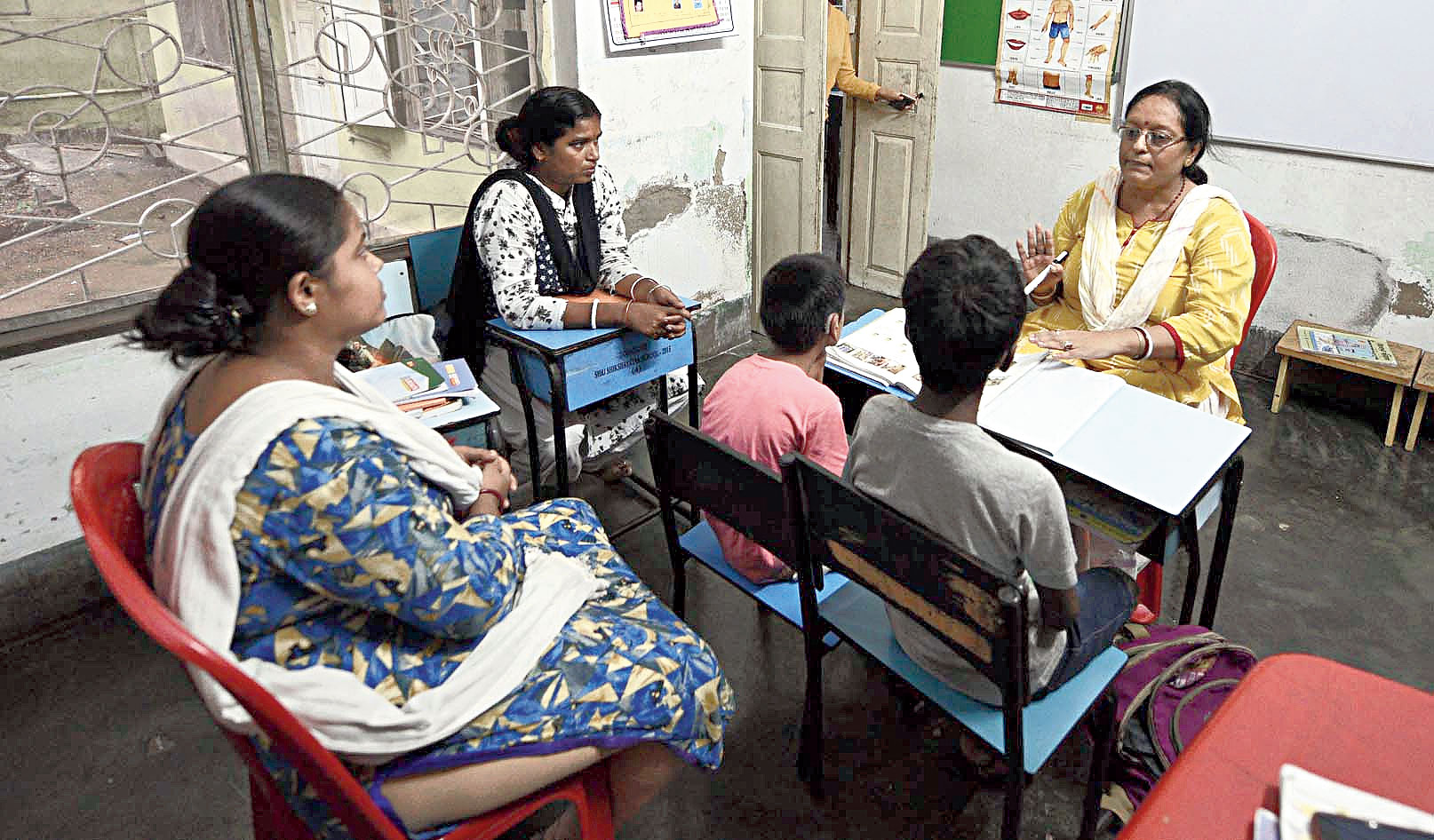 Parents attend a class along with their children at Anwesha’s centre in Jadavpur.
Picture by Gautam Bose

The outreach and commitment is so strong that resource persons from Jadavpur travel to Barasat so that they can help a six-month-old child because the mother of twins cannot come so far and the association did not want to lose out on the initial years.

“Our children have struggled much more because their hearing impairment was not detected at an early age. Usually most children who have hearing loss have a residual hearing and our job is to amplify the hearing with the help of hearing aids and develop a practice in them to listen. The earlier it can be done in the family or institutionally the more it will help the child to develop the language. But often the detection is delayed,” said Sarkar.

The classes at Anwesha are not conducted in a group for all children but on a one-on-one basis or one teacher would cater to a maximum of two children.

So strong is the support that students who have been at Anwesha for the pre-primary years and have joined a mainstream school come back for the extra classes that helps them to cope with the studies there.

But the training does not begin and end with the children. The association trains mothers, which includes counselling them so that they are able to accept the child better in homes where there have been no member with hearing impairment.

A major portion of the training of the mother is from experience because they themselves have gone through similar issues and challenges.

“The first thing that we have to teach parents is to accept the child because if the parents cannot do that the child will never be able to accept oneself,” said Sarkar.

The mothers also attend the classes for some time because the child spends more time with her than the teachers and she has to be prepared to help the child.

The challenge of bringing up children with special needs is also about tackling isolation that they are subjected to in mainstream schools and often having to cope and fight against the belief that “their kids wont be able to do it”.

“We want our children to grow up like any other child but simultaneously we know that they require some special support. The society is inclusive, they will not get a special society after they come out of a special school so we need to prepare the children for it,” said Sarkar.