Kaajee Singh, 79, a renowned folk artist from Kalimpong, was selected for Padma Shri 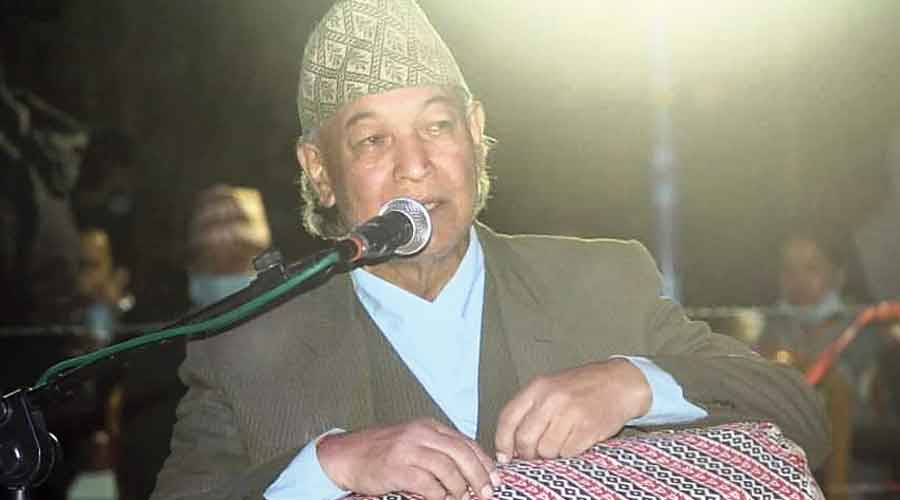 Gorkhas across India feel the community received due recognition at the national stage on the occasion of Republic Day but questions are also raised on whether the Centre sincerely wants to fulfil their main demands of separate Gorkhaland state and conferment of Scheduled Tribe status on 11 hill castes.

Kaajee Singh, 79, a renowned folk artist from Kalimpong, was selected for Padma Shri. Singh has dedicated his life to documenting shree maadal, an important instrument used in Gorkha/Nepali folk music, and spreading awareness of it.

Singh has researched for 54 years the “notional system” of the maadal and the traditional folk song “Maadaleygeet.”

A day after Singh’s name was announced for the prestigious award, the Massed Pipes and Drums Band, which comprised musicians from eight army regiments, played the song “Herana Hera Kanchha” during the Republic Day parade in Delhi.

The song was sung by famous Darjeeling singers Aruna Lama and Jitendra Bardewa. The Republic Day contingent was led by Subedar Major Umesh Apale.
On Republic Day, Milan Mothey, assistant sub-inspector of Darjeeling police, and another Gorkha Shyam Kumar Thapa, a lance naik with Eastern Frontier, were among the 16 police personnel from Bengal to be selected for Police Medal for meritorious service.

Singh said the Padma Shri was not just for him but the community. “The award has piled up more pressure on me to carry on with contributions to our music,” he added.
Soon after the announcement of the award for Singh, Darjeeling BJP MP Raju Bista publicised a letter he had written to the Centre in 2021 recommending his name for the honour. In the hills, where community-centric sentiments run high, a section also asked whether the Centre would also address the community’s core issues.

“As a Gorkha, the recent developments surrounding the Republic Day are truly welcome. Kaajee Singh deserved the recognition for his selfless dedication to the Gorkha folk music,” said a leader of the Bharatiya Gorkha Prajatrantik Morcha. “We, however, hope the Centre does not forget our core demands of Gorkhland and tribal status for 11 communities.”

Bhutia, 65, is an acknowledged master of thangka, which is a Tibetan Buddhist painting. He learned the art at the age of 15 under the tutelage of Jigme Wangchuk Lama, Phuntsok Sangpo and Zapa Acho.

Hailing from Sakyong in West Sikkim, Bhutia currently resides in Namchi, South Sikkim, and is the proprietor of Kanchendzonga Handicrafts Centre. He had his formal education at Government Senior Secondary School, Pelling, and Namchi Senior Secondary School. After his formal education, he started monastic life at Pemayangtse Monastery in Pelling, West Sikkim.

“I started learning my art from the age of 15. Over the years, I have done numerous paintings and trained over 400 students. I received many offers to work overseas, but have chosen to work and live in Sikkim. I am overjoyed to receive the Padma Shri honour, thanks to blessings of our God,” said Bhutia.

Some of Bhutia’s notable works are the Buddhist murals at Pemayangtse Monastery, Boomtar Tamang Gumpa in Namchi, old and new Gnadak monasteries in Namchi, Allay Gumpa at Ravangla, and Tashi Choeling Monastery at Khechupalri.