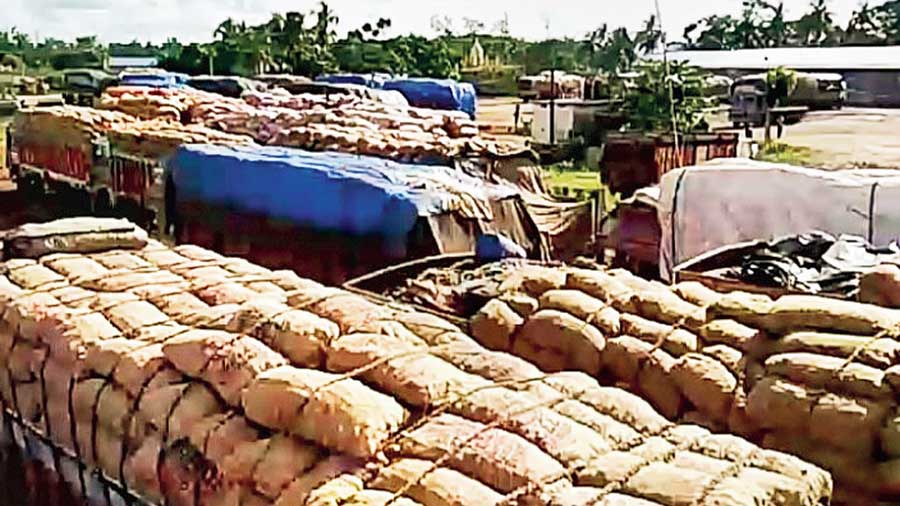 The Centre’s sudden decision to prohibit export of onion has slammed the brakes on hundreds of onion-loaded trucks and rakes waiting along India-Bangladesh border in the state and put the exporters in a quandary as they apprehend huge losses because of the embargo.

Estimates from exporters suggest trucks loaded with about 3,000 tonnes of onions had already secured the shipping bills — clearance from the customs to cross over — and are waiting at the land ports, but cannot enter Bangladesh because of the ban.

On Monday evening, the Directorate General of Foreign Trade, a wing of the commerce and industry ministry in India, issued the export ban order to control domestic prices.

The onion order coincided with the arrival of the first consignment of hilsa fish from Bangladesh. “The ban on the export of onions came immediately after Bangladesh lifted the embargo on hilsa export and agreed to send 1450 tonnes of the fish to India. It  is really embarrassing,” said Petrapole Clearing Agents’ Staff Welfare Association secretary Kartick Chakraborty.

On Tuesday evening, a section of Bangladeshi media outlets suggested that onion exports might be allowed at a higher price. They reported that India had doubled the export price of onion, which would mean importers in Bangladesh would have to amend the earlier letter of credit to get the consignments.

Bangladesh is the biggest importer of onions from India.

If the trucks waiting outside the land ports and the rakes are taken into account, another 7,000 tonnes of onions are ready for export.

“It will be a disaster for us unless the Centre at least allows the consignments waiting at the port,” said Mihir Ghosh, an exporter at the Ghojadanga land port in North 24-Parganas, where around 300 trucks loaded with onions worth over Rs 30 crore are stranded since Monday afternoon.

In the nearby Petrapole land border, around 100 trucks were stranded, whereas in Malda’s Mahadipur, the count was 70 inside the port and 80 outside.

On Tuesday, the Centre sought information from the Customs authorities about the quantity of onions lying at different ports after issuance of shipping bills.

“As the directorate asked the Customs authorities to submit the information by 5pm on Tuesday, there was some hope that approval would be given to export ready consignment of onions.… But we haven’t heard anything till late in the evening,” said a clearing agent.

Ghosh said: “If the onions are damaged because of indefinite wait, we wo­uld be comp­elled to sell them at throwaw­ay prices... Most of us will suffer huge losses as we take bank loans for our business.”