One held with deer horns 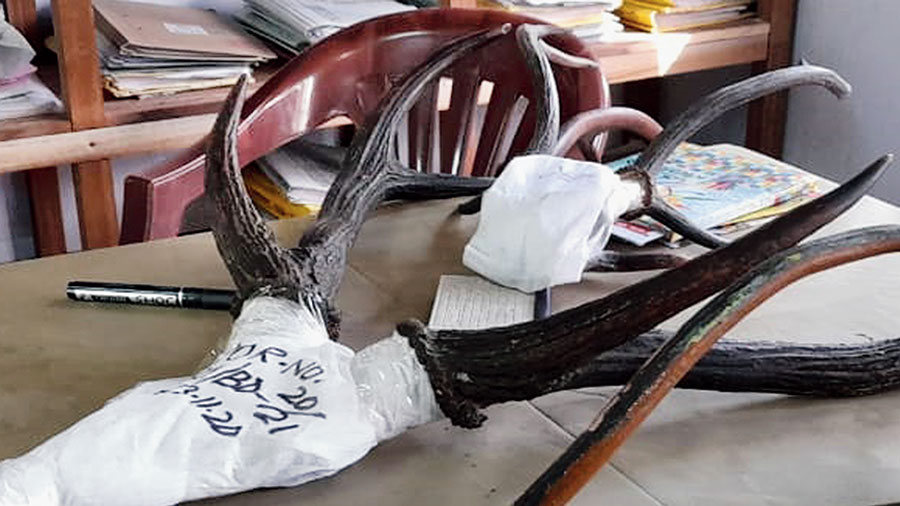 The Sashastra Seema Bal (SSB) in association with the Wildlife Crime Control Bureau (WCCB) have seized a pair of horns and skull of a sambar (a species of deer) from Bagdogra on the outskirts of Siliguri on Friday.

A resident of a nearby tea estate has been arrested in this connection.

“We had information that a person, who is from a nearby tea estate, has a deer’s horn and that he is looking for a buyer for it. He was roaming around in Bagdogra forest area. We conducted a joint raid with the SSB and apprehended him with the horn,” said a WCCB officer.

Later, WCCB officials handed over Sabar and the horn to foresters of Bagdogra forest range that functions under the Kurseong forest division.

Charges under Wildlife (Protection) Act would be brought against Sabar.

Amal Roy, 35, a resident of Maynaguri, died when a truck carrying boulders along NH27, flipped sideways and fell on a roadside tea stall near the local BDO office on Friday morning.

Local residents blocked the road alleging absence of policemen to control traffic in the area.

The roadblock was lifted when police promised all necessary help. Excavators were engaged to remove the truck.

The victim, found under the truck, was pronounced dead after being taken to the local rural hospital.