Once bitten, twice shy: BJP keeps out turncoats from its candidate list

During the Assembly election, the saffron party had fielded over 140 turncoats for the 294-seat House 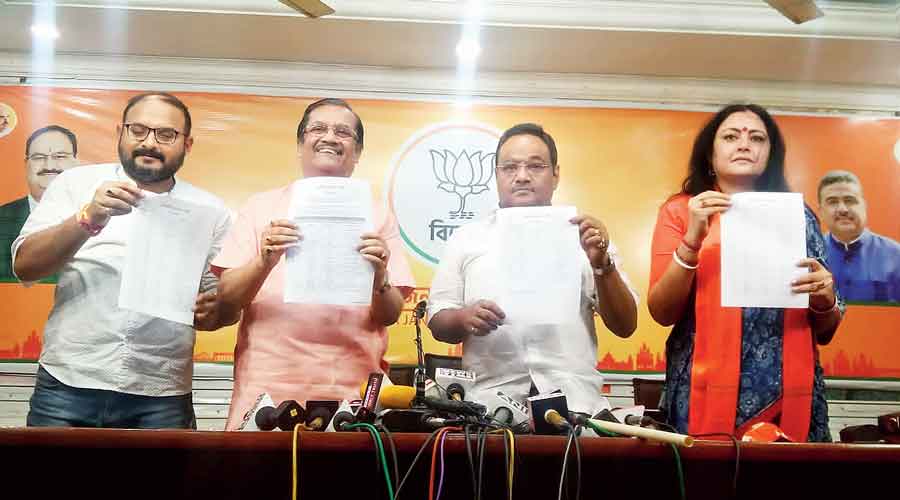 Bengal BJP was finally able on Monday to announce its list of 144 candidates for the Calcutta civic polls, and the names suggested the party’s attempts at course correction following the harsh lessons of the Assembly polls.

The BJP this time reposed faith mostly in old-timers and loyalists, instead of on turncoats from other parties.

The conspicuous absence of turncoats from the nominee list marked a major shift from its strategy followed till the Assembly election, in which the BJP had fielded over 140 turncoats for the 294-seat House. The move had not only infuriated numerous sections within the party but also had largely been rejected by the electorate. Most turncoats were trounced in the elections.

Sources in the BJP said it was a conscious decision to exclude turncoats and prevent further dissent in the already fragile party organisation.

“We have been able to field our workers from the grassroots as candidates (for Calcutta civic polls),” state vice-president and in-charge of the Calcutta civic poll management committee Pratap Banerjee said at a news meet before announcing the names. “There is no such case,” he said when asked about turncoats

“I’m happy with this list. Even if we don’t win, we will give a good fight, because deserving candidates have been fielded,” said a youth wing leader who had criticised the party’s decision to distribute tickets among turncoats in the Assembly polls.

The “good fight”, however, may remain a pipe dream for the party that got zero Assembly seats from Calcutta and its neighbourhood this summer, and was able to secure barely 29 per cent of votes in the area under CMC, compared to Trinamul’s 60-odd per cent.

Trinamul is going into the polls with leads in 134 of the 144 wards. The BJP has leads in nine wards.

Another reason why the party gave turncoats a pass is their tendency to rush back to Trinamul.  A senior state unit functionary of the BJP said at least two Trinamul leaders, including the son of a former MLA, got in touch with them for tickets after being denied by Mamata this time but “were not entertained”.

Out of the 144 BJP candidates, 48 are below 40 years of age and more than 50 are women. Nine of the BJP’s candidates belong to a minority community.

Kamini Tiwari, wife of gangster Gopal Tiwari, has been fielded as BJP candidate for ward 24. Her husband, then purportedly owing allegiance to Trinamul,was arrested in 2015 for shooting at a cop on the day of the Calcutta civic polls, and acquitted four years later.

The BJP retained three of its winning candidates. Seven BJP candidates won the civic polls in 2015. Two defected to Trinamul and one died in a road accident. Another winning candidate had to be replaced since the ward is now reserved for women.

BJP state headquarters 6 Muralidhar Sen Lane saw at least three protests from thwarted aspirants on Monday, but muted compared to protests after the list was out for last Calcutta civic polls in 2015.