The study, conducted throughout Bengal in September this year, found that the total number of children suffering from malnutrition stood at 6.70 lakh 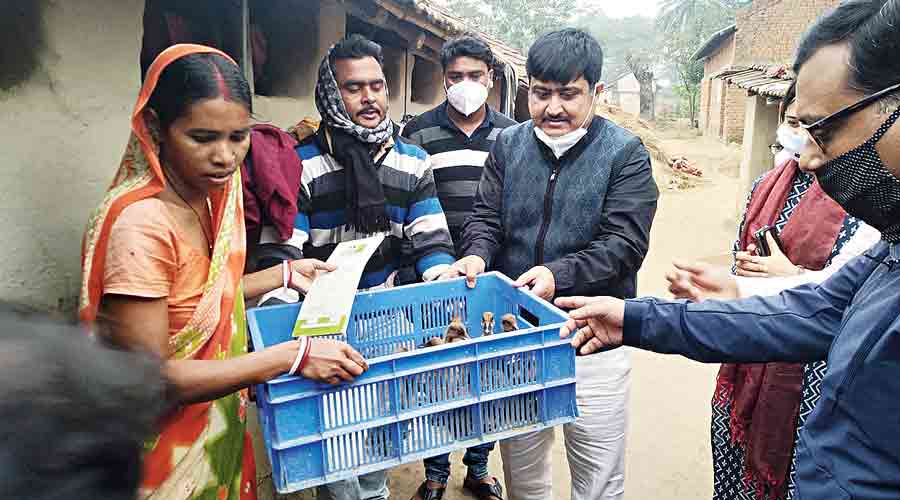 Purulia DM Rahul Majumdar hands over a duckling to the mother of a malnourished child in Bhalkuri on Saturday.
Telegraph photo.
Snehamoy Chakraborty   |   Published 06.12.21, 12:50 AM

A recent survey by the women and child development department has revealed that the number of children suffering from malnutrition has increased twofold during the closure of ICDS (Integrated Child Development Scheme) centres following Covid-19, prompting the Bengal government to take urgent measures to ensure food supply to the doorsteps of mothers.

The survey, conducted throughout Bengal in September this year, found that the total number of children suffering from malnutrition stood at 6.70 lakh. The figure was 3.5 lakh in August 2020.

“In February 2020, just before the pandemic broke out in our state, the number of severely malnourished children was 14,934 and there were 26.68 lakh children in the moderate category,” added a senior official in the ICDS department.

“It was expected that the number of children with malnutrition will increase during the pandemic as all ICDS centers were closed. Hence, as soon as we went through the data (of the survey), we immediately started special measures like supplying ready-to-eat food on doorsteps…  we are expecting  good results soon,” said Sashi Panja, the women and child development and social welfare minister.

There are 1,17,120 ICDS centers in Bengal and a total of 73.45 lakh children between 0-6 years of age are covered through those centres. The ICDS centres also take care of the nutrition of pregnant women and lactating mothers.

Sources said the children who are suffering from malnutrition are mainly from poor families living in remote sites.
During the lockdown, many among their parents  lost their jobs. To add to their woes, the ICDS centres were shut down at the same time. The government had made provisions for dry ration for such families but those were not distributed properly, an official explained.

Purulia district administration on Saturday started an outreach drive for the families of 2,658 severely malnourished children with 10 ducklings, few fruit saplings and the proposal to dig a small tank in their land where they could breed fish high in protein.

“We have named the drive Utthan (emergence). Families of severely malnourished children can generate a source of protein on their own. The ducks will provide eggs and the tank will provide fish. Fruit trees like papaya and guava will help them get nutrition,” said Rahul Majumdar, Purulia district magistrate.

In Bankura, the district administration has launched Operation Pushti (nutrition) in which they are providing an egg and a nutritious drink on the spot to  malnourished children.