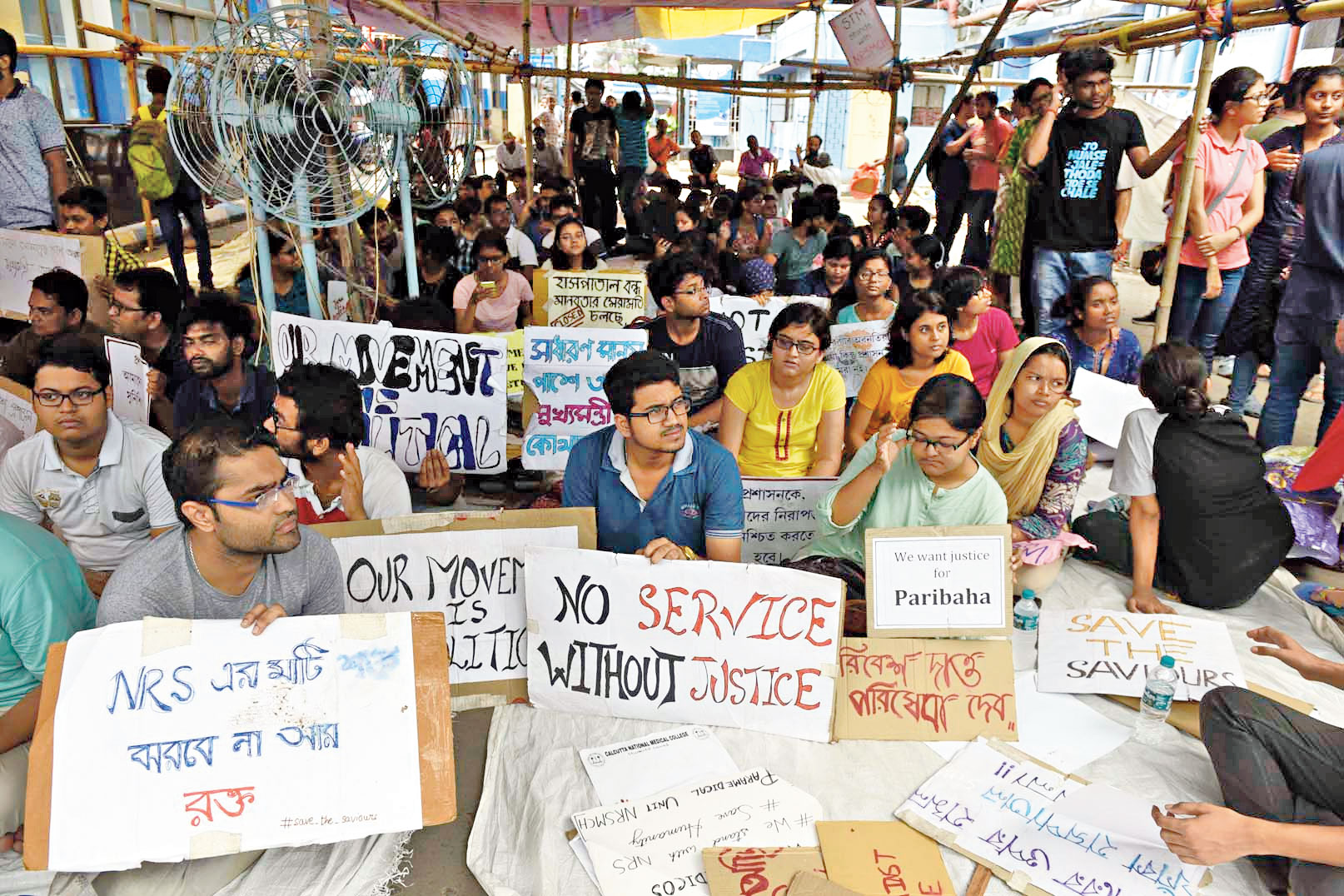 Calcutta police have decided to carry out security audit of all government hospitals, including the five medical colleges in the city.

The SOP will include monitoring entry and exit of patients’ relatives, fixing single point contact person for emergency and posting a senior officer of the rank of assistant commissioner of police in each of the medical colleges.

The state home department had asked Lalbazar to draw up an action plan following a meeting on June 12 at Swasthya Bhavan where representatives of health and family welfare department, senior administrative officials of the city government hospitals and some junior doctors were present.

Based on the recommendations that emerged from the meeting, the directive was issued to the police through state home department on June 13.

At present, around 1,000 police personnel are posted in government hospitals in the city. The number has almost tripled temporarily with deployment of contractual guards and home guards after the NRS fiasco.

Sources in the health department said that assistant commissioners of police would be posted at each of the five medical colleges across Calcutta from next week. A formal notice would be issued within a day or two.

“We now have police officers in the rank of inspector-in-charge at the hospital police outposts. From next week, there would assistant commissioners above them,” said a senior official of the health department.

Sources in the police said that in all likelihood, these officers would be formally asked to be in charge of these medical colleges. The assistant commissioners would have a dedicated team of police under him and would liaison with superintendents of the hospitals everyday.

“In case of any violence, the assistant commissioner would report to the divisional commissioner of police before drawing up an action plan,” said an officer at Lalbazar.

By next week, all divisional deputy commissioners have been instructed to carry out the security audit of hospitals in their jurisdiction and submit reports. “The existing security parameters would be reassessed and changes will be executed based on the recommendations,” a senior police officer said.

The police, along with hospital officials, have been asked to device a full-proof mechanism to control entry and exit of relatives of patients who have been admitted and ensure that the restriction on the number of people who visit a patient is monitored regularly.

An officer who is posted in an outpost in a central Calcutta hospital, said sometimes it became difficult to manually control and stop relatives of the patients from entering the ward in non-visiting hours.

According to the directives sent to the police, the cops will hold sensitisation sessions for doctors and security personnel.

A similar project has already been implemented at the Calcutta National Medical College and Hospital.

Focus on identifying areas that need to be covered under CCTVs, deploying a single-point contact person who could be contacted as the nodal officer in case of a security threat and installing alarm system for regular mock drills are some of the recommendations for the police to execute.

As of now, police usually wait for instructions from the hospital officials before reacting to a law-and-order situation. However, according to the new directives, police have been asked to act immediately.

“This model is also in practice on CNMC. As the locality is very sensitive and there are apprehensions of violence, the cops posted at the outpost react immediately even before any official order arrives,” an officer in Lalbazar said.

The directive also mentions: “Health and family welfare department would conduct a detailed assessment of need to increase number of outsource security personnel in every medical college and hospital and sanction the same”.

At present the government has sanctioned posts for 344 contractual guards out of which 336 guards are on duty.

According to sources in Lalbazar, on an average each hospital outpost has a strength of over 20 constables, SSKM being the highest with 50 odd constables.

Each outpost functions under an inspector like a separate police station.