Beeline at offices and schools for citizenship documents 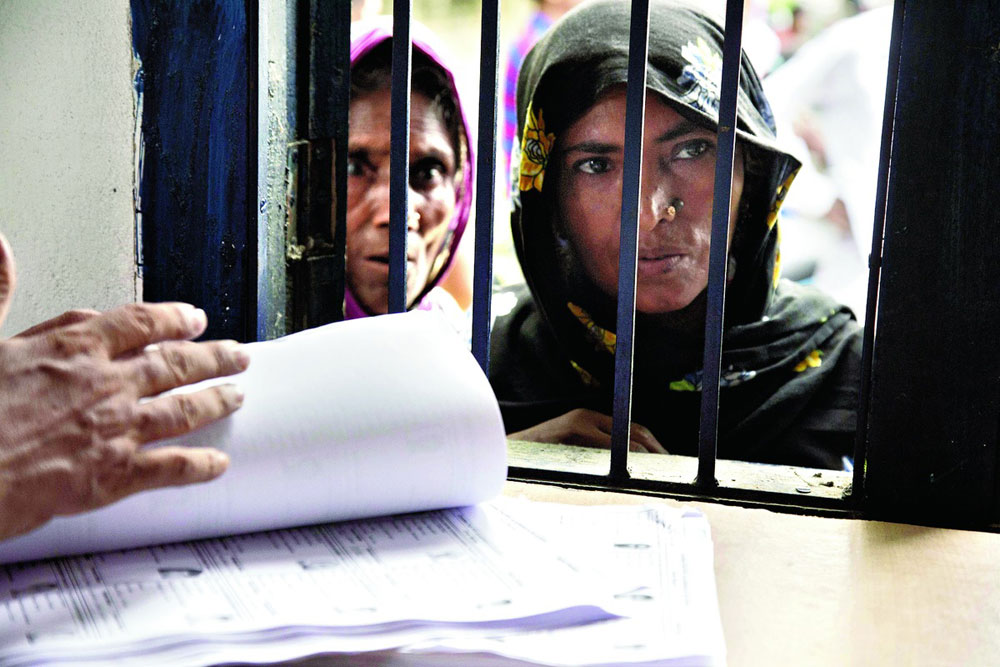 People have started making rounds of government offices, schools and banks to arm themselves with documents that can help them prove they are legitimate Indian citizens and their families have been staying in India from before March 26, 1971. That is the NRC cut-off date.
Image credit: AP
Anirban Choudhury   |   Alipurduar   |   Published 16.09.19, 07:18 PM

If Assam sneezes over NRC, Bengal’s Alipurduar catches a cold.

The scare of exclusion from the population register has travelled from neighbouring Assam to parts of Alipurduar in north Bengal.

People have started making rounds of government offices, schools and banks to arm themselves with documents that can help them prove they are legitimate Indian citizens and their families have been staying in India from before March 26, 1971. That is the NRC cut-off date.

Those frantically in search of documents are a motley lot — traders, retired government employees, youths and homemakers. Many of them, sources said, are those with family members and relatives in Assam whose names are not there in the final NRC published on August 31.

Swadesh Sarkar, a stationery shop owner, told this correspondent that he has started the search to prove his Indian ancestry.

“A number of customers who visit my shop have alerted me and asked me to collect documents prior to 1971. My family used to stay in Baneswar (Cooch Behar) earlier and we shifted here around 20 years back. I have identity proof or documents dating back to the pre-1971 period. I am trying to collect old land records to stay safe,” Sarkar said.

Every day, some of these people are visiting Dooars Kanya, the district collectorate, while others are going to the schools where they had studied.

“People are coming to us enquiring about the documents they would require to prove their citizenship. We are telling them we do not have any guidelines with us. Despite that, more and more people are coming with enquiries every day,” said an official posted at the collectorate.

According to the official, most of those visiting his office are people from humble backgrounds who seem scared that their names would be excluded from NRC if it is carried out in Bengal.

Although chief minister Mamata Banerjee has repeatedly said such a register of citizens would never be drawn up in Bengal, repeated assertions by BJP leaders about an NRC in Bengal seem to be the trigger behind the rush to get documents.

The headmaster of an old high school shared his experience of how his former students are making a beeline. “Former students and even their sons and daughters are approaching us for fresh school leaving certificates. We are asking them not to worry but they are insisting we check the records and provide it to them. There seems to be fear in the air,” said the teacher.

The underlying tension is so deep that some families have held “emergency meetings” to figure out how to get old documents to establish citizenship.

“I asked my father whether he has any documents dated before 1971. He told me that we had old land documents but they were swept away in floods that had drowned Alipurduar in 1993. I don’t know what to do now. I am consulting relatives from the extended family for alternatives,” said Tapan Debnath, who works in a private firm.

The fear in the area — where the BJP swept the Lok Sabha polls — is music to the ears of Trinamul leaders but they are trying to hide the feeling and instead promising all help.

Mridul Goswami, the district Trinamul chief, admitted that people were feeling scared and pointed out that hundreds from the border areas of Assam visit Alipurduar each day.

“Interactions with them have left many people worried, particularly after they heard about the probable consequences of those who could not make it to NRC in Assam. In fact, people here are more focused on NRC than on upcoming Puja. We have made it clear there will be no NRC in Bengal. Still, some people, driven by fears, are trying to gather old documents,” said Goswami.