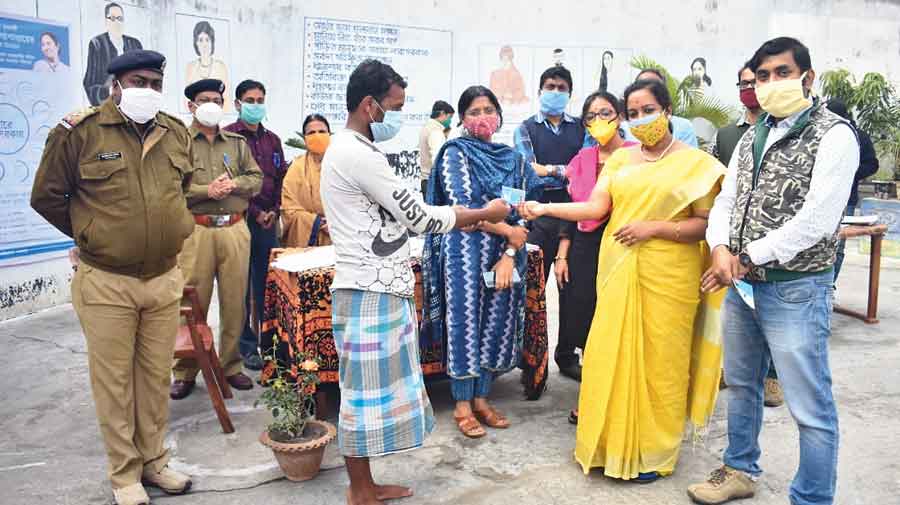 A prisoner receives a Swasthya Sathi card at a Duare Sarkar camp at the Rampurhat jail on Tuesday
Telegraph Picture
Snehamoy Chakraborty   |   Suri   |   Published 09.12.20, 05:07 AM

The Bengal government has asked all district magistrates to organise Duare Sarkar camps at correctional homes in the state with thrust on enrolling prisoners in the health insurance scheme of Swasthya Sathi.

“As the government has planned to reach out to all, we thought the inmates of correctional homes should not be deprived of welfare schemes. We think that apart from other projects, the all-inclusive Swasthya Sathi scheme will help our inmates get better treatment at private hospitals, too,” said Ujjwal Biswas, the state correctional administration minister.

Sources said there were around 20,000 undertrials and 5,000 convicts at 60 correctional homes across Bengal and most of them were not covered by any form of health insurance scheme. Secretary of correctional administration Neelam Meena on Monday evening sent an email to all district magistrates asking for the arrangement of Duare Sarkar camps at jails immediately.

Senior officials in the correctional administration are reportedly working on including all inmates in the state’s health insurance scheme despite facing a funds crunch. Prisoners are currently treated at health centres inside jails or government hospitals if the illness turns critical.

“We have had to face situations where we admit many inmates to private hospitals to provide them with better treatment. We always have to plan in advance to secure assurance about the availability of funds. If all such inmates are covered under the health insurance scheme, then, we will not have to think twice before sending them to any good hospital,” said a senior official in Birbhum.

In Rampurhat, around 55 inmates were enlisted for health insurance and the rest of the 135 prisoners needed other benefits. The officials said a WhatsApp number and an email ID would be provided to family members of the inmates to send their particulars like Aadhaar or PAN cards as proof of address and date of birth.
“We have decided to collect the documents virtually in light of the Covid-19 pandemic. If any family can’t avail itself of the facility, they can physically submit photocopies of those documents,” said a senior state government official.

Piyush Pandey, the ADG and IG of correctional services, said all jails had been asked to extend all types of cooperation to organise the camps in the presence of senior government officials’ supervision.