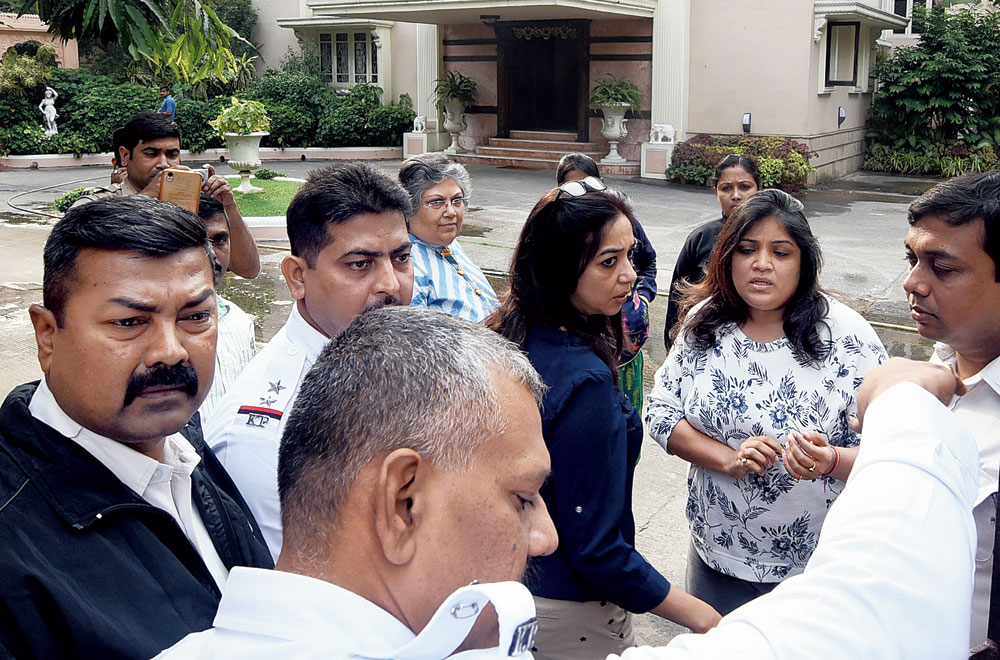 Nitya (second from right) and her mother (in striped kurta at the back) outside the Alipore bungalow of the Bangur family on Tuesday.
Picture by Pradip Sanyal
Sambit Saha   |   Calcutta   |   Published 11.12.18, 09:30 PM

A marital dispute in the house of the Bangurs, one of the well-known business families of Calcutta, spilled out of their bungalow in Alipore as an aggrieved housewife brought along a posse of lawyers, a court officer and police to assert her rights.

At the heart of the dispute is a battle between Virendraa Bangur, son of industrialist S.K. Bangur whose net worth is estimated at Rs 3,000 crore, and his estranged wife Nitya, daughter of the late Deepak Khaitan of the Williamson Magor group.

Nitya had walked out of the marriage and Bangur’s residence along with her two sons in June last year complaining of mental torture and harassment by her in-laws.

On Tuesday, she returned to the family mansion at 16 Alipore Road, nestled in the tony neighbourhood that is home to the rich and famous in the city, to collect her “stridhan” — the gifts that family and friends had given her during and after her wedding 20 years ago.

However, she did not walk into the 75-cottah prime address alone.

Besides the cops and lawyers, Nitya brought along her mother Yashodhara Khaitan, cousin of Sanjiv Goenka, who is chairman of the RP-SG Group.

Nitya, who now lives with her mother at Queen’s Park, was breaking with a tradition that prefers to settle marital issues outside the public gaze.

She was also armed with search and seizure warrants issued last week by the court of the chief judicial magistrate, Alipore, on the basis of her criminal complaint.

“The warrants were issued on the officers-in-charge of the Alipore and Ballygunge police stations (for search at the Bangur office in Central Plaza) to recover various articles that Nitya had said in her complaint petition belonged to her. Today’s operation only took place at the Alipore residence,” said Debanjan Mandal, partner of Fox & Mandal, the solicitor firm representing Nitya.

She claimed property worth several crores and all her stridhan which had not been handed over to her when she left for Queens’s Park in June 2017. The artefacts included silver items, valuable shawls, expensive saris, carpets, crockery, curios and showpieces, ivory items and paintings.

The articles also included her investment records, bank account statements and books lying at the office of S.K. Bangur on Sarat Bose Road.

She entered the premises around 2pm in the afternoon. The exercise ended around 11pm.

The Bangurs could not be contacted for comment despite several attempts.

In January this year, Nitya had filed a suit before Calcutta High Court on behalf of her two minor sons, who have laid claim to a share of the Bangur family fortunes. Under the Mitakshara school of law, the share of Nitya’s sons was valued at about 22 per cent, or Rs 700 crore.

The high court had asked S.K. Bangur and his family members to maintain status quo with regard to the joint family properties that were the subject matter of the suit. It also asked parties to seek the mediation of Justice Alok Chakraborty, which failed. The parties then went back to the court.

A settlement amount of Rs 150 crore was apparently fixed and papers were also drawn up. Alleged subsequent discord led to the criminal complaint being filed.