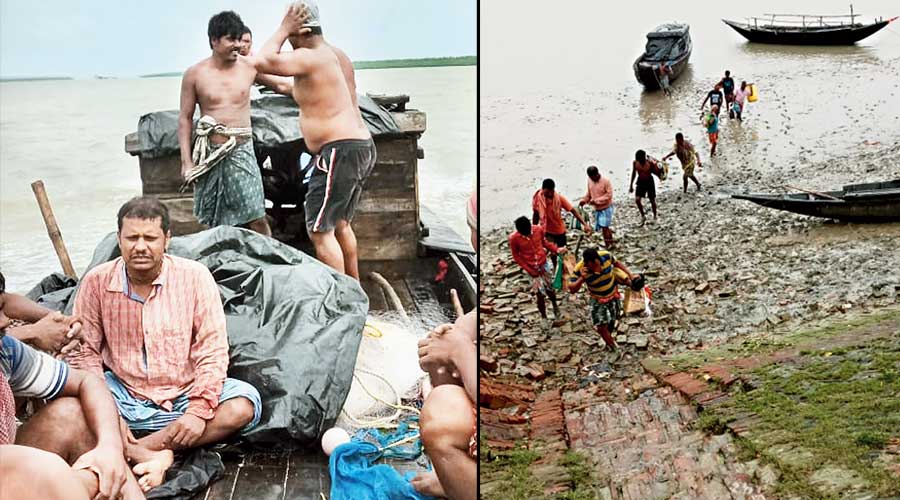 Fishermen on their way home in Raidighi after they were rescued by from the tiger reserve in the Sunderbans on Monday
Telegraph Picture
Snehamoy Chakraborty   |   Calcutta   |   Published 19.10.21, 02:26 AM

Nine fishermen from Raidighi in South 24-Parganas spent two sleepless nights on trees inside the tiger reserve of the Sunderbans to protect themselves from tigers after their boat toppled in Bidyadhari river during Saturday evening’s downpour.

The fishermen were rescued on Monday afternoon after a six-hour search by villagers who found the “missing” men on trees.

“We had to search extensively along the coast of the island to trace the missing fishermen who had left their homes in a boat early on Saturday,” said Yasin Gazi, a social worker in Raidighi who led the rescue operation on Monday.

Gazi said the operation to look for missing fishermen began on Monday morning after one among the nine men managed to make a call from his mobile phone to inform villagers about their plight.

“The phone network was very poor. He barely managed to give a faint indication of the place where they had taken shelter on trees,” said Gazi. “We launched the search after informing police. We also informed the cops after the rescue,” the social worker added.

Sanatan Mistri, one of the nine rescued fishermen, said they had left their homes to catch fish in the Bidyadhari river early on Saturday. But after dusk, the weather changed with heavy rain and gusty winds. ‘We tried to take our motor boat to a safe location. However, a sudden gust of wind toppled our boat near the coast of Shakhdowani forest.”

Shakhdowani forest of the island of the same name in the Sunderbans is a restricted forest under the tiger reserve.

“We did not have any option apart from climbing trees. We could not retrieve food and drinking water from the boat and the strong wind made us shiver in cold. We took shelter on top of three trees and every passing hour was a nightmare,” said Mistri.

Hasan Molla, another fisherman, added they saw pugmarks of tigers on the soft soil. “We knew tigers were around. We could not sleep for the fear of falling off trees. We are lucky to have been rescued.”

“It is unusual for boats to overturn in a river, such things happen in the sea. The accident was triggered by wind and heavy rain,” said an official in South 24-Parganas.

While the fishermen are happy to be back home in Raidighi, inclement weather has left the administration in coastal districts worried.

Following the formation of a low-pressure in the Bay of Bengal, coastal districts — mainly North and South 24-Parganas — are experiencing continuous rain and winds of 30-40kmph since Saturday evening. The Indian Meteorological Department on Monday said it would continue till Wednesday.

The IMD had earlier issued a warning for two days from Sunday, but its special bulletin on Monday mentions orange and yellow alerts for south Bengal districts including North and South 24-Parganas, Calcutta, Howrah, Birbhum, East and West Midnapore. These places are likely to see heavy rain till Wednesday.

“There is a forecast of heavy rain in most south Bengal districts till Wednesday. Later, low-pressure area is likely to move towards north Bengal,” said a weatherman in Calcutta.