New civic board to declare Darjeeling a ‘strike-free zone’ 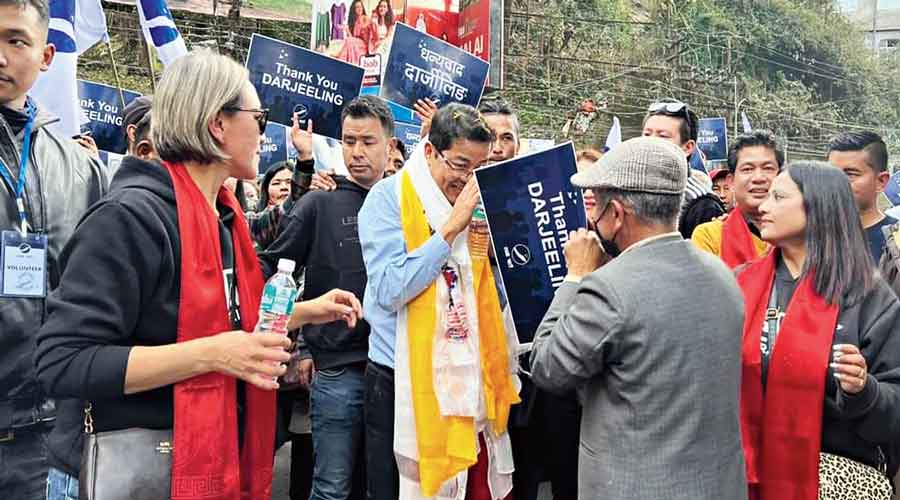 Ajoy Edwards, whose Hamro Party won majority of seats at the Darjeeling municipality in recent polls, on Sunday said the new civic board would declare the town a “strike-free zone”.

It is to be watched how the municipal board would implement the announcement as life was crippled occasionally in the Darjeeling town, along with the rest of the hills, in the past three-and-a-half decades in the name of statehood agitation.

The plan to turn the town into the “strike-free zone” was announced by Edwards when his party brought out a march here on Sunday to thank people for handing it victory in the elections.

“The people of Darjeeling have given us responsibility. Once we form a new board, we will take a few decisions, which include making Darjeeling town a strike-free zone, introducing Nepali as the official language of the municipality and releasing the accounts of the civic body every month, along with making public the balance sheet and assets of the municipality,” said Edwards.

Strikes have been a regular affair in the Darjeeling hills since the Gorkhaland agitation in 1986.

Mahendra P. Lama, former vice-chancellor of Sikkim University, had said on August 16, 2013: “In the past 27 years, the hills have been closed for 234 days. But there has been no result. Strikes are not good for the region and the focus on Gorkhaland must be from Delhi.”

Edwards with wife Namrata in Darjeeling on Sunday.
Telegraph Photo

On that day, the hills were observing a general strike called by the Morcha which was then headed by Bimal Gurung.

Taking into account the 104-day strike in 2017 and the 2013 shutdown, the hills have been closed for more than 300 days in the past three-and-a-half decades.
Edwards said his party was expecting that a notification for forming the new board would be issued by the Bengal government on Monday.

For the first time, the Darjeeling municipality will have formidable opposition in its 172 year old history.

In the recent polls, the Hamro Party bagged 18 of the 32 wards in Darjeeling. The Bharatiya Gorkha Prajatrantik Morcha (BGPM) which won nine seats is the main Opposition party. The Gorkha Janmukti Morcha and the Trinamul Congress won three and two seats, respectively.

D.K. Pradhan, a three-time chairman of Darjeeling municipality, said there had been hardly formidable opposition at the civic body in the past.

The Darjeeling municipality was set up in 1850 and the first election to the civic body was held in 1964. Polls were held in 1966 and 1984 also. Until 1984, the elections were not fought on political lines.

“The concept of a leader of the Opposition was not there during our time as apolitical people would contest elections,” said B.K. Pradhan, who had been the chairman from 1984 to 1989.

The next Darjeeling civic polls were held in 1994 and D.K. Pradhan was elected as the chairman of the Gorkha National Liberation Front (GNLF)-led board.
The Gorkha Janmukti Morcha led by Bimal Gurung and the GNLF on Sunday held meetings to assess the poll results. The Bharatiya Gorkha Prajatrantrik Morcha has convened a meeting on Monday for a similar exercise.