The event is being organised by a recently formed apolitical forum 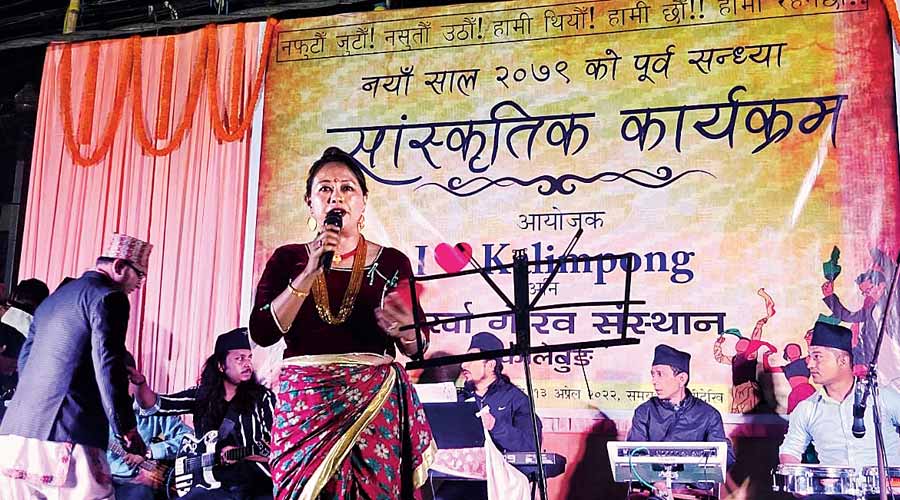 Kalimpong started a two-day Nepali New Year celebration from Wednesday evening avowedly to safeguard Gorkha pride and to bring about unity in the hills following the “political” fragmentation after the 2017 Gorkhaland agitation.

The event is being organised by a recently formed apolitical forum, Gorkha Gaurav Sanstan.

Narendra Tamang, one of the three co-ordinators of the forum, said: “The event is being organised to safeguard Gorkha pride, culture and tradition of the place and to bring unity among the hill people. The political development post-2017 (agitation) that has fragmented us politically pushed us into organising this event.”

In 2017, the Bimal Gurung-led Gorkha Janmukti Morcha started a protest against the state government’s alleged move to introduce Bengali subject in hill schools. It turned violent when chief minister Mamata Banerjee was in Darjeeling for a cabinet meeting and then morphed into an agitation for the state of Gorkhaland. The hills were closed for 104 continuous days. Politically, the Gorkha Janmukti Morcha got fragmented into two factions. The Akhil Bharatiya Gorkha League got divided into three factions.

Two new political parties, the Bharatiya Gorkha Prajatantrik Morcha and Hamro Party, were formed in 2021. Another new party is set to be floated in the hills next week, and with it the 10-lakh hill population will have 17 parties to choose from.

Against this backdrop, Tamang said: “There is a general feeling that we lack unity. Irrespective of political affiliations, we want everyone to unite as a hill community. If we can have a New Year’s Eve and New Year celebration, why not a two- day celebration to welcome Nepali year 2079.”

Political leaders from the hills have also been invited for the event to be held at Kalimpong Mela Ground on Thursday.

The celebrations, however, started from Wednesday evening with a cultural show at the town’s Main Road.

On Thursday, a cultural rally will start and end at Mela Ground after moving around the town. Cultural events have also been lined up.

The All India Women’s Conference will put up stalls with traditional food while the Marwari and Bhojpuri organisations water and juice stations during the cultural rally in town.

“We have requested all to try and attend the celebration in traditional dresses,” said Tamang.