Naysa Sheikhs seek cash for board 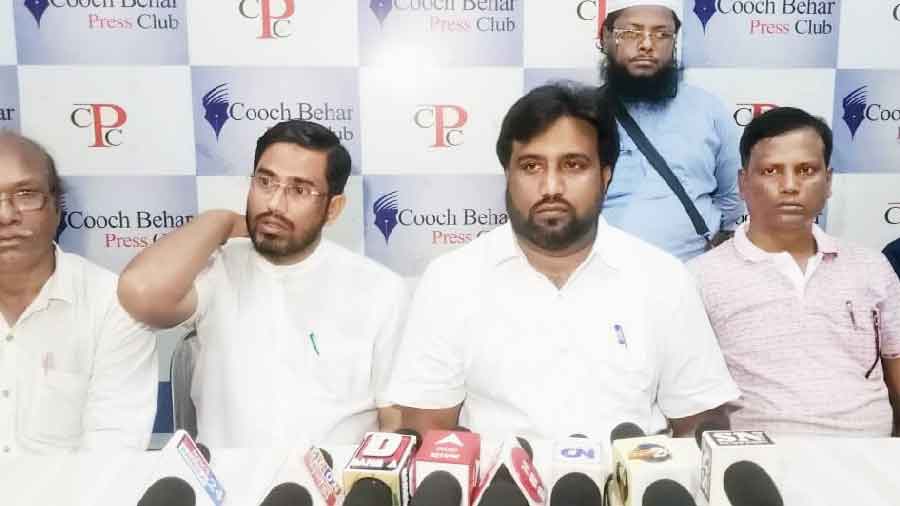 Aminal Haque (second from right) with others from the community in Cooch Behar on Wednesday
Main Uddin Chisti
Our Correspondent   |   Cooch Behar   |   Published 14.07.22, 01:13 AM

Representatives of the Nasya Sheikhs, a Muslim community of north Bengal, have urgently demanded an office of their development board and funds from the state government for the socio-economic uplift of poor members of the community.

They have also threatened a movement if their demands are not met by next month.

“Almost one-and-a-half years have passed since the state formed the development board for our community but till date not a single meeting has been held. The board doesn’t have any office and not a penny has been allocated to it. The state government should immediately take necessary initiatives as lakhs of Nasya Sheikhs are being deprived from benefits that other development boards give the communities concerned,” said Aminal Haque, the general secretary of the Nasya Sheikh Unnayan Parishad, an apolitical association that represents the community.

In February 2021, the Mamata Banerjee government issued a notification for the West Bengal Nasya Sheikh Development Board. It comprises seven members and is chaired by the district magistrate of Cooch Behar.

According to Haque, around 45 lakh Nasya Sheikhs live in north Bengal.

“In Cooch Behar, Alipurduar, Jalpaiguri, Darjeeling and Kalimpong, Trinamul did not field one candidate from our community, yet we backed the party. There are 18 development boards and all other boards have received funds and infrastructure. Our board has only been announced, nothing else,” Haque added.

The representatives also said when the state had announced Narayani battalion — a battalion of state police in the name of Narayani Sena (the troops of erstwhile royals of Cooch Behar), with its headquarters at Mekhliganj of Cooch Behar — they had demanded that around 50 per cent of vacancies in the battalion be reserved for them.

“We do not have any quota of vacancies in the battalion. Also, we do not have any inkling as to how the funds of the state minority affairs department are being spent. Our community continues to remain backward. If our demands are not met immediately, we will launch a movement from August,” said a Parishad representative.

A senior Trinamul functionary of Cooch Behar said they would inform the state leadership of the demands raised by the Naysa Sheikhs.

“Chief minister Mamata Banerjee has consistently taken efforts for the socio-economic improvement of the minorities in our state. We will apprise our state leaders about the issues so that necessary initiatives can be taken,” said the leader.