They are also likely to share the stage during a programme on Sunday, 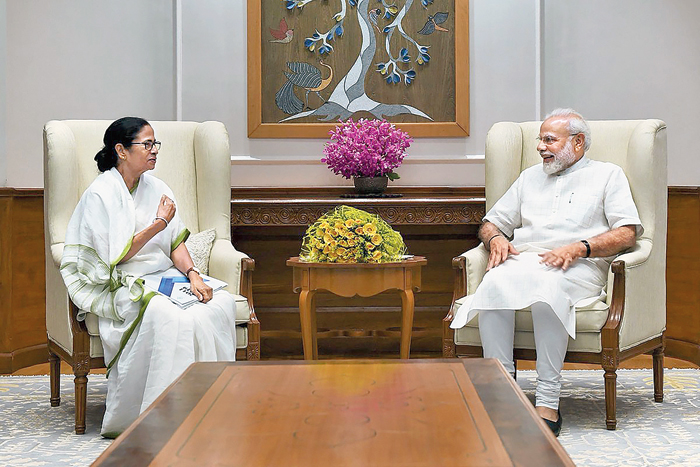 They are also likely to share the stage during a programme  on Sunday, a source in the Banerjee-led Trinamool Congress (TMC) said.

Modi will be on a two-day visit to Kolkata from January 11, amid ongoing protest at various places in the state against the amended citizenship law.

'As far as we know, she (Banerjee) will attend a programme of the Kolkata Port Trust (KoPT) on January 12, where the prime minister would also be present,' a senior TMC leader told PTI.

Both the leaders are also scheduled to hold a meeting at the Raj Bhavan here on Saturday evening, according to a highly-placed official at the state secretariat, who added that Modi will reach the city at around 4pm as per the schedule.

'The PM and the chief minister will be meeting at the Raj Bhavan tomorrow soon after he reaches the city, the official told PTI.

However, the agenda of the meeting between Modi and Banerjee was not disclosed.

Minister of State for Shipping Mansukh Mandaviya had gone to the state secretariat on Friday to invite Banerjee to the 150th anniversary programme of the KoPT.

The significant political development comes a day after Banerjee had said in the state assembly that she would boycott an opposition meeting called by Congress president Sonia Gandhi on January 13 over the JNU violence, the Citizenship (Amendment) Act and other 'anti-people' policies of the Centre.

Ever since the BJP emerged the main contender of the TMC in West Bengal following the Lok Sabha poll results, Modi and Banerjee have not shared the dais at any government programme.

The chief minister had gone to New Delhi in September last year and met Modi in a 'courtesy call' visit.

The new citizenship law has emerged as the latest flashpoint in the state, with the TMC opposing the contentious legislation tooth and nail, and the BJP pressing for its implementation.

The West Bengal BJP leadership, however, said it is expected that in a federal structure, a chief minister will be present at a government programme attended by the prime minister.