Named after Sita, brought from America 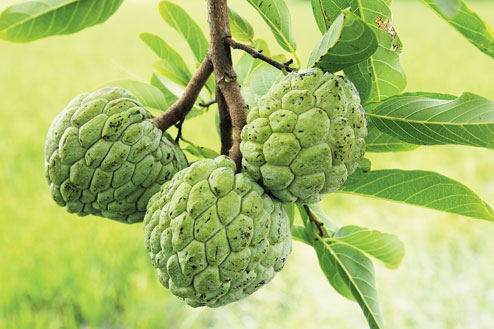 Not just Sitaphal; there are also fruits named Ramphal and Hanumanphal growing in India but despite the Ramayana connection it is curious to note that they all originate in America.

All of these originate in America and their arrival in India is much debated. When the Portuguese came to India they brought these fruits with them, but it is likely that Custard Apple was already growing in India by then since it finds mention in Ain-e-Akbari, the 16th century documentation of Mughal emperor Akbar’s kingdom. It is also seen in the paintings of Ajanta and in the sculptures of Mathura.

Today, the Custard Apple is a popular fruit in Bengal. Ramphal is also cultivated in Bengal but in a limited scale. It is rare in Salt Lake.

Earlier, Custard Apple plants came up unattended in various parts of the country as a shrub or hedge plant but of late exclusive orchards have come up in places like Andhra Pradesh and Maharashtra.

The Custard Apple is a small, shallow-rooted, well-branched tree or shrub that reaches up to a height of 10 to 25-ft. It has spreading branches and a short trunk. Its simple alternate leaves are two to six inches long and rounded at the base and pointed at the tip.

Conditions: To grow well the plant requires tropical climate with summer temperature between 25 and 41 degree centigrade. It won’t grow well in cold and frosty conditions. Custard Apple may withstand moderate drought conditions but prolonged drought would affect fruit production. An annual rainfall of 70 to 80cm is optimum.

The Custard Apple is not particular about its soil type. Though it thrives well in rocky terrain with gravelly well-drained soil, it can also adjust to other types and may grow well in sandy soil that is slightly acidic. But heavy soils are not suitable, especially in waterlogged areas.

Propagation: Almost all Custard Apple trees in India have been propagated from seeds. It is always better to use fresh seeds as a seed’s potency reduces after three or four years. Custard Apple’s seeds are often hard coated and they can be softened by soaking in water for 50 to 70 hours.

Seeds are slow to germinate and take about three to four weeks to do so. The period can even extend to eight weeks. When the seedlings are four to five inches long transfer them to small pots or polythene bags containing sand or peat or equal parts of garden soil, sand and farmyard manure (FYM).

One-foot long seedlings are ready for transplantation. Excepting some varieties of Custard Apples, like the mammoth, seed-originated plants are not true to type and to overcome this drawback vegetative propagation like grafting and budding may be adopted.
Dig pits of 60cmx60cmx60cm and leave open in the sun for at least a week. Then fill the pits with top soil mixed with 25 to 30kg FYM. In case of orchard plantation Custard Apple may be transplanted 5Mx5M apart. Some times for better pollination and better fruit set close spacing of 4mx4m is adopted. If adequate irrigation is carried out in spring the plants are able to establish roots in summer and grow vigorous during the rains.

Care: Custard Apple trees do not require much care and it is enough to water them regularly and allow enough light for growth. Applying fertiliser to Custard Apple trees is not common but the plants will respond well to organic manure with suitable dose of 25 to 50kg per plant per year.

Custard Apples start bearing fruits at the age of four to five years. They produce single crop in a year between September and November. The fruits are round to conical in shape, weighing 100 to 250g with thick rind composed of knobby segments. The colour is typically pale green to bluish green and the segments begin to separate when ripe. The flesh is creamy white to light yellow, sweetly aromatic, resembling and tasting like custard. The shiny seeds are brown to black in colour all though certain varieties are seedless.

Matured fruits are generally packed in straw. They ripen within five or six days but must be consumed in another two or three days.

Uses: Custard Apple is an excellent source of vitamins, manganese, phosphorus and potassium. The pulp of the fruit, mixed with milk, makes for delightful drinks and ice cream and its juice is used to make squash, syrup, jam and jelly. Various parts of this tree have medicinal properties. It is a host plant for butterfly larvae.

• Known in Hindi as Sitaphal, its close cousins are Bullock’s Heart (Ramphal) and Cherimoyer (Hanumanphal)