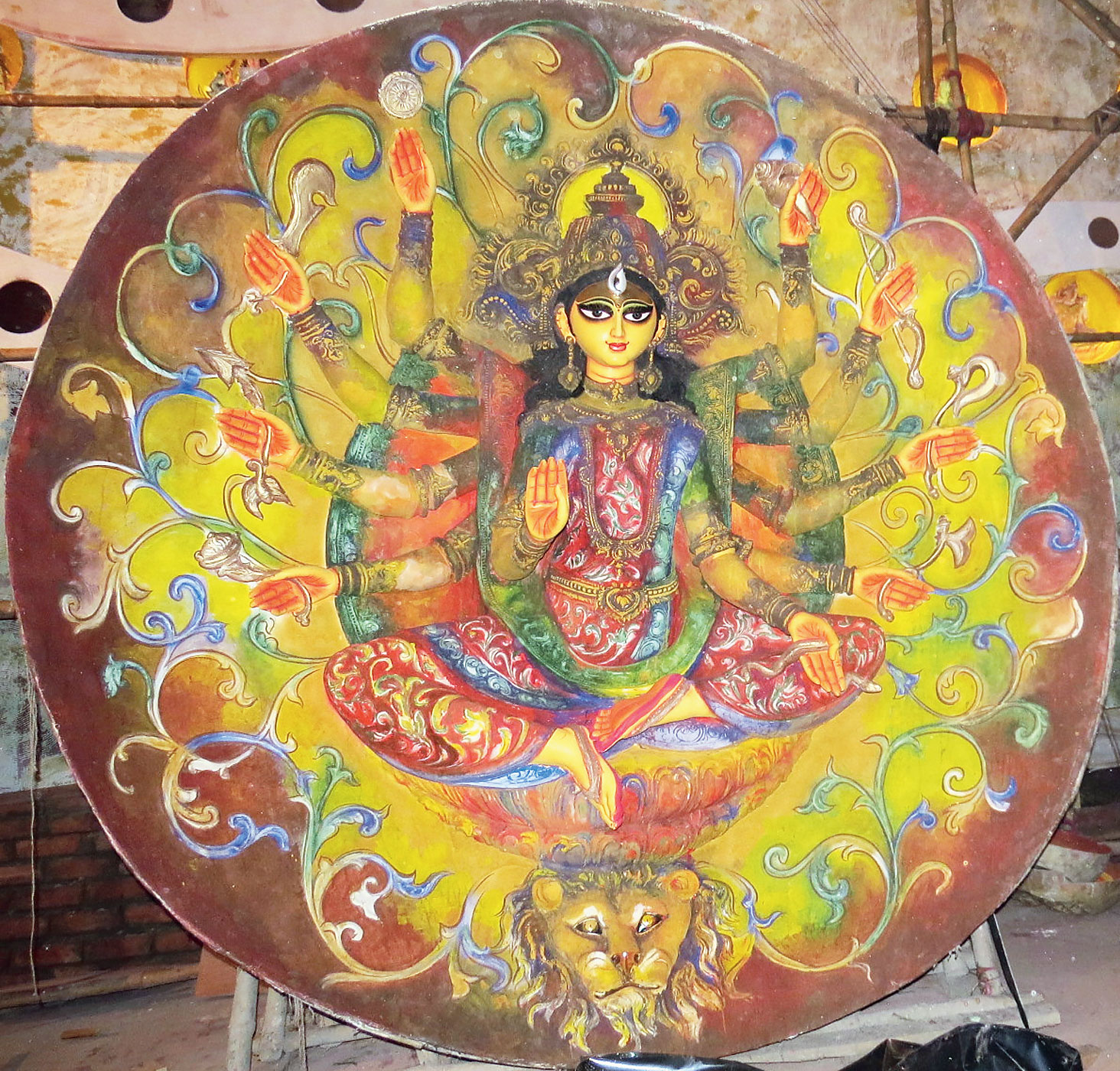 The idea: If we die without rising above any of the six basic instincts, we will not be free of the cycle of reincarnation and have to be born again.

The look: Star sculptor Pradip Rudrapal is back where he started from after a gap of 17 years. A metallic hemisphere with the idol inside will be suspended from a vertical rod. The hemisphere will form the innermost circle. Around it will be three concentric bands depicting the basic instincts. Two will rotate clockwise and one in anti-clockwise direction. From the 10 hands of the idol flares in relief will spread across the pandal walls reaching right to the entrance. In little holes on these flares will be mini replicas of the weapon held in the hand from which it emanates, increasing in size from six inches to 1.5ft. Gods who gifted those weapons to the goddess will be seated in coves created all across the wall.

The sculptor, now a resident of BJ Block, has himself lent voice to the background song Anandoloke Mangalaloke.

The look: The pandal is an imaginary palace, said to belong to Chandragupta Maurya, rising to about 90ft.

The Chandrayan speceship will be the star attaraction in the illumination section. The goddess will be decked in gold jewellery.

The idea: In Krishanu Paul's vision, all of us are connected to the Supreme Being.

The look: White balls, slightly bigger than ping pong variants, represent atoms which represent the core of every structure. Inside the pandal they create various shapeless forms some of which change colour. The ceiling represents the pitch dark sky with stars twinkling. Bigger balls, symbolising molecules, hang overhead. A tree of life stands in the middle, with a chain of hands clasping each other forming the veins. The idol is huge and unusual, being symmetric at the top but asymmetric at the bottom where the divine children are present in various postures at different levels. Joy Sarkar's music creates a cosmic ambience.

The idea: A slice of tribal life has been portrayed by artist Prasanta Pal, who is back here after 2011.

The look: The inner walls coated in clay have clay waves in relief over which dongas (small boats) made of palm tree trunk sail. To the right, a tribal goddess is seated against a background of broken earthen tiles. Elsewhere a vertical crocodile figure has been created with pieces of tiles. The pandal is a huge hut decorated with components of tribal life — coconut leaf broom, coconut bark, date palm leaf, jute sticks, clay handis and earthen tiles. The goddess stands on the head of a buffalo whose horns form a crescent over which stand the divine children. The chalchitra is painted in Chhattisgarh tribal style.

The idea: A tribute to transgenders who are kept outside the mainstream by theme-maker Anirban.

The look: Rainbow colours on kites dot both side as one approaches the pandal. A locked room has been built in which a young figure is visible through the window. Opposite the window, on the other side of the approach, hang screens on which activities of transgenders are projected - begging for money from passengers in cars at traffic signals, playing dhol and singing to bless a newborn… The young person, kept away from society by the family out of shame, thinks of such a future. Arjun stands as himself and on the opposite wall as Brihannala, the guise he took in the Pandavas' years of anonymity. Giant topors, for both bride and groom face each other, as a reminder of a life they are denied. Chaitya Deb who is said to have imagined himself as Radha in his worship of Krishna, stands at the entry to the middle segment of the pandal. Overhead a transgender figure, fully decked up in women's clothes and accessories, has been released from a giant cage. The anchal of the sari flies like a wing. The walls are lined with hair braids. Numerous palms, standing for the resounding claps of transgenders, take shape of colourful macaws set to take wing. The idol has been crafted by Sanatan Dinda. Transgenders have lent voice to the background score by Satadal Chattopadhyay.

The idea: In Krishanu Paul’s vision, all of us are connected to the Supreme Being.

The look: White balls, slightly bigger than ping pong variants, represent atoms which represent the core of every structure. Inside the pandal they create various shapeless forms some of which change colour. The ceiling represents the pitch dark sky with stars twinkling. Bigger balls, symbolising molecules, hang overhead. A tree of life stands in the middle, with a chain of hands clasping each other forming the veins. The idol is huge and unusual, being symmetric at the top but asymmetric at the bottom where the divine children are present in various postures at different levels. Joy Sarkar’s background music creates a cosmic ambience.

The theme: Save water save life

The idea: In a world where drinking water crisis looms, the solution is to harness unconventional energy and use stored rain water.

The look: The eternally parched mythical chatok pakhi stands at the entrance. Its head is human. On either of its sides, two giant wheels stand, symbolising machines that will save and use rainwater. The pandal is an ode in bamboo art. About 1000 bamboo poles have been bought. A thicker variety, called tolta, has been procured from Contai. The biggest eye-catcher is a chandelier crafted out of bamboo slices.

The idea: The way we are destroying greenery, a day will soon come when we will have to fight for and pay to breathe in oxygen.

The look: In artist Rintu Das's dystopian vision, one faces a giant sandclock at the entrance, reminding us that time is running out for us. An inner slice of a hemisphere shows greenery being taken over by innumerable apartments. The developers' claws have spread even into the water with apartments floating on Tank  that is adjacent to the puja site. The pandal itself is in the shape of a globe of which the spinal chord, looking like water pipes on building walls, stands exposed. Little girls, oxygen cylinders on their backs and breathing through masks, climb its sides saplings in hand. Inside, an old mansion has been taken over to be promoted with only the thakurdalan still standing for one last puja amid the demolition. Even the pillars seem to bleed from within, because of diffused red lights fitted inside. The sandstone idol, with an old world look, weighs 1.5 tonne. In the final section, an intensive care unit has been set up where a dying tree lies. But there is hope in the sapling that is springing from it.

The idea: Without education, a lot around us seems abstract.

The look: At the entrance of the pandal conceived by Purnendu Dey stands a 30ft book, from the partially uncovered skull of which letters and figures flow out. A tiger's head stands captioned in Chinese. Only those who know the language would know it is tiger. The first segment has yantras or specific geometric shapes, by meditating on which the power of Nature or state of being ingrained in it can be attained. But few know the significance of these shapes. The sanctum sanctorum is a cosmic space where Durga sits in meditation. On the sound system the same raga, beyond the layman's ambit of appreciation, plays based on which light music, composed by Joy Sarkar, was playing in the segment outside.

The idea: In times of global warming, nabapatrika stands for plant life.

The look: One walks in under an arch of branches of a chopped tree from which twigs are sprouting, in the tree’s desperate bid to live. In the outer section, eight forms of the patrika are present in relief on the walls on either side. At the centre, there is an installation of a tree in which a tree-shaped man and woman are locked in embrace with a child at a side. The goddess is imagined as turmeric, the ninth plant. The chalchitra too has turmeric branches, along with the four divine children.

The idea: Durga is Annapurna, who provides food, or literally rice. Hence she is worshipped in a ration shop go-down.

The look: A gigantic cycle hangs on the façade with a tiffin-carrier occupying the cyclist's place. Quite a few silver-coloured cycles hang at its sides. Market stalls stand all around the go-down where the puja is taking place. Inside, sacks of rice, cartons of biscuits and cans of oil stand stacked high almost to the high ceiling. An inverted handi hangs from the ceiling. The mouth of the handi has a screen on which is projected a continuous film of rice boiling. The gurgling sound in the background complements the visual. Glass containers with spices are used as décor in the chalchitra. Some ladders, a common sight in godowns, hang from the top in the sanctum sanctorum. Over the goddess's crown at the back, three handis are placed, one over the other, looking like an extension of the crown.

The idea: A journey to the moon.

The look: On the facade, a waterfall-like effect is created through the play of light on foam and net. Overhead, a smiling child’s head blooms from a flower. Inside, a moonlit night has been created.

The idea: Unholy forces are trying to create divisions in our social fabric.

The look: An umbrella of 30 ft diameter stands at the entrance providing shelter to all visitors. But a 6ft wood mite lies in wait at the top of the entrance. Inside, multiple pillars stand as foundations of inter-faith relations, but they too have been attacked by wood mites. At the top of a slope, a machine stands. From it, built of the same material, various places of worship have toppled out. At its mouth, where a sheet has been fitted, intermittently a hand is being projected. It knocks at the door and a voice answers from time to time with varying responses - ami Ram, ami Rahim, ami Peter -- with separating them except their names. Further inside, 700 umbrellas hang from the ceiling with surrounded by religious symbols and woodmites. In the sanctum sanctorum, an Indian map stands on the wall peopled by numerous, distinguished by nothing but the religious symbol on their foreheads. The idols are in dokra style, made of brass. They will be in suspension over a pool of reddish boiling water.

The look: Kushmundi village in South Dinajpur, famous for its gambhira masked dance, is in focus here. A two-faced head, nine foot in height and wearing a mask rising to another five foot, stands at the entrance. Another 20ft mask looms over the gate. About 150 masks of various sizes have been used in the décor. Six life-size dancer figures have been created which will stand on either side, fully dressed as dancers. The club has invited a team of 14 dancers from the district to perform gambhira near the pandal from October 1 to 5.

The idea: Darkness is not the end. Rather, it brings hope of a new dawn, as Lopamudra Mitra sings in the theme song.

The look: As one approaches, a beggar sits, begging not for money but for light. A beam of sunlight falls in his bowl. A gigantic wooden boat has been crafted on which visitors have to climb. There is an illusion of water on the sides. On the boat, at first, it is semi-dark around as the boat is painted black, bronze and red. Under the shelter, vignettes of people at work have been carved on the wooden beams. Then one walks into a huge sun to the sanctum sanctorum. Opposite the goddess stands a figure who is being bathed in light.