The last time Sruti abandoned a cub, it did not survive 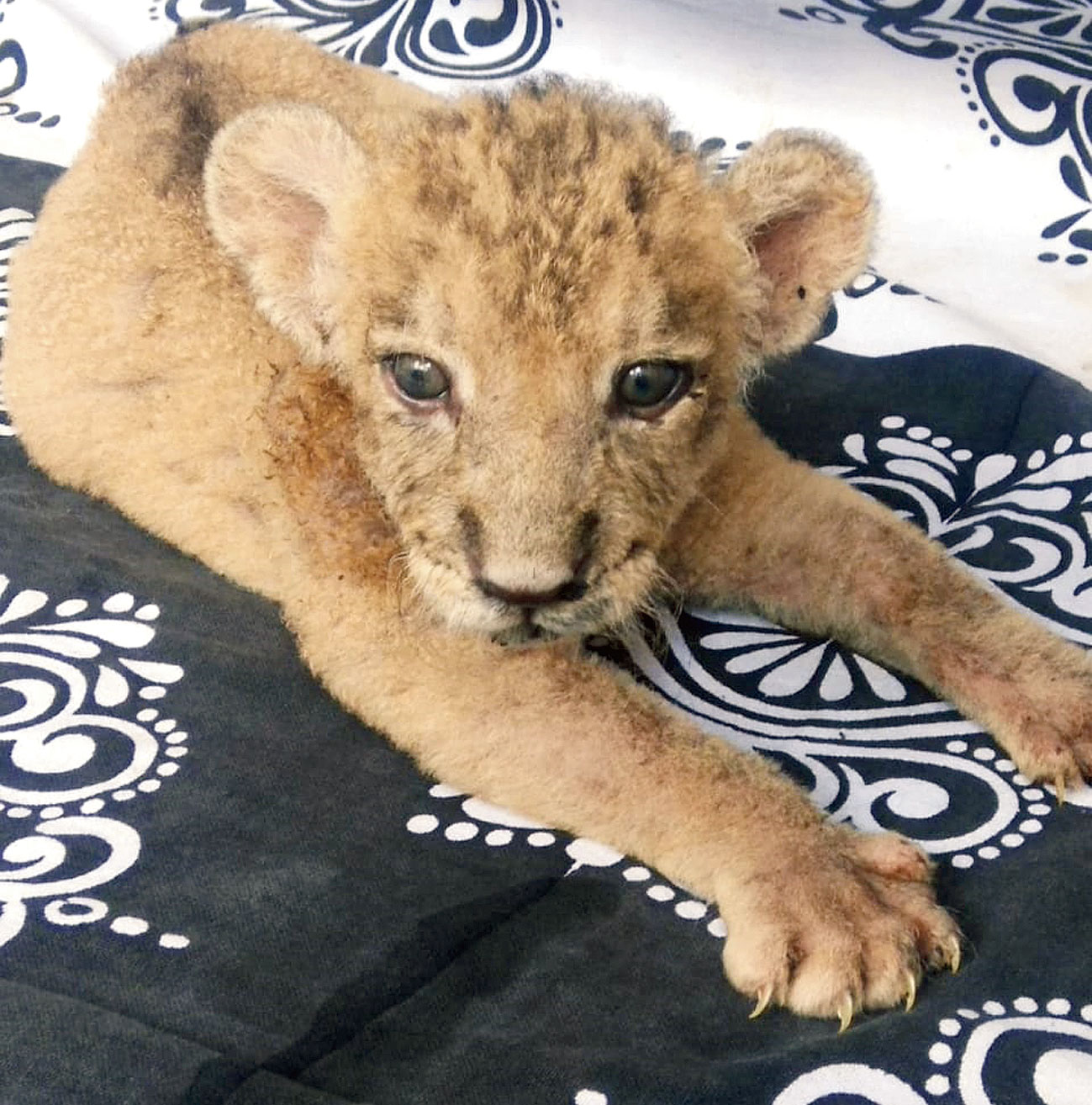 On July 1, a 110kg lioness at Alipore zoo picked up a two-day-old cub in her mouth and separated it from her litter.

The last time Sruti abandoned a cub, it did not survive. But 45 days on, her latest offspring is alive and kicking, just across the road.

The cub, weak and unable to drink from the mother, was rushed to the zoo hospital in the nick of time and revived by a team of vets and a trusted keeper.

On a diet of condensed milk (30ml each six times a day), the cub has recently been introduced to a stock of chicken and liver. “We are giving it vitamin supplements because it is unable to get mother’s milk. We want it to start eating meat soon to ensure it gets enough protein,” said a vet at the zoo hospital.

A little larger than a kitten, the male cub is kept in a 4ftx3ft wooden cage. For 40 minutes each in the morning and evening, it is taken out of the cage and made to walk. “The cub’s favourite spot is a bed, though. It loves the soft cushion and cuddles up to the keeper,” said a vet at the hospital. It weighs over 2.5kg now.

Sruti, a seven-year-old Asiatic lioness, had given birth to three cubs on June 28. The first two cubs were fine. But the third grew weaker with time and was having trouble crawling up to Sruti, said a zoo official.

The keepers had to outmanoeuvre Sruti to feed the weaker cub from a bottle after the first day, hoping it will gain some agility after the dose of milk. But that was not to be. 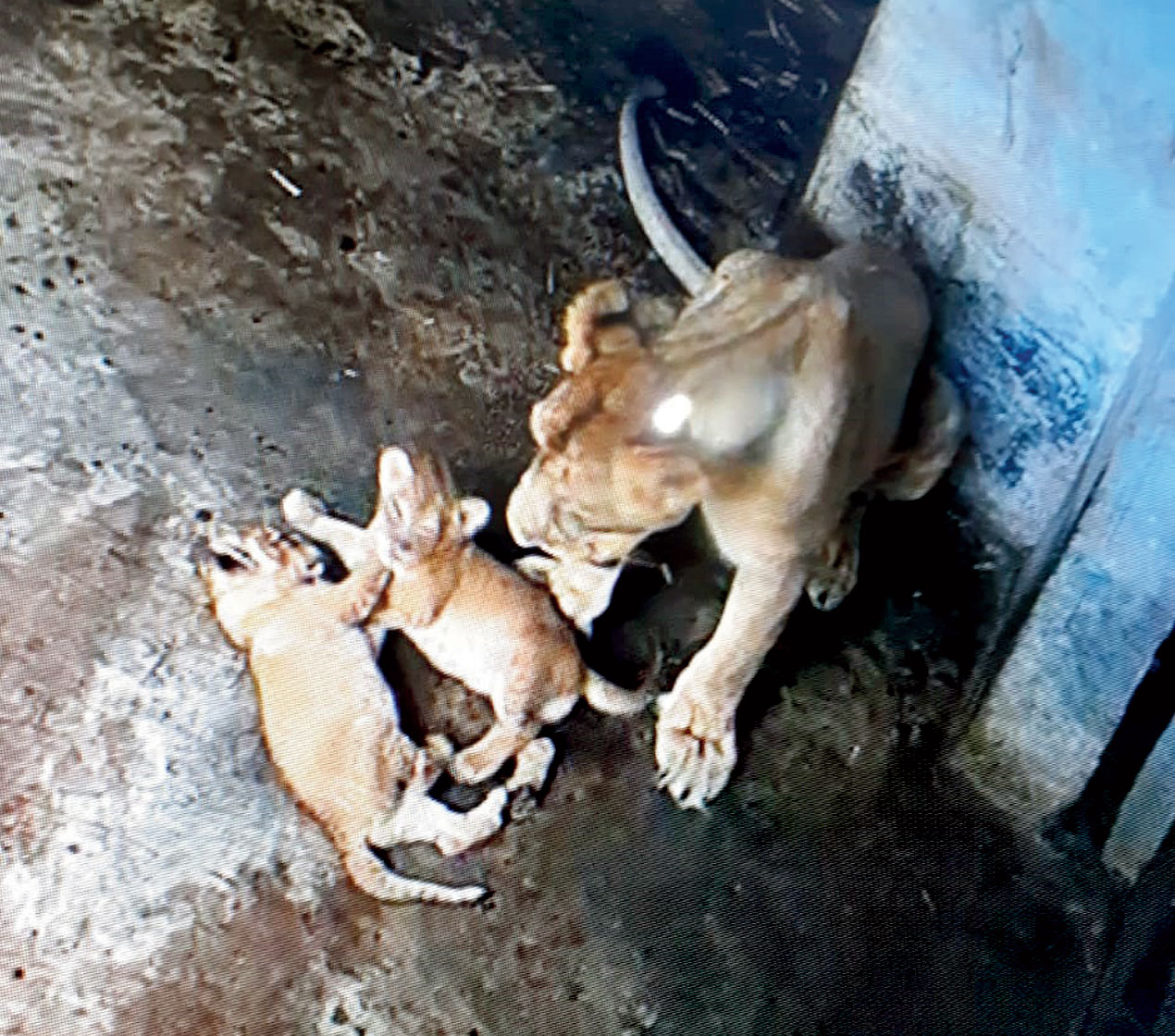 Sruti with two of her cubs.
Telegraph picture

The first two cubs were drinking from Sruti once every hour, but the third cub was weak from the start. On at least two occasions, Sruti tried feeding her but she was not able to drink properly. While the other two cubs were crawling and moving freely, the third lay listless, looking drained already. The authorities decided to intervene in the afternoon on June 1.

“CCTV footage showed that the cub tried to drink from her mother around 2.30am on June 1. Around 10 hours later, Sruti lifted the cub in her mouth and placed it at another corner of the enclosure. She licked it for a few seconds before turning back to her litter,” said Asis Kumar Samanta, the zoo director who was awake the entire night with a team of vets, tracking footage from the shelter.

Sruti had given birth to another cub in September last year. Underweight and weak, the cub died after being abandoned by the lioness.

“Big cats can sense if a cub has little chance of survival. They abandon that cub and there have been instances of a mother killing the cub herself,” said Samanta.

Sruti would not let even trusted keepers near her enclosure after giving birth. The authorities had to outfox her to take the weak baby

away. The shelter has four doors that can be opened and shut with the help of a winch from the top. The doors lead to another room inside the enclosure.

Sruti was given meat in the room in the afternoon. One of the doors was opened and Sruti went there with the first two cubs. The door was then shut and the third cub separated. A keeper then entered the shelter and brought the cub out and first fed it some milk from a bottle before shifting it to the hospital.

“The first few days were tense. We were not sure if the newborn would survive. But the cub has adapted well and feels at home at the enclosure now,” said V.K. Yadav, member-secretary of Bengal Zoo Authority. The cub weighs around 2.5kg, normal for its age, the vet said.

Shewnarayan Ram, a keeper with three decades of experience in handling big cats, has been deputed at the hospital to take care of the cub.

At the zoo, Sruti is doing fine with her two babies. “They have grown into mischievous and playful cubs, always keeping their mother busy,” said Samanta. They are primarily having mother’s milk but are curious about the meat that Sruti eats.

The three cubs will be kept together once all of them take to meat properly, Samanta added.