He promised that the Centre would ensure arrears of the PM Kisan Samman Nidhi, a minimum income support for farmers, were paid 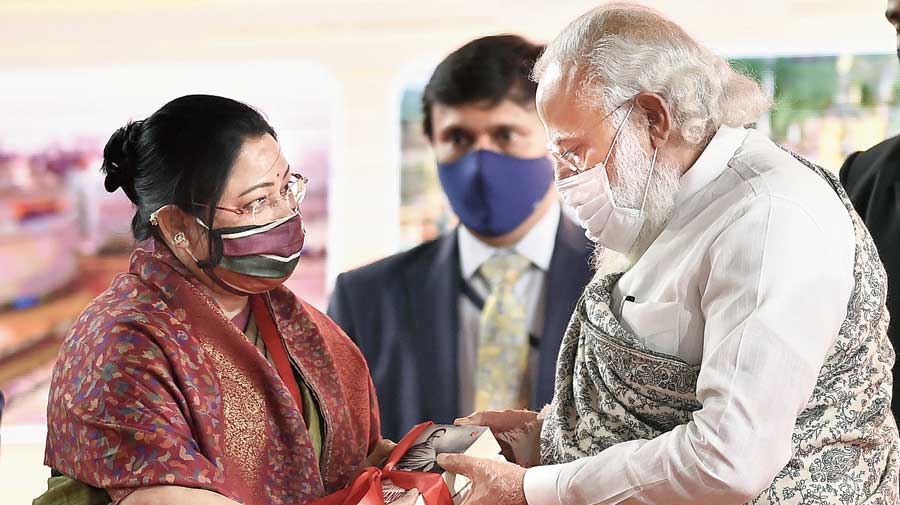 Prime Minister Narendra Modi on Sunday listed the agenda of the BJP government’s first cabinet meeting in Bengal after the Assembly elections.

“You (the people of Bengal) have decided to bring the BJP to power after these polls…. We will implement all farmer-related central projects in our first cabinet meeting,” Modi said.

He said a resolution would be adopted to execute all central schemes that people of Bengal had been deprived of allegedly because of the Mamata Banerjee government’s unwillingness to implement them in the state.

Sticking to the BJP narrative set by Union home minister Amit Shah that the saffron party would sweep Bengal polls with over 200 seats, Modi promised that the Centre would ensure arrears of the PM Kisan Samman Nidhi, a minimum income support for farmers, were paid to the state’s farmers.

This announcement holds political significance at a time the Centre is in a bind on how to end the ongoing farmers’ protest against the three contentious farm laws supported by the Opposition, including Trinamul.

In a bid to turn the tables on Mamata, who pledged her support to the farmers’ movement, Modi tried to project her as anti-farmer.

“Over 25 lakh farmers from Bengal have applied for the PM Kisan Nidhi. After declining to be part of the scheme for months, the government sent a letter informing its decision to be part of the project... But, the Bengal government has been able to identify only 6,000 farmers in so many years,” Modi said, accusing the state government of not cooperating with the Centre.

“The Union government is not being able to pay even these 6,000 farmers either, as the state has not sent the bank details of the state agency. This is how they are delaying (the process),” he added.

The Prime Minister also referred to the state government's unwillingness to be part of the Ayushman Bharat scheme, a Rs 5 lakh medical insurance scheme of the Centre.

Multiple BJP sources said that the reference to the central insurance scheme was to try and to prevent the Mamata government from deriving brownie points from the state’s Swasthya Sathi health scheme that has created excitement in Bengal.

After holding forth on how the Mamata government denied people their rightful entitlements, Modi launched a new angle of attack.

“In Bengal, if you ask Didi about your rights she gets frustrated. She even gets angry if slogans of Bharat Mata ki Jai are raised. But she never gets angry with people who speak against the country and spew poison,” he said.

“You must have seen the news of international conspiracies to defame India...The conspirators are so keen to defame India that they are even attacking India’s identity as a tea-producing country. This is a conspiracy to attack the hard work of tea workers. Yoga, which is an Indian tradition...given to the world by stalwarts like (Sri) Aurobindo and (Swami) Vivekananda, is also under attack...But have you ever heard Didi utter a sentence against these conspiracies and conspirators?” he added.

The Bengal polls, likely to be held in multiple phases, are still around two months away as the Election Commission of India is yet to announce the poll schedule, and around 35 days are mandatory to allow political parties to campaign for the hustings.