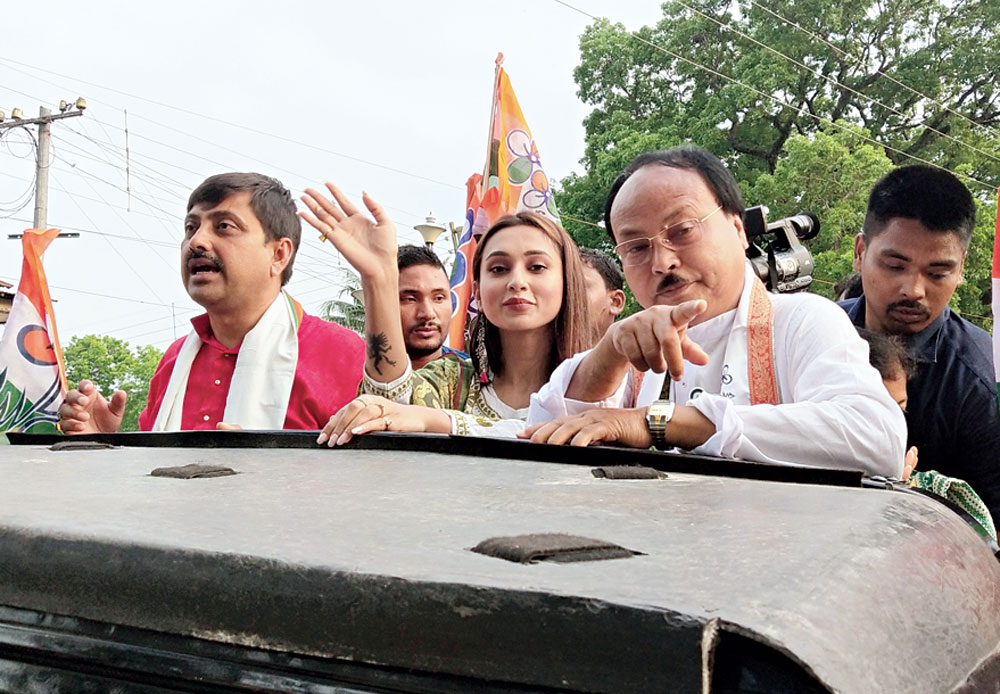 Actress Mimi Chakraborty touched down at her old town on Monday to campaign for the Trinamul Congress’s Jalpaiguri candidate and managed to draw large crowds to a road show and a public meeting.

The Tollywood star is contesting from the Jadavpur seat on a Trinamul ticket.

On Monday afternoon, she reached Parker More in Pandapara and spoke at a public meeting. Hundreds had gathered to hear Mimi, who had stayed in Jalpaiguri during her school days. Her parents still live in the town.

“I prefer to talk less and work more. There are some people who have been saying I don’t have experience in politics. I want to make it clear if you want to work for people, you don’t really need experience. I have the blessings of Mamata Banerjee to contest the elections,” she said.

The actress, who urged Jalpaiguri residents to vote for the Trinamul candidate, Bijoy Chandra Burman, said she was highlighting the development works carried out by the Mamata government. “I am not paying heed to the criticisms and instead, focussing on my campaign. In coming days, I want to work as an ordinary Trinamul worker,” she said.

After Mimi’s candidature had been announced by Mamata, the party planned to bring her to Jalpaiguri to garner votes, particularly those of young people. “She had spent years in Jalpaiguri and has a good number of fans here. There is even a fan club in her name and we feel her campaign will be effective,” said a Trinamul leader.

After the public meeting, Mimi joined a road show with Burman and Sourav Chakraborty, the Jalpaiguri district Trinamul chief, and moved through a few streets of the town.

The actress had arrived at her house in Pandapara here on Sunday evening.

On Monday morning, she took the rickshaw of Sanjay Paswan, who used to take her to school in Jalpaiguri, and reached a local Kali temple.

Later, the star was felicitated by the Mimi Fans’ Club floated by Nabin Sangha O Pathagar, a club at Pandapara, a few years back. “It is almost after 16 years that I am staying at my home during the Bengali New Year. I will return to Calcutta after casting my vote on April 18,” she told the media after the felicitation.

Abhijit Das, the secretary of the fans’ club, said: “We are associated with different social works. As Mimi is contesting elections, a team from our club and some residents of Pandapara will go to Jadavpur to campaign for her.”