Display boards showing the real time left in the arrival of a train are being installed at Metro stations in Calcutta. 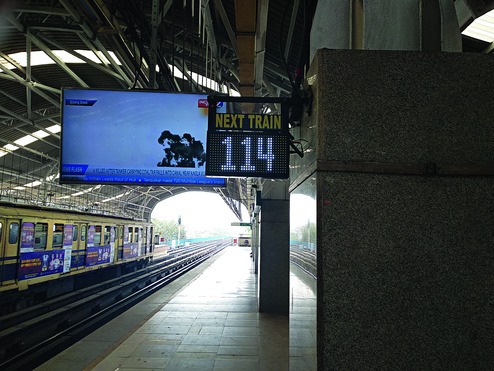 Calcutta: Display boards showing the real time left in the arrival of a train are being installed at Metro stations in Calcutta.

The boards will start a countdown the moment a train leaves the preceding station. The countdown will start at 120 seconds at most stations and move to zero by the time the train stops at the station.

There will be two boards each for Up and Down trains and two in the station master's cabin.

Bansdroni (Masterda Surya Sen) and Garia Bazaar (Kavi Nazrul) stations are among a few stations which have already got such display boards. "The machines were installed a couple of weeks ago," an official at one of the stations said.

A city-based manufacturer of electronic and telecommunication products has been entrusted with the project.

"All the stations will have the boards by the middle of March," a Metro official said.

The existing display boards that show the expected arrival of trains operate according to the schedule. Trains often don't follow the timings shown on the boards.

"The countdown boards will show the actual time left for a train to enter the station," the Metro official said.

The moment a train leaves a station, a signal will be sent through the optical fibre network and the boards at the next station will start the countdown.

"The system will come in especially handy at times of disruption. Passengers will get to know the exact time when a train left the preceding station," he said.