Mamata takes on 'Tandaviya' Centre over ED summons to Abhishek

If you point one finger at us, remember we have 10 fingers pointing towards you, says Didi on the occasion of Trinamul students' wing foundation day 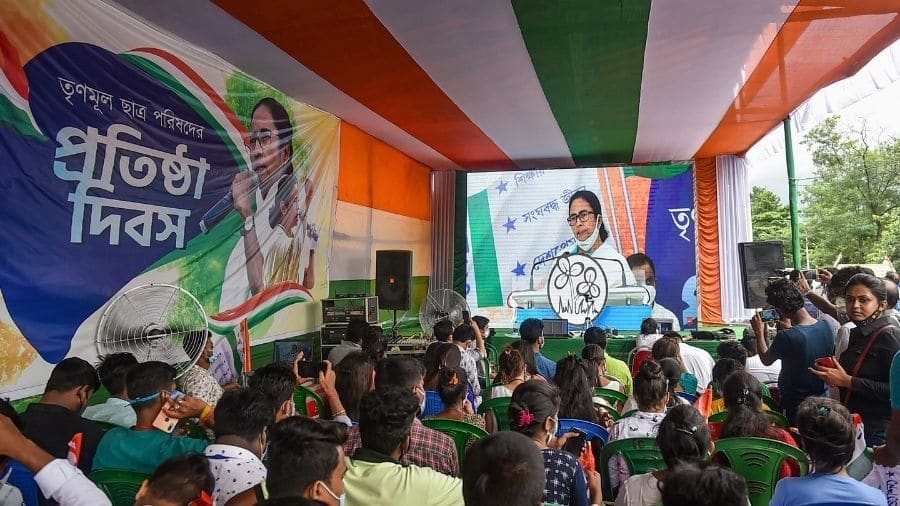 Summons issued by the Enforcement Directorate on Saturday to Trinamul MP and all India general secretary Abhishek Banerjee and his wife cast its long shadow over the annual celebration of the Trinamul’s students wing’s foundation day.

While Abhishek has been asked to appear before the central agency team members on September 6, his wife has been summoned on September 1. Before the Bengal Assembly polls, ED officers had interrogated the MP’s wife and her sister.

The Enforcement Directorate took up the case under the Prevention of Money Laundering Act following an FIR lodged by the CBI in November 2020 related to illegal activities in the Eastern Coalfield mines in Asanasol’s Kunustoria and Kajora.

The ED summons comes within months of the CBI’s arrest of two Bengal ministers and a Trinamul legislator along with a former leader in connection with the Narada sting operation.

“Coal is under the CISF, the ministry is with the Centre, not the state. What were they doing? I know dozen (central) ministers have robbed Asansol. When they came for campaigning in Asansol, they stayed in hotels owned by the coal mafia. Should I bring out the list?” Mamata asked.

“If you point one finger at us, remember we have 10 fingers pointing towards you. I have not been vindictive thus far. Many BJP leaders have been involved with women, I have not arrested anyone yet,” Mamata said, addressing leaders and students.

On August 28, 1954, the Congress’ students’ wing Chhatra Parishad (affiliated to the National Students Union of India) came into being, which threw up generations of leaders including Mamata. However, since the formation of the Trinamul, the day along with most of the Congress in Bengal has been under Trinamul’s domination.

The chief minister’s claim does beg the question why being the administrative head of the state with the Home department under her, Mamata remained silent all this while on these serious allegations and no actions were taken.

“If any woman has lodged a complaint against a BJP leader why did the chief minister not take any action? Was she trying to use the complaint as a bargaining tool?” asked a Congress leader.

Mamata dared  the BJP at the Centre to fight her party leaders politically and and not look for skeletons.

In his address, Abhishek too displayed the belligerence that has been the hallmark of his aunt’s politics. “Threatening us with the CBI, and ED is not going to stop us,” Abhishek said.

Since the spectacular return to power for a third term, Trinamul has taken an aggressive posture against the BJP with Mamata projected as the chief architect of any meaningful Opposition to the Narendra Modi-Amit Shah combine.

Mamata warned the BJP that she too had “sacks of papers” which she would send to the ED. “If our complaints are not entertained by the central agencies we will knock the court’s door,” she said.

The chief minister said since she entered politics at the age of 12-13, she had never come across a government as vindictive as the BJP.

“They tried to kill me in Nandigram,” Mamata said referring to the alleged injury she suffered during the campaign that restricted her movement to a wheelchair.

Though Mamata has denied any post-poll violence in the state, on Saturday she claimed 16 Trinamul workers were killed.

“I have no problem with CBI. Let the NHRC work impartially. They had sent a BJP leader with the team. While the report says five people from BJP were killed in post- poll violence, 16 other victims were from Trinamul Congress. Did you send a human rights team to Hathras (in Uttar Pradesh), to Tripura?” Mamata asked.

The chief minister also called for a conclave of all non-BJP chief ministers in the country to discuss the Centre's  attack on the federal structure.

“They don’t disburse funds collected from GST or disaster relief. BJP is muzzling the voice of  students, teachers, IAS and IPS officers as well as social media. It is a Tandaviya government, monstrous, inhuman government. They are selling everything, it is the responsibility of the students to raise these issues everywhere,” Mamata said.