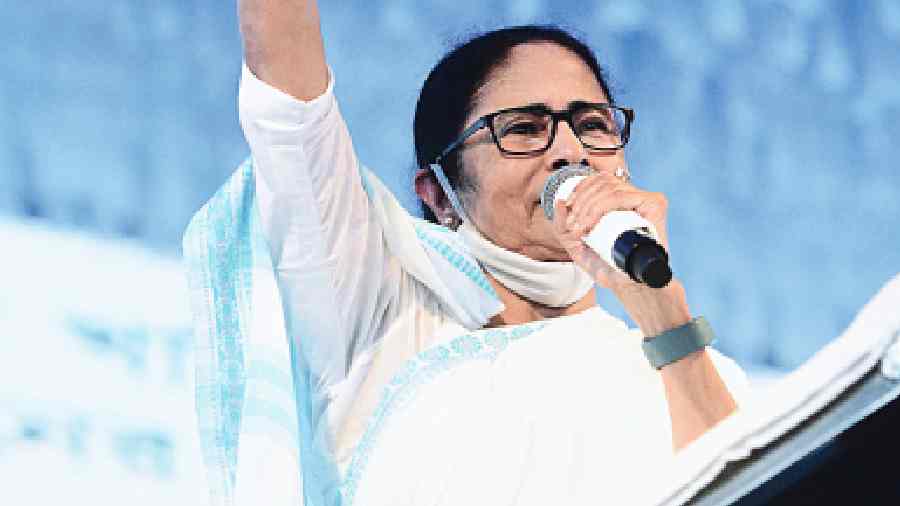 Mamata Banerjee on Monday said she might visit Delhi to demand funds under the 100-days’ job scheme that the Centre has withheld for the past six months citing anomalies in MGNREGA projects.

“People of the BJP have withheld release of funds under the 100-days’ job scheme for six months. I had sent a team of MPs to Delhi. Let’s see what they do, otherwise I have to go Delhi…. Release funds under the 100-days’ job scheme or go,” said the chief minister at an event to distribute various facilities related to agriculture in Burdwan on Monday.

Sources said Mamata raised the issue at the public forum as she realised that people in rural areas were in trouble with the state unable to start 100-days’ job scheme in 2022-23 financial year. The Centre did not approve the labour budget although three months have elapsed in the new financial year.

Not only has the state failed to provide new jobs, it also could not pay wages to those who worked under the scheme between December  and March as the Centre did not approve three crore man-days created by the state.

“The chief minister has already written to Prime Minister Narendra Modi urging him to release money against the additional man-days created by the state last year. But no response has come from Delhi,” said a senior official.

Sources said Mamata raised the issue in Burdwan as this could be a major issue ahead of the rural polls next year.

The 100-days job scheme holds immense importance in the rural areas as it gives employment opportunities to crores of people in rural Bengal.

“As gram panchayats are the implementing agency of the scheme and most rural bodies are run by Trinamul, the chief minister knows that lack of jobs under the scheme could leave her party in trouble. This is the reason she started making it clear that lack of jobs or wages is the fault of the BJP-led Centre and not Trinamul-led panchayats,” said a source.

An official said Mamata was anticipating the BJP’s campaign ahead of the rural polls alleging that Trinamul-led panchayats misappropriated money which led to the situation. “The chief minister wants to stay one step ahead and has started attacking the Centre before the BJP’s campaign,” the official added.

The Centre recently sent a letter to the state explaining why the release of funds was put on hold. The Telegraph had reported on the steps the Centre wants the state to implement to get fresh funds.

“The Centre has asked the state to recover funds misappropriated under the MGNREGA…. The Centre had repeatedly sent letters to the state on this, but failure on part of the state suspended release of funds,” said a source.

A Trinamul insider said since complete recovery of funds allegedly misappropriated was almost impossible, the party’s strategy would be to attack the Centre.

“We will launch campaigns throughout the state to let people know that the BJP-led Centre has suspended release of funds. So, the BJP is responsible for their plight, not Trinamul-led panchayats,” said the Trinamul leader.

Mamata also demanded that funds under the PMAY and PMGSY — also put on hold because of allegations that names of central schemes were changed in Bengal —had to be released at the earliest.

Mamata also met nurse Renu Khatun, whose right palm was allegedly chopped off by her husband to stop her from joining a government job. She warned hospitals that refusal to accept Swathya Sathi health cards of serious consequences.

She urged people to lodge FIRs against hospitals if they refuse to accept the cards. The FIRs, she said, would be followed up with government action against those hospitals or nursing homes.