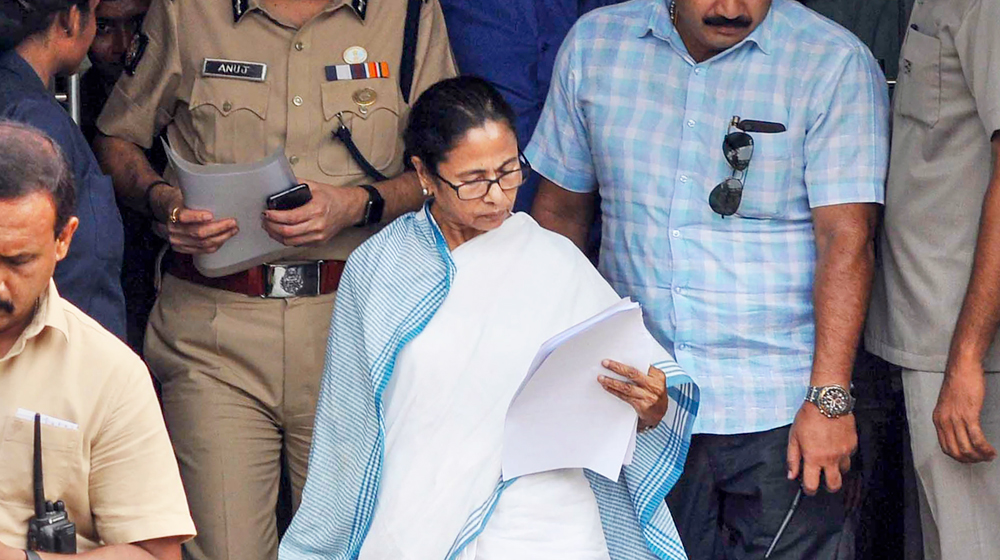 Mamata Banerjee on Monday announced a grievance cell and a toll-free number to deal with complaints of irregularities and corruption in delivery of welfare schemes being implemented by the Bengal government.

The decisions are construed as an oblique admission by the ruling establishment that some beneficiaries of the schemes may have had to pay Trinamul Congress leaders and officials to avail themselves of benefits.

The announcement came after an administrative review meeting convened by the chief minister at Nabanna on Monday. Sources said she had pulled up Trinamul leaders as well as a section of officials for the plight of the poor, who could not get the benefits of the schemes despite huge spending by the Bengal government on various social welfare schemes.

“I have come to know that some aged women were not getting old age pensions. We will conduct an inquiry to find out why they did not get it,” the chief minister said at a news conference after the review.

“There will be zero tolerance for anybody taking money or benefits meant for the people. You will make money from government schemes depriving the people (of benefits) and when you are about to get caught, you will run away to another party. This will not be tolerated. We will strengthen our economic offences wing, police and civil officials,” Mamata said while announcing the formation of the grievance cell in the chief minister’s office.

She said the CMO Monitoring of Programme Implementation and Grievances Cell would be handled by a team led by Trinamul leader Diptanshu Chaudhary. She also announced a toll free number (1800 345 8244) for all complaints. The complaints can also be sent via text messages at 9073300524 or emailed at wbcmro@gmail.com.

The sources said the chief minister did not spare local Trinamul leaders during the closed door meeting.

“She asked the officials to initiate stern action against those who demanded money from the beneficiaries of different schemes without considering their political affiliation,” said a source.

According to the sources, such a step was never initiated in the past few years even though regular complaints came from the beneficiaries.

A Trinamul MLA said the chief minister was forced to take such a step as activities of a section of leaders left the party in a real trouble in some districts.

“We did not win a seat in the Jungle Mahal though the government spent most of the funds under any welfare scheme there. This can happen only when there is a serious fault with the delivery mechanism,” said a Trinamul MLA.

Another Trinamul leader said a section of party functionaries were demanding money from poor villagers to get them enlisted in schemes like Sabuj Sathi and Kanyashree in many districts.

“Maximum complaints had come up from north Bengal districts and the Jungle Mahal. The party was routed in those areas in the Lok Sabha polls,” said another Trinamul MLA.

Some Trinamul leaders said the spoils from government schemes had also led to severe infighting in the party, which was another reason for its poor show in the polls.

While a majority of the Trinamul leaders said the grievance cell and the toll-free number were required to check the party’s erosion in the rural belt, some wondered whether stern actions would be initiated against the guilty at all.

“The chief minister had repeatedly asked Trinamul leaders to stay away from syndicates or illegal trades of sand and coal. Even after her warnings, complaints had come up against many leaders. But no leader was punished,” said a minister.

He admitted that taking action against party leaders was not easy particularly if he was important in the organisational set-up.

“But time has come to initiate some harsh steps to save the party. Hope the chief minister will stand by her decision,” the minister added.