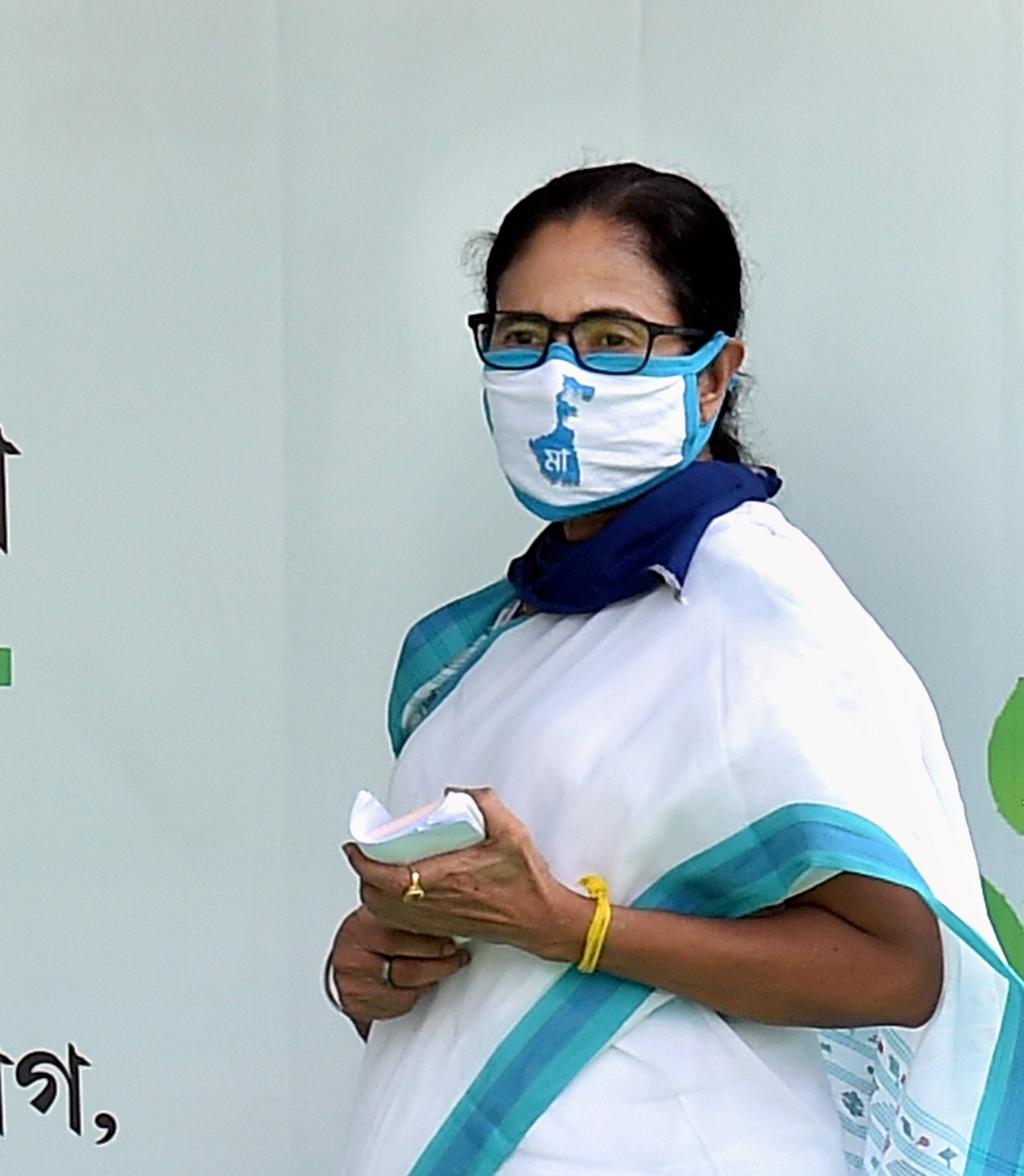 Mamata Banerjee during the inauguration of Re- Greening project on the occasion of World Environment day, during nationwide Covid-19 lockdown, in Calcutta, Friday, June 5, 2020.
(PTI)
Meghdeep Bhattacharyya   |   Calcutta   |   Published 05.06.20, 09:11 PM

Mamata Banerjee on Friday said she felt “really bad” over the BJP’s alleged attempts to politicise tragedies such as Covid-19 pandemic, migrant workers’ crisis and Cyclone Amphan with the objective of electoral gains in Bengal and wondered if it was the right time to do such things.

“I feel really bad with one thing. While on one hand, we are fighting to save the people from the durjog (disaster), the durbhog (suffering), the calamitous Covid-19 and everything else. Then, a political party goes around saying daily: ‘First, throw them (Trinamul Congress) out of Bengal, first vote for us.’ Is this the time for politics? I ask the common people of Bengal,” the chief minister said at an event organised in Calcutta on Friday to observe the World Environment Day.

The Trinamul supremo tore into the BJP — without taking its name — for relentless attacks on her since mid-April with the core theme of throwing her out of power in the Assembly polls next year.

“I am not saying ‘throw Narendra Modi out of Delhi (the Centre)’. Because I think this is not the time. Politics will happen at the appropriate time. Why are you doing this now?” the chief minister asked. “Go and help the people. Go and plant trees. Go and clean ponds.”

The saffron camp has been on a propaganda overdrive regarding Bengal ever since it realised early during the lockdown that the Assembly polls next summer could be won or lost over issues related to the pandemic. Although the Trinamul chief firmly steered clear of politics, the Sangh Parivar did not return the favour and kept on intensifying the attack on Mamata.

“None of you left the comfort of your homes for three months in fear. All of you, fearing the disease, were hiding in your backyards, covering your faces, behind video screens. None was seen on the streets,” Mamata said apparently referring to state BJP leaders.

“I can proudly say we were the only ones here, working daily, from offices to markets, shops to hospitals… we stood by the people, stood by the frontliners, even with those sweeping the streets. Ours is one large joint family, with the help and blessings of the people,” she added.

At videoconference meeting with Trinamul’s senior leaders and MLAs in the evening, Mamata lambasted the BJP for prioritising politics and electoral concerns during tragedies and told them to go to town in a mass campaign being planned against the “malicious propaganda”.

“She (Mamata) said despite Bengal’s good position and the exemplary work by the state government, the BJP is trying to make us lose the perception battle. She said the party must pull no punches in countering the BJP’s deluge of canards, lies and fake news,” said a source who attended the meeting.

Mamata accused a section of the national media of being silent on Amphan’s pummelling of Bengal. “Maharashtra had a storm (Cyclone Nisarga). We expressed our solidarity. Wind speeds of 61-65kmph. To that, the national channels — hoihoi korey — took to the streets. When Bengal faced a storm of 160-165kmph, none did even a line of news,” the chief minister said at the public event.

“The reason for that, it is the teaching of Delhi (the Centre) — ‘Only disrespect Bengal, only deprive Bengal, only malign Bengal’. That is why Bengal never gets even the least respect from them. I say this with sorrow,” she added.