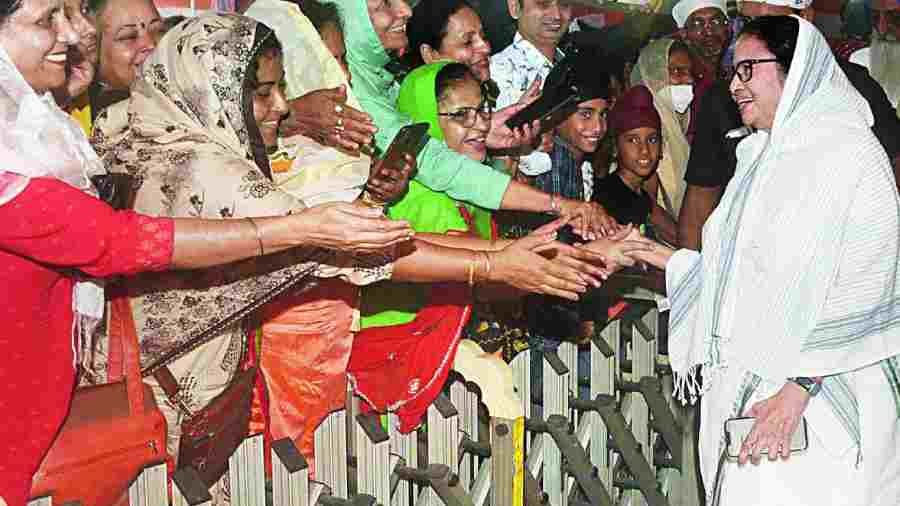 Mamata Banerjee greets people in Calcutta on Monday ahead of Guru Nanak Jayanti
Sourced by The Telegraph
Subhasish Chaudhuri   |   Calcutta   |   Published 08.11.22, 12:42 AM

Mamata Banerjee will start her three-day trip to Nadia on Tuesday as part of her plan to streamline party organisation in the district that has seen a rise of in parts like the Ranaghat Lok Sabha segment.

Trinamul is also being cornered by corruption charges against leaders involved in factional feuds allegedly over spoils from various illegal activities.

Mamata will reach Krishnagar on Tuesday afternoon and is expected to visit Nabadwip town to join the Ras celebrations in the historic town in the evening.

On Wednesday, the chief minister will address a public meeting in Krishnagar town, while on the next day she is expected to visit prominent Ras mandaps in Santipur town, on her way to Habibpur (Ranaghat) before holding an administrative review meeting.

Party insiders claimed that both in the public meeting and in the administrative meeting, the unfinished development work, corruption allegations against party leaders and the factional feuds have been helping the BJP to expand its support base, particularly in the Matua-dominated Ranaghat parliamentary segment, are likely to come up.

“The issue of corruption is a matter of concern for the leadership, particularly after the arrest of a number of leaders and officials in the teachers’ recruitment scam. In the past few months, several complaints have been lodged against party leaders for raising money.... The CM is likely to convey a strong message as termination of Karimpur MLA Bimalendu Sinharoy from the post of Nadia primary school education council’s chairman has given an indication of her plan of action,” a senior Trinamul leader said.

“Tehatta MLA Tapas Saha has been facing a CID probe and these developments are not good for us,” the leader added.

Allegations of malpractice in the execution of the Centre’s 100 days’ job scheme, in which a number of irregularities were spotted and probe ordered, may also come up for discussions in the administrative meeting.

A Trinamul leader in Calcutta said that besides iterating afresh the need for transparency in the administration, Mamata would also focus on reviving the organisation to prepare it for the fight against the BJP ahead of the panchayat polls.

Nadia district, which was once a strong support base of Trinamul, has experienced an erosion in vote bank since the 2019 Loke Sabha polls.

This is particularly seen in the refugee-dominated belt that has an overwhelming presence of the Matua community.

In the 2019 Lok Sabha polls, the party trailed in 15 Assembly segments out of 17 in the district.

In the 2021 Assembly polls, Trinamul could only retrieve nine seats.

But the party lost in all the seven  segments of Matua dominated Ranaghat parliamentary constituency.

“The situation has changed. The fake promise of citizenship by the BJP has misled our voters. There would be different results this time,” Roy said.

However, Trinamul's top leadership is not confident about such a turnaround, mainly because of factionalism in the party.

“A number of changes were made in the leadership to tackle the problem of factionalism. Young faces have been brought to lead, but little has changed in real terms,” an insider said.