Leader of Opposition says, CM’s invite to him at her chamber marked her 'surrender' 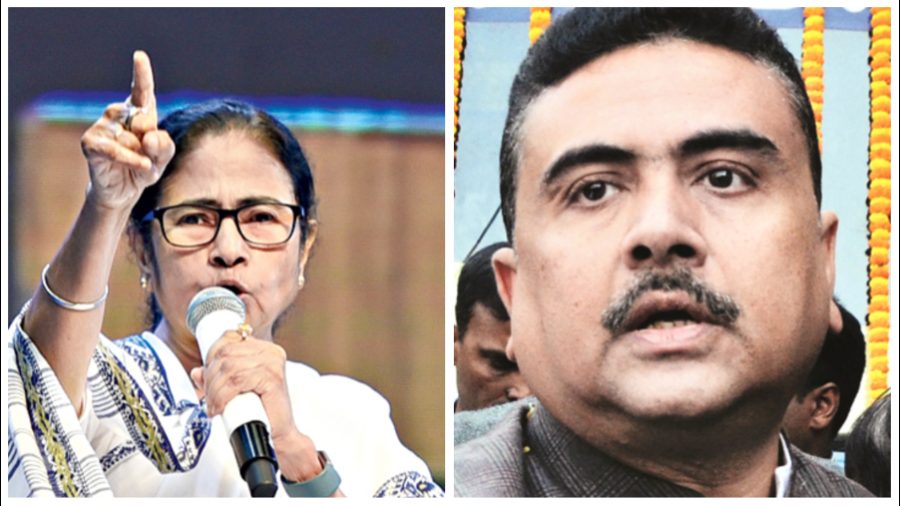 Suvendu Adhikari, leader of the Opposition in the Assembly, said on Saturday that Mamata Banerjee’s invite to him at her chamber on Friday marked her “surrender” to the Opposition.

His claim, however, didn’t please several of his senior party colleagues, who said, both in public and private, that his decision to meet the chief minister had sent a wrong signal to the party ranks.

Adhikari, along with BJP chief whip Manoj Tigga and MLAs Agnimitra Paul and Ashok Lahiri, spent three to four minutes at Mamata’s chamber at the House on Friday following her invitation. Both Mamata and Adhikari had later called it a “courtesy meeting”.

Though the Trinamul turncoat had courtesy on his lips on Friday, he was at his attacking best within 24 hours. “This is Mamata Banerjee’s surrender in front of the Opposition. But we will not let her go.... I will make her the former chief minister of Bengal,” Adhikari told reporters who asked him about the meeting.

Several BJP insiders said that Adhikari was “happy” about the meeting on Friday as he felt it was a recognition of his stature. But the scenario changed in less than 24 hours as several BJP leaders began asking uncomfortable questions.

The first to raise a question was BJP vice-president Dilip Ghosh who alluded to the “old relationship” shared by Mamata and Adhikari, who left Trinamul and joined the BJP before the 2021 Assembly polls.

“They have shared a relationship for several years. I don’t know what happened,” said Ghosh.

“Many people have gone to Kalighat and greeted her. He greeted her in the Assembly. It is their personal relationship, I don’t think greeting someone is a public matter. It is a private matter of respect,” he added, marking his disapproval.

Sources close to Ghosh said he felt that at a time the Mamata-led government has been cornered on corruption and misrule, Adhikari’s meeting with Mamata will give unnecessary advantage to Trinamul.

Sources in the party said that the state president Sukanta Majumdar had to speak to Adhikari on Saturday morning as several party insiders reached out to him with complaints that the meeting demoralised the party’s ranks at a time the Trinamul and the BJP are engaged in a bitter turf war.

Speaking to The Telegraph on Saturday, Majumdar stood by Adhikari and said political courtesy inside the Assembly is common in other states and should be prevalent in Bengal as well. Sources close to him said Majumdar is also worried that the meeting will send a wrong message across party ranks.

Adhikari’s brother and Trinamul MP Dibyendu Adhikari on Saturday invited Trinamul national general secretary Abhishek Banerjee for tea on December 3 when he visits Contai. Sources close to Dibyendu said it was “an act of sarcasm”.

Speaker Biman Banerjee on Saturday welcomed the gesture shown by Mamata of inviting the leader of the Opposition to her chamber.