This was the chief minister's first visit to Jhargram, an adivasi-dominated district, after she rode to power for the third successive term 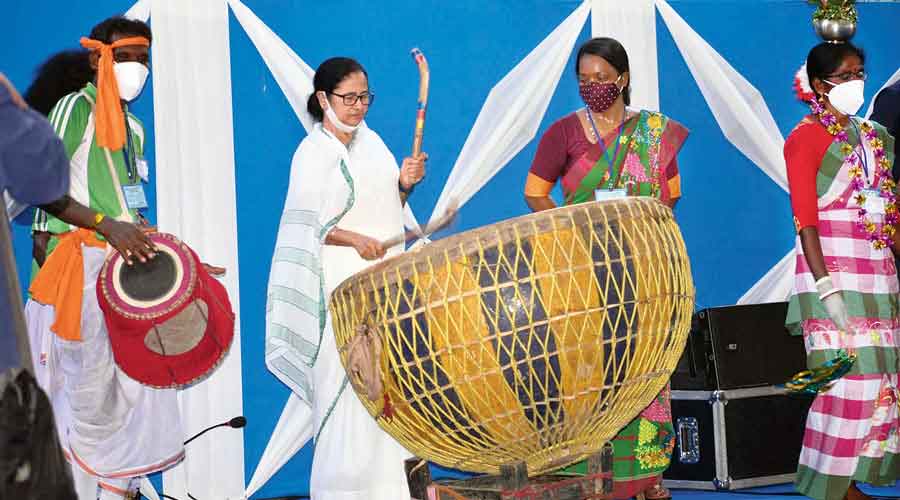 Chief minister Mamata Banerjee on Monday raised her voice to secure land rights of tribal people across the country and ensure that their plots were not made transferable.

“The land belonging to tribal people should not be transferable. The land of the tribal people will be only of them. Our government has made such laws. We want the law to be made countrywide as no one can grab tribal land,” Mamata said from the dais of World Tribal Day celebration in Jhargram on Monday.

This was her first visit to the adivasi-dominated district after she rode to power for the third successive term.

Mamata’s demand is significant as the tribal people across the country fear that their right to land is facing a major threat.

Tribal leaders said in several BJP-ruled states land rights of tribal people had come under threat as the government had tried to tweak law that gave protection to their land rights.

“During the time of the BJP-led government in Jharkhand, it had tried to amend the century-old Chottanagpur Tenancy Act (CNT) and Santhal Parganas Tenancy (SPT) Act. The tribal people of the Jungle Mahal had blessed Mamata Banerjee for her role to save land of adivasis. It is not only Jharkhand, land rights of tribal people are under threat in several states,” said Opel Mandi, the state convener of tribal outfit Bharat Jakat Majhi Pargana Mahal.

“We welcome our chief minister’s demand as it is a nationwide issue for us,” he added.

Sources said in 2016, the BJP-run Jharkhand government had tried to change the CNT-SPT Act that gave protection from trading land belonging to tribal people. The then BJP government in Jharkhand had tried to amend the law to facilitate private players to set up business on tribal land.

Sources said Mamata also cleared her government’s stand on the issue of tribal land while moving ahead with the world’s second largest Deocha Pachami coal mine in Birbhum.

Trinamul insiders said Mamata chose Jhargram to make the statement as her campaign on the vulnerability of tribal land under the BJP helped her reap political dividend in the Assembly polls. A large number of tribal votes moved the Trinamul after the BJP had managed to perform well in the region in the 2019 Lok Sabha polls.

In her speech Mamata did not forget to express her gratitude to the tribal people for helping her come back to power for the third time.

“You blessed us enough. You make us victorious in every seat of Jhargram to bring the government of Maa-Mati-Manush for the third time. I express my gratitude towards you for your effort,” she said.

“If you face any problem, let me know immediately and I will solve it. But I will request you not to misunderstand us anytime,” added Mamata after felicitating around two dozen scholars, students and women from the tribal community.

Mamata also emphasised how her government launched several projects for development of the tribal people, including the opening of around 1,000 schools in several tribal dialects like Santhali, Nepali and Rajbanshi.

She also said her government would form 10 lakh self-help groups to empower the rural women and requested all to attend the government's Duare Sarkar programme that will continue for a month from August 16. Sources said Mamata would not continue visiting other south and north Bengal districts in the next two months.

“We are really happy that the chief minister visited Jhargram. She focused on how her government is keen to focus on social, economic and educational development for the people of tribal communities,” said Lalit Hansda, a English teacher of a high school in Jhargram who attended the programme on Monday.