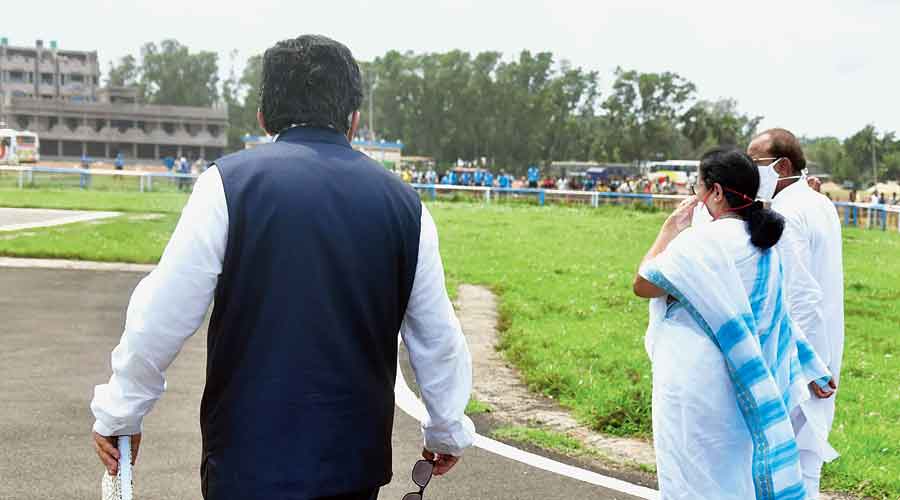 Digest your defeat. Allow me to work.

Chief minister Mamata Banerjee on Saturday flagged a concern that undermines the foundations of the electoral system and federalism, placing it on record that she is being prevented from governing Bengal even after her party won a thumping majority at the hustings.

The grave charge against the Narendra Modi-helmed Centre and the saffron ecosystem brings into sharp focus a change in post-election tactics by the BJP that had so far succeeded in snatching or sharing power in several states in spite of losing the polls. The landslide victory by Trinamul in Bengal has rendered useless the BJP’s usual playbook of poaching and alleged intimidation.

Addressing a news conference on Saturday, Mamata listed the odds she had had to face in the past 24 days during which her primary focus was to battle the pandemic and Cyclone Yaas, which ravaged at least four districts in the state.

“Within minutes of my taking oath on May 5, the governor went after me, issuing statements on some incidents that took place when the state was under the Election Commission,” Mamata said.

“You cannot digest defeat, so from day one you started all this action.”

Now that Mamata has begun the process of delivering on her poll-winning promises like Duare Ration (free ration at doorsteps) and education credit cards for the youth — whose successful implementation would depend heavily on the bureaucracy — the assault has come on chief secretary Bandyopadhyay, the head of the state administration.

“Never in the history of independent India has a democratically elected government been harassed like this…. It is worse than the Emergency,” Mamata told The Telegraph later, regretting the way the Centre was trying to derail her attempts at delivering governance to the people of Bengal.

“They can exert pressure on me, but I will not buckle under pressure and they cannot prevent me from governing,” she added.

Although Modi and Amit Shah, who had led the BJP’s assault on Mamata during the election, had slipped into silence after Trinamul’s victory, the entire saffron ecosystem — with governor Jagdeep Dhankhar playing the lead by issuing statements and visiting certain areas in the state — tried creating a narrative that Muslims were attacking BJP supporters across Bengal with the tacit support of the ruling party.

It was clear that the high-decibel campaign, amplified by the BJP’s IT cell, was aimed at establishing that Bengal was ungovernable and at manufacturing a consensus in favour of President’s rule.

“After May 5, we didn’t allow any incident to occur,” Mamata stressed, recounting the first challenge she had to face after storming back to power.

Managing law and order was not the lone challenge. The priority in the immediate aftermath of the elections was to prevent communal clashes that the Right-wing propaganda machine was striving to ignite.

“You know how the BJP behaves and how they promote hatred…. They spread fake videos and planted fake stories,” Mamata said, explaining how a plan had been hatched to plunge some parts of the state into communal conflict.

Sources in the state police directorate confirmed they had lodged 72 cases linked to fake videos and hate speeches immediately after the election results and forwarded 1,028 requests to social media outlets for deletion of contentious content. Over 400 such posts – such as a video on communal strife in Chittagong in Bangladesh that was passed off as an incident in Bengal -- were deleted in less than three weeks.

While it is true that the state witnessed some incidents of post-poll violence, there is little doubt that the saffron narrative about their communal nature was largely exaggerated.

Although Mamata was pilloried by the entire saffron ecosystem – with senior Union ministers and the governor regularly tweeting about some of the incidents – no word of appreciation came her way after she ensured relative peace, fast-tracked vaccination in the state and made elaborate plans to minimise the impact of Cyclone Yaas that affected parts of Bengal.

Instead, the BJP leaders in the state and the Centre were busy attacking Mamata after the CBI sprang into action and effected the selective arrests of four politicians – ministers Subrata Mukherjee and Firhad Hakim, MLA Madan Mitra and former city mayor Sovan Chatterjee – in the five-year-old Narada case.

Mamata didn’t mention the CBI arrests at her news conference on Saturday. But the arrests do fit into a larger plan to engage her in debates on communal conflict, a law-and-order breakdown and corruption-related cases against Trinamul leaders.

At the 50-odd meetings that Modi and Shah had addressed in poll-bound Bengal, the theme of their speeches had revolved around these three issues. The election results, however, proved that Bengal’s voters had refused to be swayed by these issues and wanted Mamata – who had made a slew of promises to the poorest of the poor, the youth, women and the disadvantaged minorities -- to govern Bengal for another five years.

In Mamata’s own assessment, the Centre’s mischief may cause temporary problems for her government but it will further erode the BJP’s support base in Bengal as people can see how the party is trying to inconvenience and insult the people of Bengal.

During the news conference, Mamata detailed the chronology of events leading to her decision to skip the review meeting that Modi had convened in Kalaikunda on Friday. “Instead of listening to my side of the story, several media outlets, under the influence of the Prime Minister’s office, attacked and insulted me through the day…. Why so much anger at Bengal?” she asked.

Although Mamata has often been mercurial in the past, she has shown remarkable restraint in the past 24 days in the face of one crisis after another -- the transfer of Bandyopadhyay being the latest on this list.

While she was categorical in calling the transfer “unconstitutional”, she urged the Centre to review the decision and resolve it through dialogue so that Bandyopadhyay can work for the people affected by Covid and the cyclone.

To sum up, the message from Mamata was clear: allow me to work.