Mamata Banerjee kicks off projects worth Rs 1,300 crore in Malda and Murshidabad 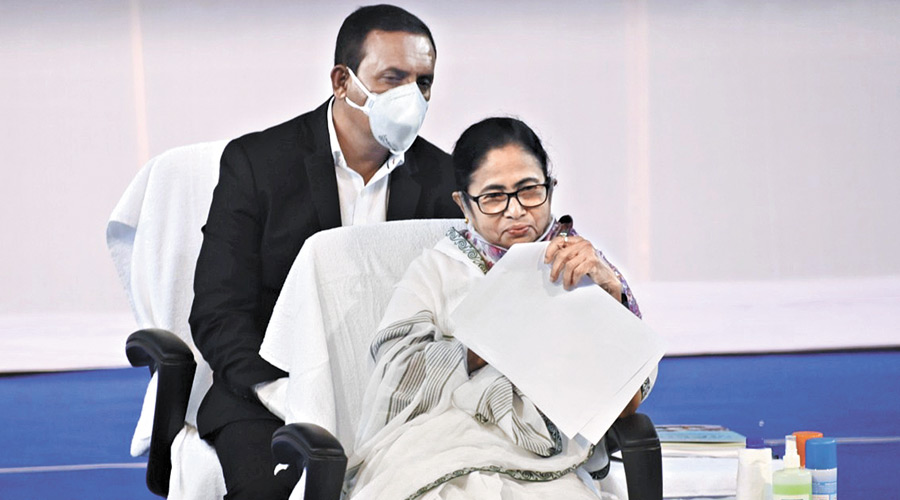 Mamata Banerjee on Wednesday laid foundation stones of and inaugurated projects worth over Rs 1,300 crore for Malda and Mushidabad, two districts that were once known as Congress bastions.

The loosening of purse strings captured the chief minister’s gratitude for the voters of the two districts that gave the Trinamul Congress 28 out of 34 seats in the recent Assembly polls.

“You have given us so much of your love and blessings.... I thank you for your unflinching support,” Mamata said at one of the administrative review meetings she held in Malda and Murshidabad.

The thanks giving assumed significance as she had said several times in the past that although people of the two districts had always attended her political rallies in large numbers, they had not voted for her.

In 2011, when Trinamul had allied with the Congress, the party had bagged three seats from these two districts, while the Congress had won in 21 constituencies. The Left had got the remaining 10 seats.

Five years later, in 2016, when the Left and the Congress joined hands, Trinamul could win four seats in Malda and Murshidabad, while the Congress’s tally increased to 22 seats. The Left secured six seats, while one seat each went to the BJP and Independent.

“But there hasn’t been any discrimination since we came to power.... We will work harder for your development,’’ Mamata said as she launched projects related to water supply, road and sports complexes .

The chief minister added that she would be visiting the two districts more often in the next five years. “I would even go to the subdivisional headquarters and hold review meetings there,’’ she said to a round of applause in Murshidabad.

In her first visit to the districts after assuming the office of the chief minister for the third time in a row, Mamata made it clear that she would lay special emphasis on the development of Malda and Murshidabad, which have been deprived of any organised industry.

While addressing the elected people’s representatives of the districts and officials, Mamata said the government had tried its best to deliver benefits to the people despite the financial constraints facing the state exchequer. ‘‘We have done almost everything in terms of creating physical infrastructure or rolling our social welfare schemes.... Now, my focus is on creation of job opportunities,” she said.

In both the meetings, she told the elected representatives not to seek new projects and urged them to devote their energies in ensuring proper delivery of the welfare schemes that the Trinamul government had launched.

She prodded the local businessmen into grabbing opportunities in sectors like textiles, food processing, animal husbandry, especially in poultry and dairy sectors, agri businesses and tourism, besides explaining how the government would help ventures in these sectors.”

“You get in touch with district officials if you have project plans and they will take it up with the departments concerned,” she said during her interactions with representatives of local trade bodies.

Unlike the administrative review meetings she used to hold in her first and second terms in office, Mamata has been allowing more time to local businessmen in the interactive sessions of such sessions in the third term.

“Our focus is industry and that is why I am inviting you to attend the Bengal Global Business Summit in next April, ” said Mamata.

In both the meetings, she told district Trinamul leaderships that they should work together, keeping aside mutual differences.

“Have you people stopped quarrelling with each other? You should abstain from such acts, join hands and work together for development of people,” Mamata said, addressing party leaders Krishnendu Narayan Choudhury and Nihar Ranjan Ghosh at the meeting in Malda.

Mamata also asked veteran leader and former minister Sabitri Mitra to work jointly with all the leaders, including the new office-bearers of the district party and the elected representatives.

In Murshidabad, she told the MLAs to work in tandem with local panchayat representatives to deliver on development.