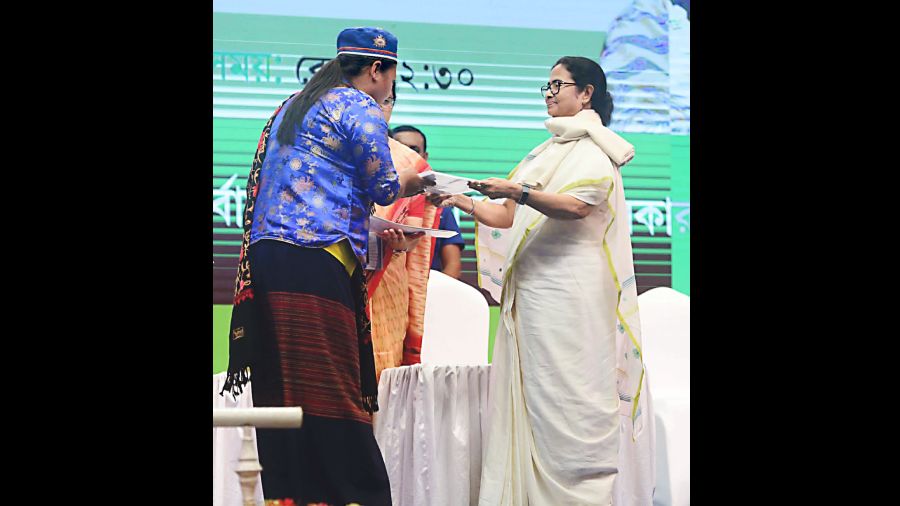 Mamata Banerjee at a programme in Calcutta on Wednesday to distribute pattas to nearly 4,000 landless people in Bengal
Meghdeep Bhattacharyya   |   Calcutta   |   Published 24.11.22, 04:39 AM

Mamata Banerjee on Wednesday asked the people of Bengal to ensure that their names were accurately on the electoral roll to avoid getting sent to detention camps.

She took care to explain that the electoral roll revision was going on and the process would continue till December 5. Mamata urged the people to visit the centres, check their names and the names of their family members to ensure that the names were not deleted.

It was apparent that the chief minister was trying to sensitise the audience to the possibility of the deletion of names from the voters’ lists. The BJP has been alleging that the electoral rolls in Bengal are full of the names of bogus voters, most of whom are illegal immigrants from Bangladesh.

“People who came from Bangladesh before March 1971… it is the government’s duty to take care of them. Sometimes, these people are bluffed and told they aren’t citizens of our country. Well, if that is the case, how did these people vote?” Mamata asked while attending a programme where land pattas were being delivered to homeless people.

She had played a lead role in the protests against the Citizenship Amendment Act in 2019-20.

“You became the Prime Minister because of these people’s votes and today, you make lofty claims about giving them citizenship. Isn’t that demeaning to the people who have lived, studied and worked here all their lives, as have their kids?” Mamata asked.

“This NRC plan has started again…. One needs to be very careful because tomorrow, the Centre might say your name is not in the NRC and will send you to a detention camp. We will never let this nefarious agenda be fulfilled.”

“I am saying this because these things have happened in Assam, we saw how many lakhs of names were removed from the NRC. We had taken up such major agitation back then too… it is a shame, a shame,” added the chief minister.

Human rights defender Teesta Setalvad had said in the city on Saturday that she feared the Narendra Modi government would begin implementing the “bhayanak shaitan (terrifying devil)” of the citizenship tripod — the National Register of Citizens (NRC), the National Population Register (NPR) and the Citizenship (Amendment) Act (CAA) — next year.

Seniors in the Trinamul Congress said Mamata’s speech was indicative of her intention to use the fear of the resurrection of the citizenship “demon” as an emotive poll plank and use it to ensure maximum enrolment of names on the electoral lists that she believed would enhance her party’s chances in the panchayat elections next year.

“Nobody will hand you your rights, you have to snatch them for yourselves…. I am ready to die for the people. I will never betray the people and do politics, that is not how it works for me. I don’t discriminate,” said the Trinamul chairperson.

Responding to Mamata’s stand, Suvendu Adhikari of the BJP vowed that the citizenship exercise would be carried out in Bengal as well and dared her to stop it.

In her address at the government event, Mamata attacked the BJP-led Centre over other issues such as the dearth of fertilisers.

“This is a central government issue, as states buy fertilisers from the Centre. We have already written to them thrice, but there has been no response,” she said. The chief minister said Bengal needed 2.2 lakh MT of fertilisers and had received only 77,000 MT.