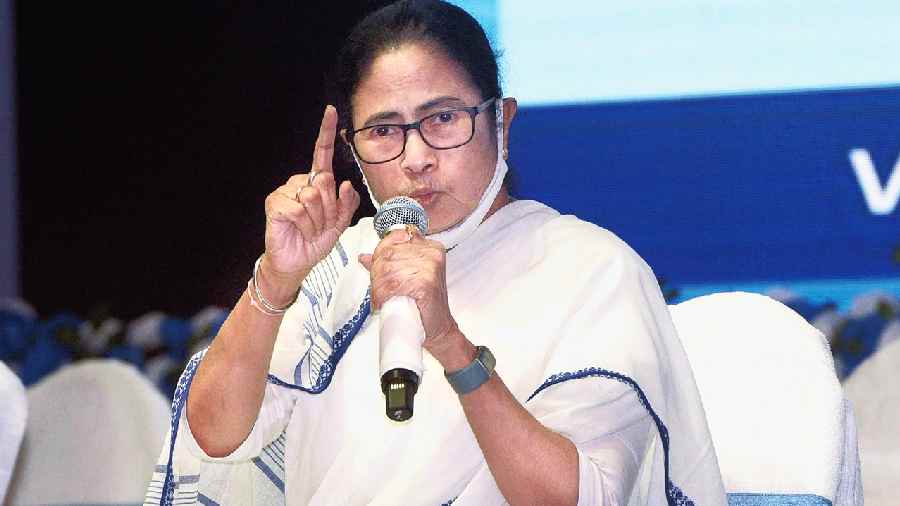 Mamata Banerjee on Tuesday asked the departments that execute development projects in the state — collectively called works departments — to set up a “crisis management fund” and engage MGNREGA job card holders in the projects of the departments.

Explaining the trigger, the chief minister confirmed the state government’s inability to pay wages to those who worked under the 100-day job scheme since December as the Centre stopped sending money for it after November 2021.

“I want a committee headed by the chief secretary to be set up to find out a way to pay workers under the 100 days job scheme even if the Centre does not release funds. Departments like PWD, irrigation, panchayat, agriculture and horticulture need workers and departments have budgets to pay workers. A crisis management fund may be created with funds of those four departments and labour payments can be made from there,” Mamata said during an administrative review meeting in Midnapore.

Sources in the government said this was a temporary step as MGNREGA workers in Bengal were not getting paid since December.

The bureaucrat explained that Mamata wanted job card holders to get some money right now so that their grievances could be addressed to an extent. Job card holders can also be engaged under development projects carried out by state departments.

“Primarily you prepare for this alternative fund. We will resume the work (100 days) after the fund comes (from the Centre),” said Mamata.

Mamata also made it clear that this step could not be a permanent solution as state coffers were struggling.

Sources in the administration said that Mamata was worried as her party is set to face panchayat polls next year.

“The rural economy is heavily dependent on the 100 days job scheme,” said an official.

At one point during the meeting, Mamata pulled up the PWD for pushing up project costs and went to the extent of asking local authorities not to engage the PWD in projects. “Why do they (PWD) demand so much money? They (the PWD) primarily fix Rs 5 for a project and within a year they demand Rs 15 for the same project citing cost escalation. Don't assign work to the PWD,” said the chief minister.

She raised the issue after the West Midnapore DM Rashmi Kamal said that the PWD sought Rs 30 to Rs 40 crore for two gates and a community centre.

“What? Rs 30 crore for two gates and a community hall? A gate in Kalighat was build for Rs 50 lakh,” Mamata said.

She refused to sanction new bridges and roads even when elected representatives demanded them at the meeting.

“She made it clear that the state cannot spend handsomely on projects as coffers don’t permit it. This is why paying wages through the works departments could be an arrangement for a short period. In the long run, the state has to ensure that the Centre clears extra mandays,” said a bureaucrat.

Mamata has already written to Prime Minister Narendra Modi requesting him to clear the due wages of Rs 3,000 crore.